Youmacon is a huge anime convention located in downtown Detroit, Michigan at the Detroit Marriot at the Renaissance Center and the Cobo Center.  It began in 2005, started by a small group of friends wanting to bring an anime convention to the Detroit region.  Its first year saw an unexpected attendance of over 1,000 individuals.  From there, Youmacon has become one of the fastest growing fan conventions in the country.  Last year, Youmacon drew an international audience of over 12,000 individuals to downtown Detroit for the weekend, coming from as far as Great Britain, Japan, Sweden, and Australia.  Youmacon is now a privately owned business run by native Detroit Entrepreneur Morgan Kollin.

There were a total of four hotels at which guests for Youmacon were located this year: the main convention hotel of the Detroit Marriott at the Renaissance Center, and the three official overflow hotels of Holiday Inn Express, Greektown Casino, and the Crowne Plaza Downtown Detroit.  All but the Crowne Plaza sold out.  Personally, I stayed at the Crowne Plaza, which was located across the street from the Cobo Center.  As was the case with every other convention I’ve been to, the hotel staff was very accommodating to the con-goers (offering discounted room prices and a buffet (an admittedly pricey one) each morning at the in-house restaurant).  They were helpful and kind, which is something geeks and obsessive fans aren’t always used to coming from professionals.

Attendees can pre-register online before the con or purchase badges at the door.  Pre-registered con-goers can get through registration more quickly and at earlier times than those who choose to buy their badges at the convention.

While I couldn’t make it in time for pre-registration on Thursday evening due to other obligations, I was informed by several con-goers later that it was incredibly disorganized.  At least several hundred people were there for pre-registration badge-pick-up that evening and nearly trampled each other when the doors finally opened.  However, it seems that no one was badly injured.  I was told that pre-registration took quite some time that night (an hour or two for some people).

When I arrived on Friday afternoon, registration seemed to be running more smoothly.  The line wasn’t very long and was moving relatively quickly.  I did have some trouble picking up my Media Pass (which offers several of the same benefits as a Platinum Pass, without the freebies), as very few of the staff members working at that time knew where to send me in order to pick it up.  After talking to several staff members, though, I was eventually directed to the right place.

The weather for Youmacon was pretty gloomy.  It was cloudy, cool, and rainy on Friday and Saturday, with the sun finally deciding to show its face on Sunday.  Most con-goers had come prepared, though, with umbrellas or windbreakers or other suitable attire to protect their cosplays.

As I already mentioned, I arrived a day late to the convention, but was given excellent directions of where to go by both the staff at the Crowne Plaza hotel and the convention itself.  Registration was easy enough to find.  The staff members for the convention working at registration were very helpful; even if they didn’t know specific answers to my questions, they directed me to someone who they thought might.

Throughout the convention, though, it was often hard to find staff members in order to ask them questions.  More than once, I spent ten minutes or more searching for a staff member.  Granted, Youmacon is a large convention, which may have contributed to the difficulty in finding staff members on occasion.

One thing that sort of put me off right away was the fact that the schedule for Youmacon was not released until 2 days before the convention started.  This made planning for the convention very difficult.  I didn’t really have much time to plan before actually arriving, which made things somewhat nerve-wracking. 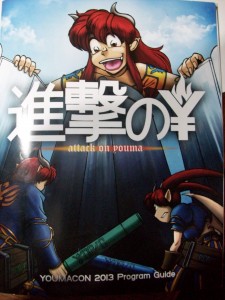 Open on Friday afternoon from 3pm to 6pm, the Japanese-style Maid Café requires the purchase of a $10 ticket in order to attend.  The first hour of the Maid Café (for which advanced reservations are required) gives an opportunity for con-goers to meet several of the special guests at the convention.

A concert performed by all three musical guests at Youmacon this year: Steam Powered Giraffe, Loverin Tamburin, and Random Gibberish.

Ten contestants compete against one another in a contest similar to American Idol.

Both Friday and Saturday night include dances that promise to “blow the doors off the ballroom”.

Skits put on by cosplayers to show off their hard work in craftsmanship, performance, or both.  This event lasts for three hours on Saturday evening.

There are far too many guests of honor to mention here, so I’ll simply mention a few of the more well-known ones:

A full list of guests can be found here.

I wanted to mention a couple of things about the Dealers’ Room at Youmacon.  First of all, the Dealers’ Room and Artists’ Alley were both located in the same massive room, with the former being on the left half when you enter the main doors and the latter on the right half.  Most conventions I’ve been to in the past have had separate rooms for each of these events (largely due to space constraints), so this was an interesting setup.  I actually liked it a lot, because it focused all the potential spending in one place.

One really strange thing about the Dealers’ Room, though, was the fact that several of the booths there weren’t for dealers.  Instead, they were set up for various conventions around the area.  This is something I’ve never seen at a convention before.  (Granted, I’ve mostly been to small conventions; this might be something that happens all the time at larger conventions.)  I was told by a staff member that each of these conventions rents space in the Dealers’ Room in order to promote their own events, and that this is the only way outside cons are allowed to advertise.  No other conventions may pass out fliers for free or even approach con-goers about their conventions.  To me, this seems like a strange practice.  Conventions have enough trouble raising money in order to get guests and simply pay to rent the spaces they use; why charge them even more money to spread the word about their events?

I just want to take a little bit to mention some of the panels I attended.

FMA: Through the Eyes of Maes Hughes

Q&A session with Sonny Strait, the voice of Maes Hughes.  He did voices from several characters throughout the panel, discussed the assumed name he sometimes uses for certain roles, and talked about his favorite scenes to record as various characters.  He also talked about his directing experience in anime and his other various projects, including writing his own comic book.  At the end of the panel, he gave away FMA: Brotherhood Blu-Rays to the person who could do the best Maes Hughes impression.  The panel was incredibly fun and informative.  Afterward, he sold copies of his comic with signatures and portraits of the buyer’s favorite character he voices.

How to Talk to Voice Actors with 91.8 The Fan 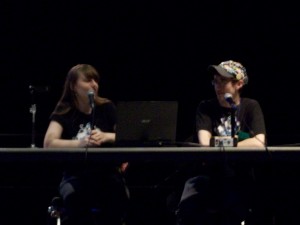 Staff members from 91.8 The Fan led a panel discussing do’s and don’ts of talking to voice actors, based on their experience interviewing 450+ voice actors for their online radio website.  Very informative and fun panel, filled with jokes and real-life examples of really wrong ways to talk to voice actors.

Literally a panel about “educating” Todd Haberkorn: he asked the audience questions about anime and fandom in general, for the first half of the panel.  In the second half, he showed clips from a current project of his, Star Trek Continues, a live-action web series with a cast including both Haberkorn and Vic Mignogna.

A panel in which several of the guest voice actors (Sarah Natochenny, Kyle Hebert, Caitlin Glass, Noah Watts, Tom Wayland, and Adrian Hough) cold-read an issue of Sandman.  Later, they invited members of the audience up to try their hand at voice acting alongside them.

I attended several other panels, but the above were the most noteworthy ones.

There are plenty of events to attend at Youmacon, and this is one of the largest conventions in the Midwest, if not in the country.  Youmacon is constantly growing, starting out as an event hosting just over 1,000 attendees, to 12,000 last year (2012).  Numbers for this year (2013) aren’t out yet, but I’m sure Youmacon has grown yet again this year.

The special guests were phenomenal.  This was an all-star list of guests, which was really shocking to me.  There were over a dozen voice actors, several producers, writers, and other industry big-shots, and three extraordinary musical groups.  Most conventions I’ve been to in the past have had maybe one or two really big guests, and a bunch of smaller ones, so this line-up was amazing.

There were some downsides to Youmacon, though.  As previously mentioned, it was often difficult to find staff members when I needed to.  This was wrapped up in the larger problem of things often being quite disorganized.  Lines to wait for panels, autographs, or live programming were often jumbled and disorganized.  There were usually supposed to be separate lines for those with Basic Badges (one-day or three-day) and those with Platinum Badges, but exactly where those lines were supposed to be was different for almost every panel.  Often times, Basic Badges would sneak their way into Platinum Badge lines and thus get into panels, autograph lines, etc. before some Platinum Badge holders, who had paid for the privilege of priority entrance into these events.

Another disorganized aspect of this convention was the fact that actually getting attendees into and out of panel rooms usually took far longer than it needed to.  Panels routinely started late, up to thirty minutes for some of the ones I attended.  While some amount of scheduling leeway should be expected, half an hour of delay is quite a lot.  This made several panels start late.  However, the staff generally handled this very well and worked hard to get things back on track.

On top of the disorganization, I was at Youmacon with a Media Badge, and was thus meant to receive certain press privileges.  I was told both before the convention through email and at the convention when I picked up my Media Badge that I would have the opportunity to attend group press interviews with some of the guests, but was never given a schedule of any press interviews, despite asking numerous staff members.

It’s hard to say whether or not the pros outweigh the cons when it comes to this convention.  Some people may be able to handle the disorganization and the inability of convention staff to communicate effectively with press members.  Perhaps the ability of Youmacon to invite such a huge host of important guests would be worth dealing with the potential problems the convention has.  Then again, some people might find it hard to plan for a convention when they only know the schedule 2 days in advance, especially if they plan to travel from a ways away (like the international attendees previous years).  Some people might prefer a convention that seems a bit more organized.  Personally, I prefer smaller conventions to something this size.

The following is a collection of pictures I took of various cosplayers.