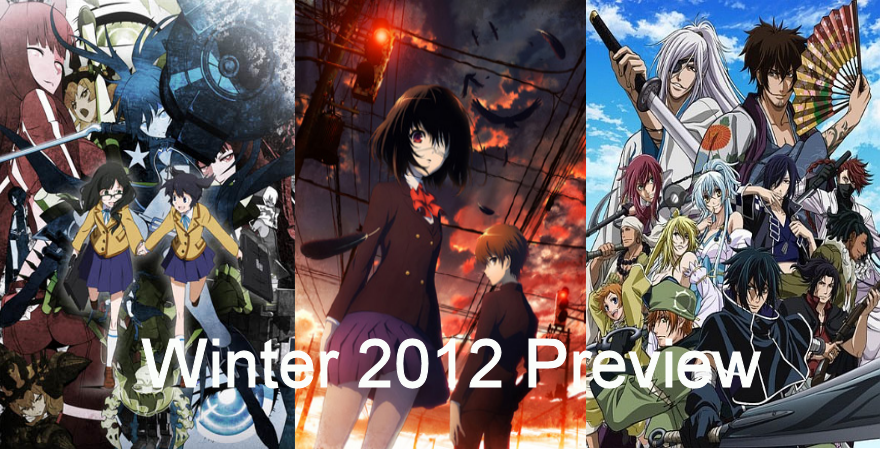 So with all of the first episodes of the winter season already out, it's time to just sum up all of the series and separate the good from the bad, the winners from the losers, the... well you get the idea. Unfortunately, due to lack of writers available (there only being 2 of us and Sintaku is actually quite busy lately, so really it's just me) even if the anime is good, it may not be reviewed! So let's start sorting the Winter 2012 anime's into winners and losers (no sequels to be reviewed!)

2. Area no Kishi - I can just see it getting more interesting, plus an up-to-date sports anime is really what I was looking forward to watching and reviewing. (Weekly Review)

3. New Prince of Tennis - Just fun to watch, though I don't see myself reviewing this series. (No Review)

4. Mouretsu Pirates - I am a sucker for a space story plus the first episode was fun to watch, Weekly Review; Just because the pace is a nice change from all of the other anime's I'm currently watching but Episode 3 and 4 will be reviewed together

5. Another - Great series, especially since it's a horror story. (No Review - not enough energy)

The Losers (No Review)

1. High School DxD - I watched the first episode in order to not be unfair on a new series but ended up wasting 20 minutes of my life. My hunch was right.

3. Recorder to Randoseru - I didn't realize it was only 3 minutes long, which completely set the tone of this anime being a boring comedy.

4. Poyopoyo Kansatsu Nikki - Another anime around 3 minutes long which failed to be funny or a good slice of life piece.

1. Papa no Iukoto wo Kikinasai! - Nice idea for a story, but I just couldn't laugh or get into it. (No Review)

2. Rinne no Lagrange - Too much hype around it, just don't get why! Seems like another average mecha anime to me, but since there is so much confidence behind it - second season due to come out this summer, I'm giving it one more episode. (Possible Review)

3. Daily Lives of High School Boys - Granted, it was funny but not exceptionally so. (No Review)

1. Senhime Zesshou Symphogear - FML this one is frustrating, but it shows promise so I'm giving it the seal of approval for the next 1 or 2 episodes. Weekly Review; Since I got myself sucked into the story (just a little bit)

2. Inu x Boku SS - I might have got my hopes up, but I need to watch the second episode which will hopefully bring more to the table (Possible Review)

Currently it's a battle between: Mouretsu Pirates, Senhime Zesshou Symphoger, Inu x Boku SS, and Rinne no Lagrange. Based on the first episodes, I favour the first over the last two, but that can change by the end of the next episodes. There is a possibility of me reviewing more than just one of these series since Black Rock Shooter isn't out until February but that all depends whether the series lend themselves to easy reviewing i.e. me enjoying them enough.

UPDATE: I chose to stick with Mouretsu Pirates and SZS. Unfortunately I still haven't gotten round to watching Rinne no Lagrange but I couldn't get that much into Inu x Boku SS but who knows things might change.