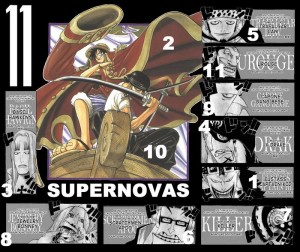 So as I assume were all anticipating to see the Straw Hat crew make it to the New World, I thought it might be fun to consider which of the supernovas will actually become infamous pirates.

For the purpose of discussion, we'll ignore Luffy, Zoro because they're obviously going to take longer to make it there, Killer because he's second in command of the Kidd pirates and of course Jewellery Bonney who has already failed by being captured. So that leaves us with a grand total of 7 supernovas to consider but who if any will succeed at becoming infamous

I'm going to break down into who I think will join the ranks of the best and those who are doomed to suffer the fate of most pirates. Let's start with the the losers:

The easiest that has been to predict would have to be the fate of Capone "Gang" Bege who last we saw was being sucked up into an alien like spaceship. His power does look interesting but questionable all at the same time.

Scratchmen Apoo displayed some interesting abilities in Saobondy which could have been dangerous in a battle scenario, but last time we saw him he was being chased by a pack of wild boar off a cliff with his crew. Is he really going to survive if he can't even take on wild animals In my opinion probably not.

We then move onto Urouge the "Mad Monk". This one I can't really call; he hasn't displayed enough strength at Saobondy for me to consider him a good enough pirate, plus it does look like he drew the short straw when it came to getting to the first island in the New world. All I can say is he's got a long way to go.

And now for the winners:

First we have Eustass Kidd who has already hit the ground running, taking down pirates who are too weak to survive. Based on his no-nonsense personality, lack of care for anything other than achieving the ultimate goal of becoming pirate king and a bounty of 315 million he does seem to be a very likely future enemy for the Straw Hat crew (especially since he's itching to fight Luffy). Kidd may gain advantage by having better understanding of the Yonko and the power balance, but his true winning factor is his ambition which is on par with Luffy's (though displayed in a significantly different manner).

A tough call for Basil Hawkins. We know he's powerful and has some obscure and terrifying powers as demonstrated by his bounty, but I'm not sure he would actually bother advancing through the New World since he's settled nicely at Foodvalten (seemingly the nicest and calmest of all the islands currently shown to us in the New World). We'd also have to take into account his superstition and whether he believes his fate has already been decided. If he decides to progress, he would make a formidable opponent.

X. Drake is another winner, but could face more danger than the others. You have to respect any rookie who has the audacity to indirectly challenge who I gather to be the most ruthless of the Yonko and gain pleasure in doing so. His power is also immense as shown by his ability to take out a pacifista on his own, but as I said if he truly incurs Kaido's wrath he could be done before making his way to the next island.

And finally, though he's a bit of a dark horse my money would be on Trafalgar Law. His reputation and power is up there with the best but what really stands out is his unexpected attitude towards rushing to the New World. A little bit suspicious and in my opinion the man's definitely got a plan, so all I would say is that Kidd, Drake and Luffy better watch there backs before Law launches a sneak attack! 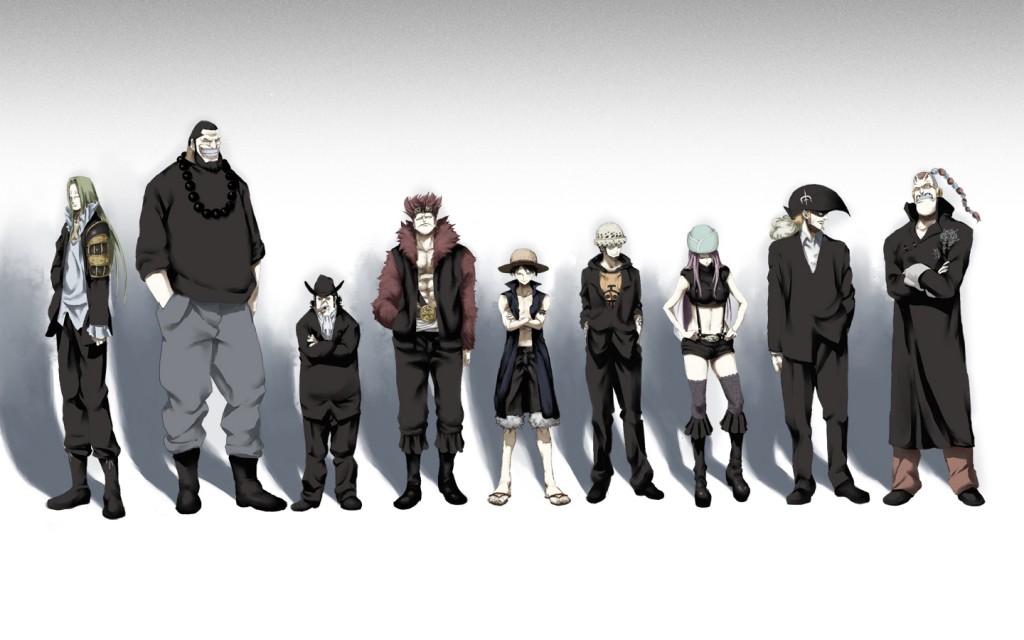