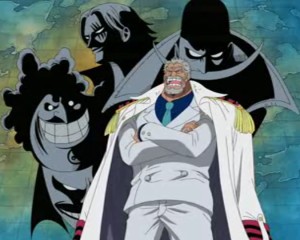 This post should really not be read by anyone who is not up to date with the manga or those who only watch the anime as it does contain a minor yet rather crucial bit of spoiler information.

So as the Straw Hats move ever so close to entering the New World, it must have crossed all of our minds that Oda will be introducing the remaining Yonko - Charlotte Linlin AKA "Big Mam" and Kaido. So what do we already know about these mystery characters

First of all it goes without saying that their strength is incredible. They possess the same pirate rank as Whitebeard did and Shanks currently holds so we know their not pushovers, so we can also assume they could very well have extremely powerful second's in command as the trend has currently been (Marco for Whitebeard and Benn Beckman for Shanks).

Now individually speaking, we have heard Kaido's name popping up frequently and most of the time it was depicting his treachery. We first heard about him from Gekko Moriah who had made to the New World, only to be defeated by Kaido and his vast crew (this became the reason why Moriah believed that he could beat Kaido with an army of the undead). Moriah might not have been the strongest of the Shichibukai but his bounty value coupled with his Devil Fruit do make him a rather formidable opponent at times, so Kaido has already established himself as being ruthless and powerful enough to eliminate an entire crew.

Kaido's also the most dangerous of the remaining Yonko but not because of his strength; his treachery makes him shameless in holding any type of honour code amongst other pirates and this plays into his favour. We remember the time when he tried to stop Whitebeard's fleet with an ambush but had his plans thwarted when Shanks intervened, however the focus on that point shouldn't be on his failure to attack Whitebeard. Don't forget Whitebeard had a fleet of 46 ships accompanying him to Marineford, so that means Kaido would have had at least that many pirates in his crew........Wow!

From the information available to us, it would seem Kaido has a strength in numbers approach to becoming one of the most powerful pirates and that's probably why he couldn't defeat Shanks, whose crew are amongst the strongest in the world, in a fight. One thing has bugged me; why hasn't he taken out X. Drake Of course it's possible that Drake could have been able to fight off Kaido, since after 2 years in the New World he has become infamous but it may also just be Kaido not caring about his subordinates enough to avenge them. Next up the most powerful female pirate: Charlotte Linlin.

Big Mam is probably more shrouded in mystery as Kaido since we didn't even know her epithet until Eustass Kid made his comments on the Yonko and the power balance. All we know is that she loves sweets and hence she protects Fishman Island on the condition that they send her many sweets. Her power is obvious as well of course but because of Luffy's desire to meet her and him thinking she's a good person (from just hearing that's she's protecting Fishman Island), she might actually be more compassionate than Kaido as she also lacks the reputation for being ruthless.

I have to say this somewhere so might as well be now; my biggest theory on Big Mam is that she's "Marriage Proposal" Lola's mother. Why I think her Jolly Roger is a slight give away as the look resembles Lola almost too closely but I think a better reason is that Lola gave Nami a Vivre Card and this could very nice lead to the Straw Hat's meeting one of the Yonk!