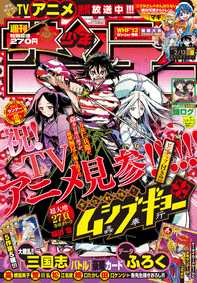 The final Weekly Shonen Sunday anime project for the year has been announced. Much to my disappointment, it's not Denpa Kyoushi. It's Joujuu Senjin!! Mushibugyo.

The manga is an alternative spin-off of the original Mushibugyo that ran from 2009 to 2010. Production I.G made an anime commercial for the manga last year, though they are not attached to the series.

This is the one series I haven't heard about. It also took me by surprise since the series doesn't rank highly on Weekly Shonen Sunday's line-up. Not to mention, there's been zero talk about this manga on any blog, site or forums I frequently visit.

With that, here's the list of the 8 Weekly Shonen Sunday anime projects for 2013:

Really just more Silver Spoon news. Silver Spoon's anime will run in the noitaminA block and the manga has 6.5 million copies in circulation.

With Katanagatari re-airing this upcoming Spring, we can expect the anime in the Summer or Fall.