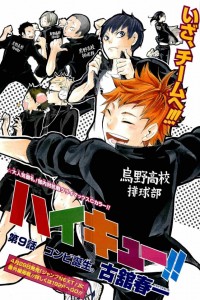 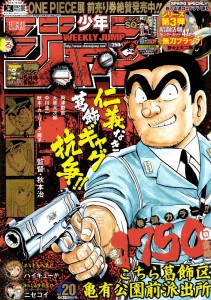 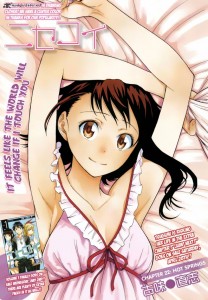 Quite an uneventful set of chapters in this issue of Weekly Shonen Jump. These chapters are probably the more forgettable ones but were still enjoyable to an appropriate level.

It's about that time in a new arc when a new antagonist was introduced in One Piece - Smoker and Law's reappearance was good but let's face it, with One Piece a new antagonist needs to be introduced every arc just because that's Oda-sensei's style. I was wondering how Trafalgar Law would react to seeing Luffy again, and his ulterior motives remain unknown but since he's now teamed up with presumably this arc's new protagonist Ceaser Clown.

I have yet to get fully excited about this arc and I was expecting another chapter chock full of information and progression in the story, which I did get and luckily we got a nice dose comedy in this chapter; mainly centring around the body swap situation and focusing most on Sanji being stuck in Nami's body thus allowing pure hilarity to ensue.

I don't like this manga anymore, well, possibly. I wasn't pleased that there have now been consecutive chapters with flashback's, almost making me question whether Kishimoto-sensei has run out artistic touches which he can use to make the story more interesting. I will say that Kabuto's past never crossed my mind, so it might have been what made me dislike the chapter since I'm anxious to see this fight settled.

Kabuto's past was just like all the characters who had been used by others and so it became even less interesting to continue reading about. Naruto has surely gotten boring these past few weeks. 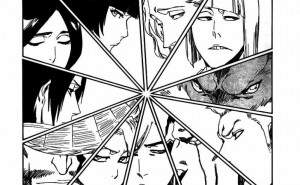 Ooh Gunreisei-dono I never would have figured that you were one to loose your cool. The chapter is a turning point for this arc and early one at that, since now we are 100% sure that the antagonists are Quincy - all that Arrancar/Quincy, who is it really business has been cleared and for that I would say well done Kubo-sensei for giving the story a little bit more flavour.

I was expecting that the Quincy general would end up wiping out Haribel's Fraccione otherwise the story would just not fit. Sure they're not the strongest and seeing as Ichigo has defeated the likes of Ulquiora, Grimmjow and of course Aizen I'm assuming that this chapter was just another stepping stone to set the arc in full motion and to introduce stronger characters.

With the Gotei 13 captains on the move we might even see some more bankai's even if in an interview Kubo-sensei did say that it's unlikely for a few characters.

The whole surpassing Nizuma Eiji in tankobon sales was a little disappointing - just a complete anti-climax, to some extent anyway. Had it not been for the panels showing what all of the other mangaka in Jump have started doing after reading Ashirogi Muto's final chapter of Reversi was a nice touch and it was perhaps the chapters saving grace from the anti-climactic handling of the surpassing of the tankobon sales.

Besides the seeing the other mangaka's post-Reversi actions, I found it quite nice to see Kaya being acknowledged by Moritaka seeing as she was not only an important character but almost acknowledging the fact that she was sometimes an underrated character who might have forgotten about. This also added a little bit more towards the progression of the story into the final chapters of Bakuman.

I was surprised that the chapter even managed to even end on a pseudo-cliffhanger but I guess that's a display Ohba-sensei's skills shining through. Just like the last chapter I'm getting sadder and sadder yet awaiting the ending of the series with great anticipation.

So.... has Komi Naoshi-sensei been reading up on a few series because I could distinctly remember a few of the same scenarios occurring in other manga and anime. Of course it would be Maiko to suggest a bet to reveal the truth about the group's first loves through a game of old maid (a bit of a Yankee-kun to Megane-chan reference maybe ). That development lead to a series of hilarious facial expressions from the group but best of all from Onodera, which also happened to excite Raku a little bit.

And to finish off the chapter we have an appearance from Claude, with whose actions Raku ends up in a Mayo Chiki like situation with Chitoge (at this point Chitoge and Subaru from Mayo Chiki look almost identical).

So next chapter I'm assuming were going to see another comedy situation involving Raku hiding and getting himself into more sticky situations with Chitoge. 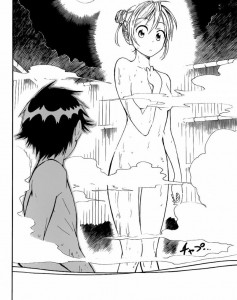 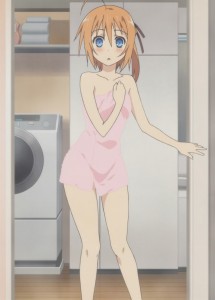 They could be twins or at least sisters[/caption] 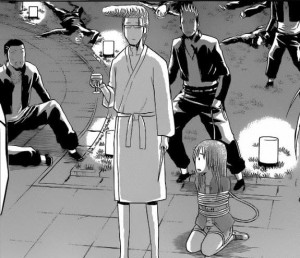 No fight but a nice chapter either way. I like how things got heated rather quickly between Toujo and Aiba, each one of them leaving a mark on the other and leaving so much more to be explored in the next chapters. The rest of the chapter has just been a repeat of the last 2-3 chapters and ends with Futaba being kidnapped (a little bit of deja vu here) but the chapter ends on a high note with the first fight appearance of Himekawa.

It's good to see that Himekawa is about to get some panel time but a part of me thinks that there could have been more creativity in creating an opening for his appearance. But with Himekawa, who is incidentally my favourite character in terms of comedy value (something you would understand if you saw a filler episode of the anime) I'm looking forward to see what new strength he has acquired.

I want to say One Piece but then again it's chapter wasn't particularly exciting as some of the others have been; the moment when Trafalgar Law is revealed (properly) to be a Shichibukai or his fight against Smoker. With that in mind I'm going to go ahead and say Nisekoi was the best chapter in this issue and One Piece was a close second.

Naruto was the only that was disappointing, the rest were fine but could have been better.