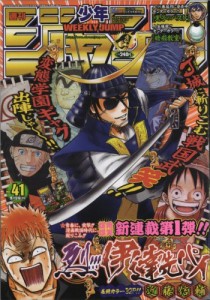 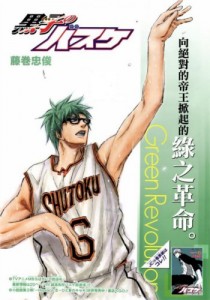 This issue of Weekly Shonen Jump marks the end of Sensei no Bulge and the start of Retsu!! Date-senpai. For colour pages we Kuroko no Basket and Assassination Classroom. Also with this issue, Naruto has passed the 600 chapter milestone.

Pretty good set of chapters this time round, but it seems like the Big 3 were a little slow-paced and mixed in quality. Beelzebub continues the hilarity and Kuroko manages to recover. 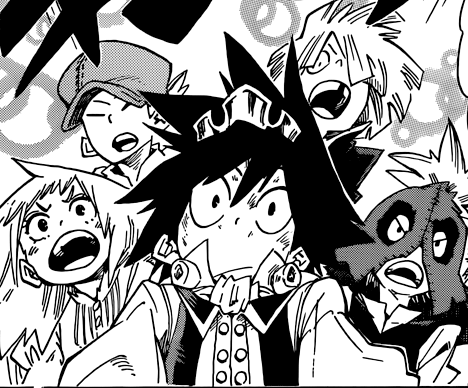 Well it is a pity that Sensei no Bulge has come to its end but that's how it goes in Weekly Shonen Jump. The chapter did it's best to wrap up all the loose ends in the story and at the end of the chapter I wasn't really sad that this series had met its end.

Aside from the average contents of the chapter, the part which I liked most and coincidentally which made most sense was Astro's refusal to tell the King about his secret. It definitely doesn't fit his character to mess up someone's idea of family (as we have heard countless times over the 16 chapters of) but it also showed his more mature side. He's been yearning for family for all of his life but he realised that it doesn't have to be biological to make it real.

Funnily enough there wasn't much else in the chapter to give a feeling of finality to the series. It almost felt like an arc conclusion, which of course can be attributed to the rushed ending but it's also the fault of Horikoshi-sensei. Overall the series had a lot of potential but it's inability to execute the story well enough lead it to it's demise in a matter of 16 weeks.

Here's hoping that Horikoshi-sensei's third and final attempt is a success!

After my initial disdain for this match, I've got to say KuroBas has managed to turn it around.

There was a lot of good in this chapter. In fact there was enough to get me to start appreciating this match more than I have since Akashi revealed his Emperor Eye.

Takao definitely had a lot to do with that. Even as one of the more "main" characters in the KuroBas universe, he's still one who gets ignored more than say Kasamatsu from Kaijo. Not only that, but the two times he's gone up against Seirin he was owned by Kuroko, so seeing him as a key player in the Shutoku was definitely a much-needed and appreciated change. He still wasn't made to change completely (getting rid of his gag-like personality would be too much) but he displayed enough change to make sit up and take notice.

The comparison of Kagami and Kuroko to Midorima and Takao was also a nice touch. With yet another flashback this chapter (I believe that's the 3rd or 4th one), this comparison ended up making the flashback quite likeable. Of course yet another reminder of how Akashi plays only for himself and how Midorima has changed wasn't necessary but I think that has more to do with Akashi being the only one left who hasn't been defeated.

I thought that the arc would conclude with this chapter but I'm glad I was wrong. Now that we get to see Akashi sweat a little more, it makes watching Midorima and Takao's cooperation play that much more enjoyable. It doesn't matter if it's ridiculous because it's not the focal point of the chapter. 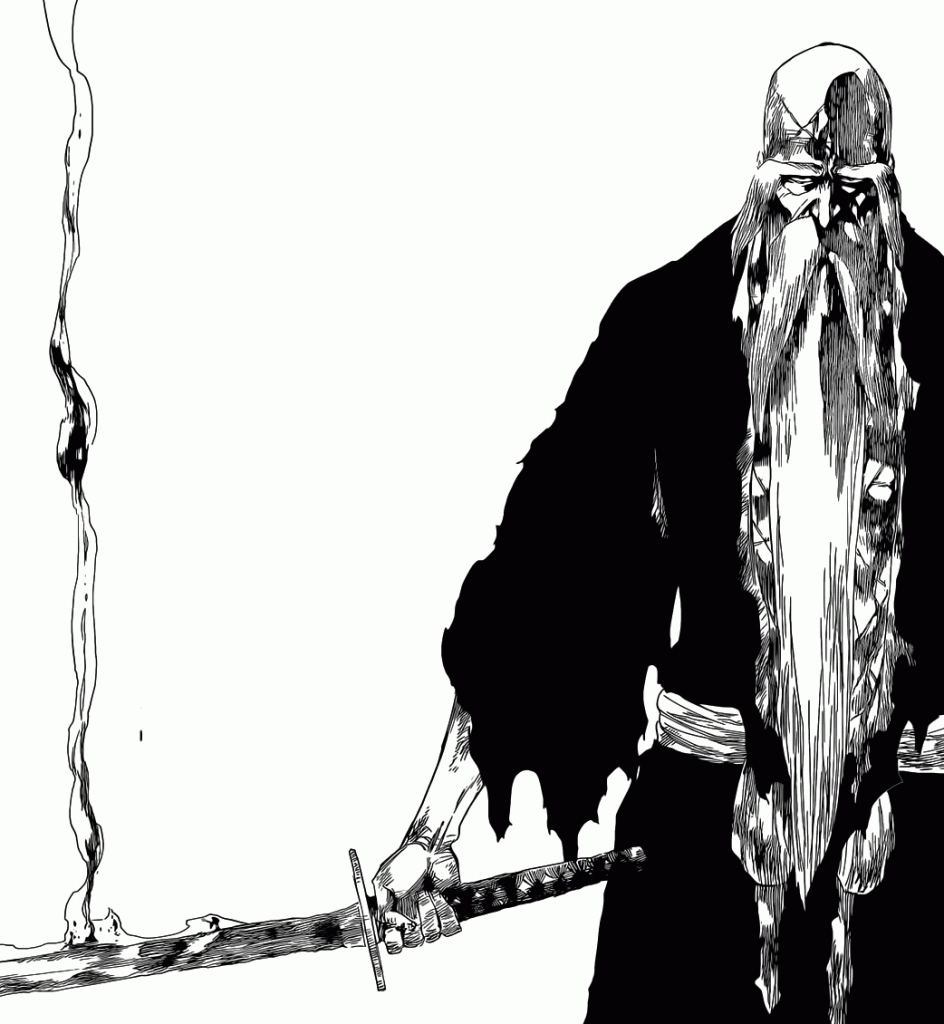 The third Yamamoto-centric chapter is just as good as the others but yet again it feels too short to be considered eventful.

I wasn't expecting anything less from him when he took down 3 Stern Ritter at once and of course his continued rampage has been fun to read thus far. More than anything, these past few chapter that have centred solely around Yamamoto have been great because they've been giving us insight into a character we heard a lot about but rarely saw in action.

Now I doubt there is anyone who will doubt Yamamoto's influence on his Captains, the rest of Soul Society and his almost paternal like instincts. As far as I'm concerned, this chapter didn't need a cherry on top but it didn't hurt to have one. Without a doubt, Yamamoto's bankai was one of the few remaining things I wanted to see before Bleach came to an end, and now is the time to have it unveiled.

Just that last double spread (pictured above) with him standing calmly after releasing his bankai is enough to make this chapter great. Even the Quincy King was left quaking in his boots, so it only makes the wait for the next chapter that much more unbearable, also I'm wondering if Yamamoto will actually lose Logic dictates he has to so that Ichigo can save the day but I can't imagine the Quincy King winning with that much ease. Even if he did defeat Kenpachi, Yamamoto is in a league of his own.

Great chapter from Bleach. We can expect more interesting developments to come and hopefully not much more Yamamoto; sounds crazy but we can't have him hog the spotlight for too long.

Well that was boring! For most of the chapter. At least the ending left something to be pondered.

It's a well known fact that Naruto is the biggest offender when it comes to using multiple flahbacks. We're not talking about flashbacks with new information but instead a rehash of old panels which have been greyed out a little. If you were keeping count, there were 7 pages in the chapter which were just that.

Before the flashback a fear of mine regarding the plot direction was realised; Obito's reason for doing this was because of Rin......... Honestly I couldn't think of a weaker reason to explain why the shinobi are in the midst of a 4th World War. It feels like the stupidest reason in existence to use to explain the emergence of one of the biggest events in the series.

At least the chapter ended on a higher note, with some action and the reappearance of Madara. Madara's appearance brought about a few questions, the first one being: how does he know Obito He was presumed dead for a while when Obito was alive, so I'm guessing he has something to do with Obito surviving.

Then I couldn't help but think if the 5 Kages have been defeated by Madara or if he just left them be. Last I remember, he was doing something to escape the control of Edo Tensei but that was left abruptly. It's possible yet undesirable that Madara's appearance also signals the final stage of the battles and this could very well be the last battle before the most decisive one of them all: Naruto vs Sasuke.

Not impressed with this chapter but the end left me pondering a few things. 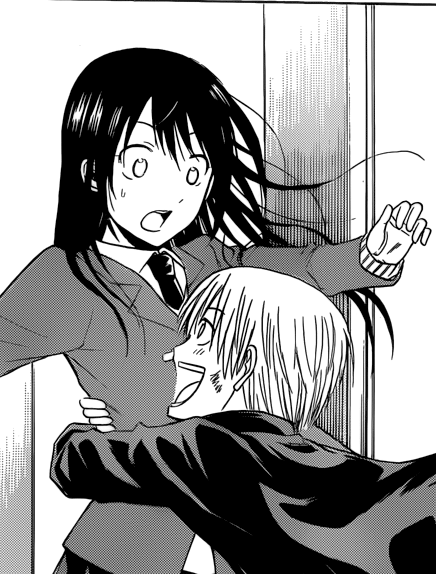 My love for this arc is undying and I don't see it slowing down.

It doesn't make sense that I'd like this chapter. There's not much going on and quite frankly it's just more of the same but who cares when you get to keep seeing Furuichi kick ass and leave me in tears with all the comedy in each chapter.

In essence it's the ridiculousness of idea that Furuichi could be strong enough to take on the TKKH. Oga's reactions to Furuichi's actions also add a lot of comedy to the situation, making it impossible not to smile. Now that Furuichi's going to face off against Toujo, things should get more ridiculous and to make sure of that, including Jabberwock was just the right choice to get us there.

The panels of shocked faces left me intrigued to say the least. Is Oga actually scared of Furuichi now It's possible considering how much of a hard time he had against Jabberwock. Needless to say, next chapter should be a continuation of the humorous awesomeness that is this arc.

I have a bad feeling the arc isn't going to last much longer, so enjoy it while it lasts! 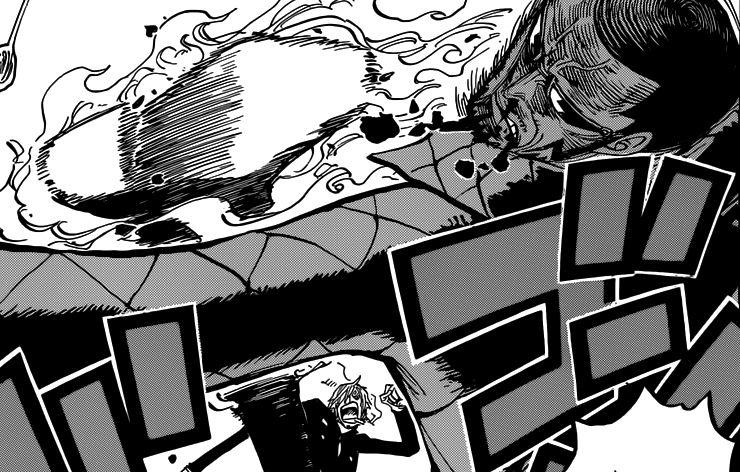 After all that running, Zoro & Co. refuse to do any more. Good for them!

That little addition to the chapter made for some nice humour that One Piece is good at doing but honestly the rest of the chapter felt a little slow at times. Vergo's appearance was intended to stir the pot but I was left unphased by it and not much changed when Sanji showed up to kick him in the face.

A little surprising that Sanji's facing Vergo since I'd assume he was Zoro's opponent. Putting aside the strength of these two, it's been the norm for Sanji to handle the #3 toughest and for Zoro to handle the #2 but I guess there is a reason it's Sanji and not Zoro. My guess is that Zoro will have a big role in the upcoming arc to do with the samurai, and thus he's being preserved for later use.

The arc doesn't feel as exciting any more. Maybe it's because it feel a little too long or it may also be because of Ceaser's initial escape, either way it's not doing it for me any more. At least the chapter ended with Luffy and Smoker getting to Ceaser's place, which will hopefully lead to a conclusion by the next chapter.

It feels like cheating choosing Beelzebub again, but it's continued to be my favourite. Kuroko no Basket was very enjoyable this time round also so it deserves to be tied for best chapter.

Surprise, surprise, Naruto is back to being bad. Kishimoto-sensei might as well admit to purposefully drawing out each chapter so that he can have more volumes to sell and possibly retire on.

Final Note: I might be adding Katekyo Hitman Reborn! to these issue reviews as soon as I'm caught up (give it a few more days, or a week tops).