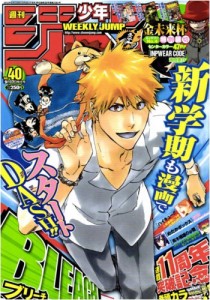 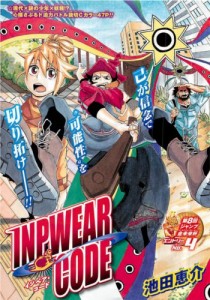 In this issue of Weekly Shonen Jump: Naruto finally reveals the identity of Tobi, Yamamoto becomes even more enraged in Bleach, Luffy & Co fight against time in One Piece and Furuichi continues to be awesome in Beelzebub. This issue also marks the end of this year's Golden Future Cup. All this and a few others in this Issue's review. 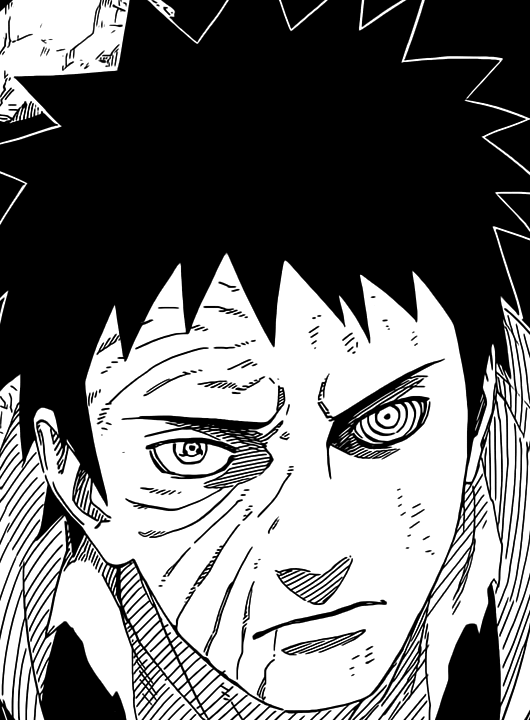 On the chapter before it's 600th, Kishimoto-sensei decided to read chapter 95 of Bakuman and just do what they discussed in that chapter.

For anyone who's unfamiliar with that happened in Bakuman, this chapter saw the "genius" mangaka (who's competing with out protagonists) put out a textless chapter. Pretty much the same thing we saw with this chapter, except I don't think this should deserve all that much praise.

I wouldn't say the chapter was bad. As a flashback sequence, it worked and was a nice change from all the wordy flashbacks we've seen from Naruto (which is a lot) but it just didn't do anything else for me. Since I've heard the Tobi is Obito theory beforehand, the revelation wasn't shocking and what's more the 14/15 textless chapters hinted towards this from the beginning. That said, I can definitely understand the shock value of this revelation after reading/watching the Kakashi gaiden chapters/episodes after which we assumed Obtio and Kakashi ended things on a touching note.

I've also got to question whether the presentation of the flashback was good enough. To me it looked like a petty tale of one guy's envy towards another guy, all for the sake of a single girl. This may be a tried and true plot device which isn't exclusive to manga or anime (western TV and Film also) but it seems very insignificant.

Hopefully the next chapter will properly explain Obito's rage towards Kakashi, Konoha and the Ninja World thoroughly. It seems a little crazy that I'm hoping for yet another set of flashback chapters, since we've had so many in recent times (all those Kabuto ones not too long ago) but leaving this as it is right now would be even more unsatisfying than taking the time to explain Obito's true background.

The turning point in the world war has arrived! Now it's time for everything to be put out into the open. 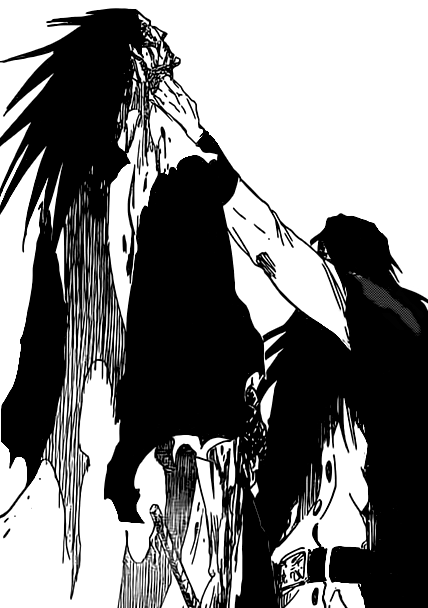 Yamamoto enraged is awesome...... that's my main thought for this chapter.

There's not much to say about this chapter of Bleach. The main focus of this chapter was Yamamoto, who we don't get to see in the spotlight all often and what's more we only see him overpower his opponents (not quite what happened this time).

Building upon the belief that he's the strongest shinigami and has been for the past millennium, this is the first time he's displayed true leadership skills. We know he's forceful and will make his subordinates carry out any order issued to him but now we see that the other captains don't just fear him, they respect him.

I quite liked how by just raising his reiatsu to ridiculous levels, all of the other shinigami felt a responsibility to keep fighting. The captains were the most affected by this; appropriate since they'll understand Yamamoto's power better than anybody else.

Then we get to the Quincy King (Yuhabaha) and Kenpachi.

When I saw Kenpachi defeated I almost let out a Yachiru--like "KEN-CHAN" scream. I don't like to see this beast losing but a part of me knew he couldn't win against the Quincy leader. If he did, then the whole arc would end! Besides Kenpachi's loss being expected, it serves as a nice set up for a fight between Yuhabaha and Yamamoto (those names are too similar!). I often forget that whilst Kenpachi is pretty high up on the Bleach food chain, he still can't do jack compared to Yamamoto.

The next few chapters should be nothings short of awesome. A fight between two of the strongest (at this moment in time) characters in Bleach should leave me in awe! 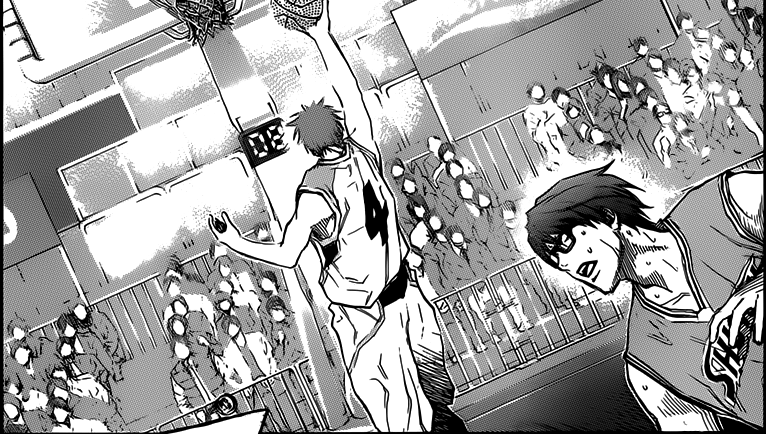 Akashi continues to be overwhelming but I keep getting fonder of Midorima.

With the way things are going, I can't imagine there being another opponent for Seirin to face other than Akashi and his Rakuzan team. The way he's been dominating is a little like Aomine in the first Seirin v Touo game, except that Akashi isn't even running but merely walking.

To make things even more like the first Seirin v Touo game, there was a reversal of roles; Kuroko observed as Midorima and his team refused to give up, much like Midorima witnessed Kuroko's undying will when Seirin lost. At the time I wouldn't have guessed that this was going to be a learning moment for Midorima, a proud member of the Generation of Miracles, but I'm glad it was. The formula the manga has followed is close to Eyeshield 21 in the sense that old enemies become friends and help each other out; this may make some people roll their eyes but I like the sportsmanship it portrays and promotes.

Even with Shutoku refusing to give up, it's hard to imagine them pulling off an upset. It wouldn't make sense for the strongest player in the KuroBas universe to loose, not to mention we have yet to see what the uncrowned generals have to offer. With Shutoku's loss being inevitable, I guess I'm interested to see how Midorima will handle the loss. Due to the history between him and Akashi, I can't imagine him handling it all that well but that might be more Akashi's fault than his.

A much better chapter this issue for Kuroko no Basket. With the Shutoku vs Rakuzan match winding down, all we'll have left will be Kaijou vs Seirin and then most probably Rakuzan vs Seirin (I'd maybe like to see Shutoku vs Kaijou). 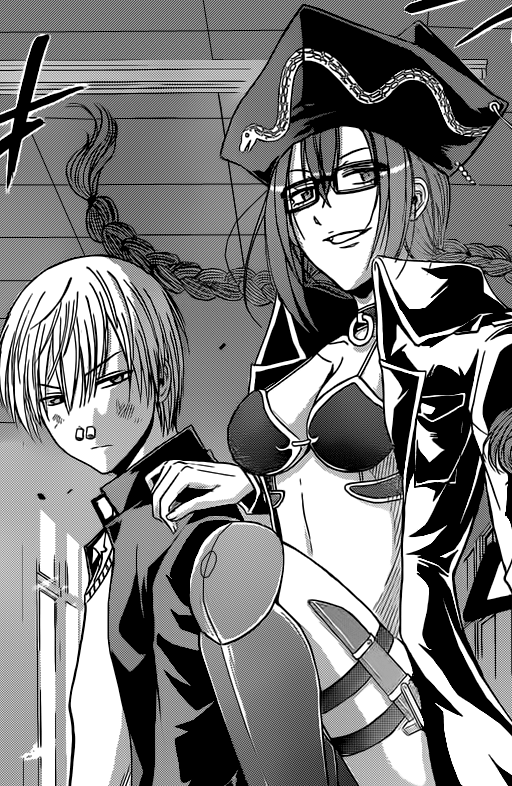 If you haven't read my thoughts on the previous chapter of Beelzebub, then I'll repeat myself a little: I really like this arc already. In fact I don't just like it, I love it.

More of Furuichi going around and kicking ass was definitely some good fun, but I didn't expect the Behemoth squad to get tied into this. In a way this made another filler arc into a side-story or actual part of the main plot, which hasn't been revisited for a while now.

Furuichi continues to be the driving force behind all the comedy and the arc itself but the addition of Behemoth's Pillar Squad should give the story a little more flavour in terms of comedy whilst providing us with some pretty decent action. The pinnacle of all this was the last page when Furuichi was teamed up with Agiel, at which point I swear his character design became a lot cooler (like a bad-ass Haruto from Kimi no Iru Machi).

I could tell last week but I'm sure this week that I'm going to have some fun with this arc. 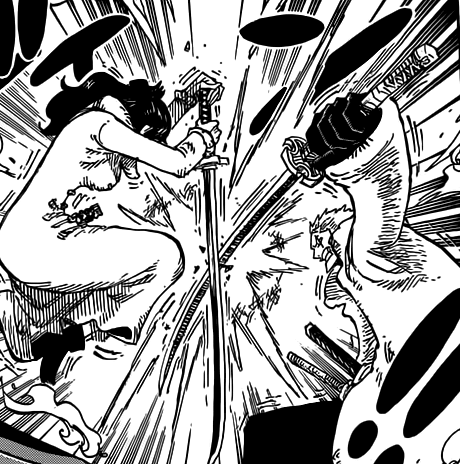 I'd sometimes wish just writing the word "meh" would be sufficient to sum up chapters of One Piece. There was just not that much going on.

I guess Oda tried to introduce some urgency to the situation but it was a little hard to take things seriously when the cast of One Piece is involved. Much like how Zoro pointed out that he and a few others have been running for a lot of this arc, I just couldn't see this as anything more than a joke turned into something more serious.

Tashigi and Zoro's clash was one of the more memorable, if not, the most memorable part of this chapter. Just like how Smoker and Luffy will eventually clash, these two also share a similar type of relationship. It still feels like Tashigi hasn't really developed much since she gives of the same feeling of naivete as she did back when she couldn't capture Sir Crocodile on her own; I might be harsh though, and this could also be seen as her sticking to her ideals.

Other than that, the chapter was pretty much like any other; not much happening but instead building up to something. 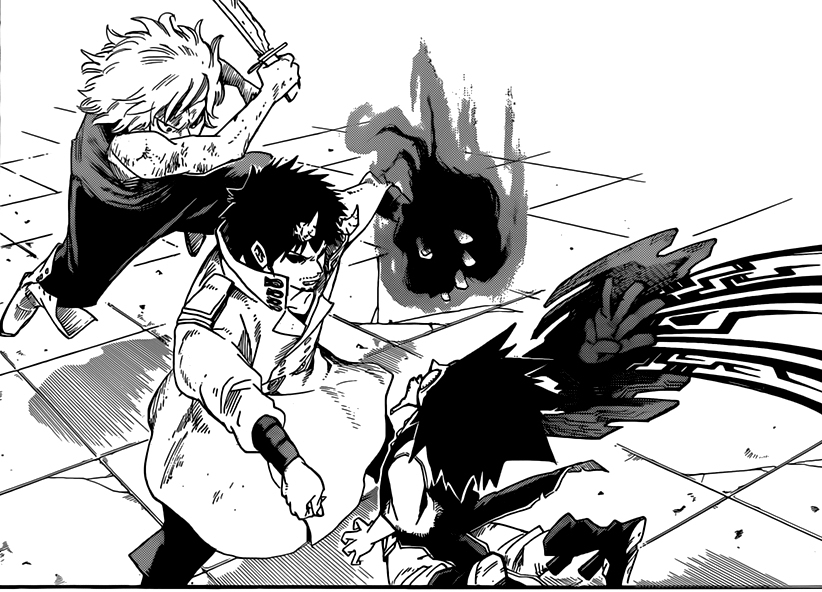 Bulge's rushed end isn't all bad. Not great, but not the worst rushed ending I've seen.

Yes the fight lasted for only one chapter and yes Astro brought up his love of family AGAIN but the fight itself was quite clean-cut. Don't get me wrong, it won't wow you because it's not that good however it worth checking out the illustrations.

Tico served a pretty good purpose in being there, even though I thought it was pointless she showed up in the last chapter; a pleasant surprise of sorts. Her being there also gave opportunity for someone other than Tiamat to show off and beat everyone (Tiamat actually did that this chapter as well but not as much as he could have).

Finally, as with all rushed endings the inevitable power up to defeat the boss happened. Not surprising and handled in true Weekly Shonen Jump fashion. Next issue is the conclusion and after that it's time to pick up another weekly manga series.

Bleach was very good in that we got to see more of Yamamoto being a boss but I still enjoyed Beelzebub more. I know there wasn't anything new this chapter (well.....extraordinarily new) but it still provided me with tonnes of laughs.

It's sad whenever the One Piece chapter disappoints but that's how it goes sometimes. Naruto's wasn't brilliant either but that was mostly due to the artistic choice by Kishimoto-sensei as opposed to Oda-sensei's choice to progress the story too slowly.

Note: Both Cross Manage and Retsu!! Date-senpai ran as one-shots in Weekly Shonen Jump earlier this year (Retsu! in Issue #10 and Cross Manage in Issue #20). Cross Manage's one-shot has been scanlated and the same group is considering picking up the series. The same cannot be said for Retsu!!