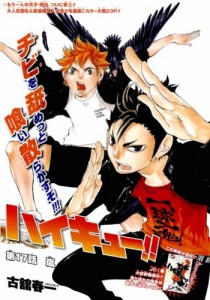 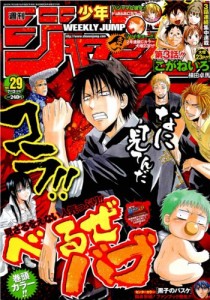 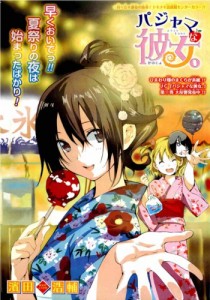 Later than I would have wanted to write this but quite a few chapters have been scanlated later than usual, I finished finals and had to fly out. A lot going on in this issue of Weekly Shonen Jump starting with another beautiful colour page from Pajama na Kanojo, Haikyuu!! with a second colour in a row alongside Kuroko no Basket and Beelzebub on the cover to commemorate a new arc and 160 chapters. A really good set of chapters this time round with plenty to offer from One Piece, Bleach and Sensei no Bulge.

So here's the verdict on the chapters: 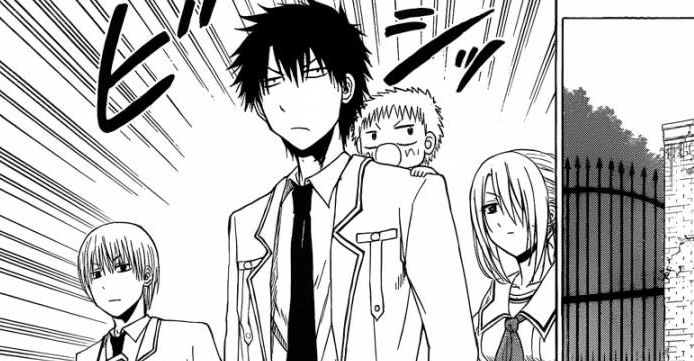 Leading off this week's set of chapters was a seemingly unrelated and episodic one from Beelzebub.

The chapter contained plenty of the usual comedic value, this time the source being the great Demon King himself and a certain video of his groin but what did make the plot a little bit more interesting is that this was the first involvement from the King and could possibly be a more serious plot development for the story as a whole; my money's against it but what the hey.

I was glad to see Himekawa get a main role for this arc, seeing as his character has been a little neglected recently and even Kanzaki has been getting a lot more appearances. As a side note, it has never really crossed my mind whether Himekawa was really a delinquent beforehand and why someone so rich is a delinquent but I am glad to see the story exploring these lesser but still interestingly amusing plot points. Although this setting feels all to "St. Ishiyama", it does leave a lot to the imagination and makes me interested as to what it is the Demon King desires which is currently in the richest school in the country.

The end of the chapter introduces a probable antagonist of this arc but not before allowing Himekawa to get a little revenge on Oga by making him his underling in the rich school and thus ending a satisfying chapter of Beelzebub with a slight cliffhanger. 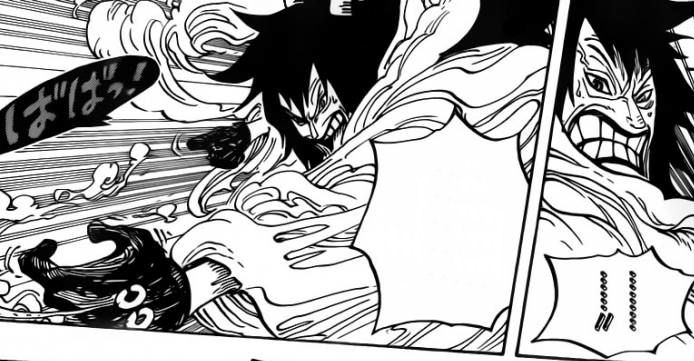 Quite the chapter from One Piece.

Now that Ceaser and Luffy have finally met each other, a fight was inevitable. Withholding the truth that it was fun to see Luffy mess around and make Ceaser look like a fool not worthy of 300 million belli bounty, I was glad to see the chapter stabilize and take time to cool down the fighting but more importantly, not allow for the main antagonist of this arc to be killed off so easily - the most appropriate phrase used by Ceaser during the fight was "Don't compare me to that Paramecia."

Appropriately after saying this statement, Luffy finally yields and rightfully so because even with Haki he still isn't 100% invincible againts Logia type users and of course there is also the observation that Ceaser is in fact much more intelligent than Luffy (being a scientist and all), so he wouldn't have been purposefully beaten up like that just because he's not very strong.

Finally, the big cliffhanger of this chapter and the biggest one out of all the series was the last 2 pages with Trafalgar Law falling to his knees after being lead somewhere by Monet and after the appearance of a mystery man. The identity of the mystery man is a little hard to guess: for one, because it's someone who knows Law from a while ago, it becomes even harder to guess to a point accurate enough but also because there are so many characters in the One Piece world and a number of them can make an appearance here. I personally think that based on the parts of his outfit shown and how he would fit into all of this, the man is former Admiral Kuzan (Aokiji).

Even with such a great chapter, an absence next week makes me a little pissed off. 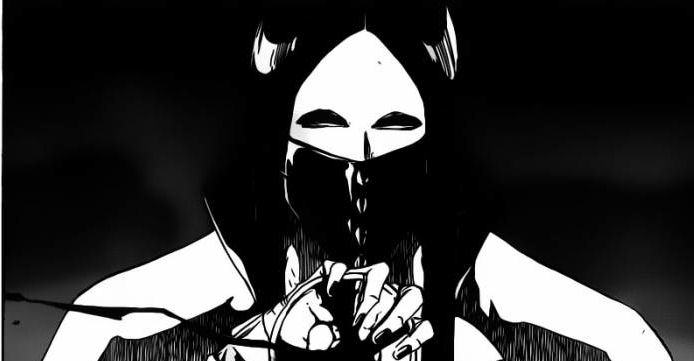 I've always admired Kubo-sensei's ability to create chapters that take close to 5-10 seconds to read in their entirety (some at least), but something tells me that it's a little wasted on a chapter like this, for which the biggest role to play was further set the plot of the final battle arc of the series' last arc.

The biggest development here was that the Stern Ritter ended up stealing 4 Captains' bankais, leaving them stupefied and just sitting there in silent shock. This look is a rarity for Byakuya (the most composed of the lot) but I did notice that including him and possibly excluding Soi Fon, all of the bankais that were sealed were ones which we had seed previously on numerous occasions.

Whether the sealing of over-displayed bankai is a hint that we're going to be exposed to more bankai or that the Captains might take a break from the fighting now and allow their Lieutenants to take over. I don't know which one is more likely but I will say that Kenpachi is going to do great against these guys.

Too short a chapter with not much happening but not a terrible display. 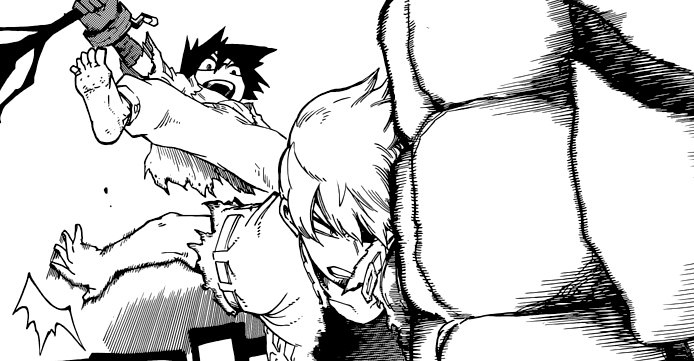 Chapter 5 and very little to talk about really.

What I've gathered is that by now you either love or hate this manga and accept it for all of it's clich s or you just drop it and move on; for me it's the former. Now that Astro and Tiamat have teamed, we get to see some decent action (mostly from Tiamat) but it does leave me wondering if Astro is being thrown into too many fights, and whether the training will take place sooner or later,

Astro being thrown into fighting didn't really serve much purpose in this episode and in fact felt kind of pointless, since he is a character who still needs to train a lot at this point in the story, but has instead barely defeated his enemies and in this chapter he is unable to even injure his enemy, forcing Tiamat to step in. Another plot point which I didn't get was this one. What purpose did it have We already know that Tiamat has come to accept Astro, so is this scene really that necessary and what's worse, why is it a cliffhanger ending

Not a chapter to my liking but still not bad. 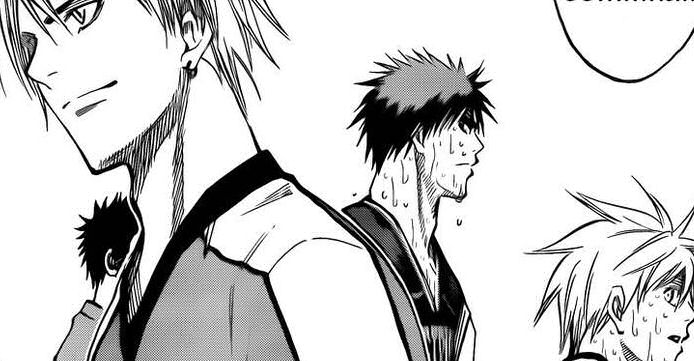 The Yousen arc ended in a rather anti-climactic way and this chapter served as the wind-down chapter of the arc, whilst setting up for the new arc. The chapter had a lot going on, adding more to the chapter than what could have been included.

There was a lot of emotion revolving around Murasakibara and Tatsuya but in the end it was Kagami and Kuroko's talk regarding the bond that is shared between Kagami and Tatsuya that really made the chapter. It was this moment which was most enjoyable to me since I've always understood the strength of rivalry and I always appreciate when there is a decent conclusion to a heater match between rivals.

The highlight of the chapter was of course the introduction of a new character called Haizaki Shougo, the former 5th player before Kise replaced him. With his introduction it seems more and more likely that the series will take the Eyeshield 21 approach and fully end the tournament, so the introduction of the new player wasn't really shocking since I wasn't expecting another Kagami v Kise arc but also the introduction of Haizaki made a lot of logical sense.

Kuroko has now got to the last few arcs of the Interhigh, presumably with the next one being the penultimate. I just hope that the upcoming arc is better paced and concluded than the one that just ended. 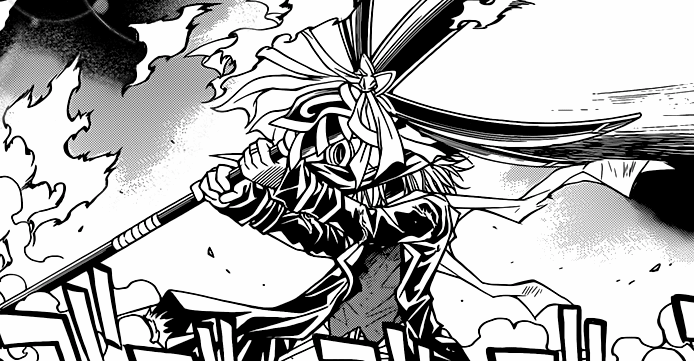 As the story moves towards completion, this chapter proves to be far better than the last few.

Other than my issue with Shion already possessing strength comparable to Oz, the magician of the beginning, it was definitely the better choice to not focus on the multitude of other characters that were introduced in chapter 62 and instead focus on a straight up fight between Shion and Oz.

A little surprising to have Oz reveal that he and Echidna are also a married couple attempting to complete magico, thus giving the story a new addition that's a little bit more original than the plot developments up until now.

The fighting aside, the other focus of this chapter was to reclaim Anise as part of the family, not the most exciting plot point of the chapter mind you but it feels like all loose ends have been tied and now the manga is on the verge of involuntary completion. 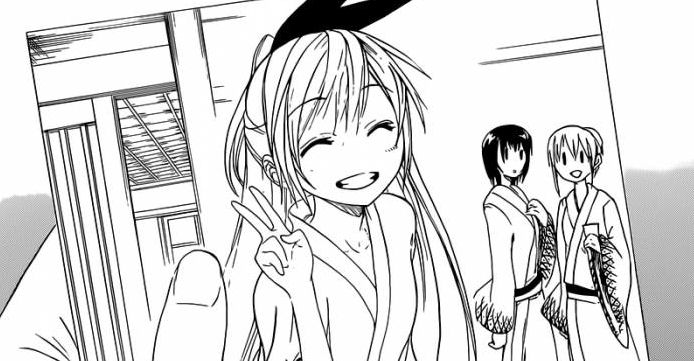 After so many developments happening, I was somewhat glad to see Nisekoi to slow down again with the actual plot and to focus on the participants of the love triangle.

For me this chapter was definitely an Onodera-centric one, with most of the focus being on her confusion and inability to be carry out her plans to try and win over Raku. It was a little sad and emotional, leaving me feeling a little bit sorry for Onodera since she's been made into such a fragile character but at least seeing her in a few comedic panels alongside Raku (courtesy of Ruri) did lighten the mood a little.

Besides the Onodera focus and the bits of Chitoge's awkwardness we saw at the beginning of the chapter, this ended up as being another pseudo-transitional chapter for Nisekoi, filled to the rim with comedy arising from a stereotypical romcom situation; in this case that would be all the photos. With the stage set in the previous 3 chapters, the chapter did a decent enough job allowing for the flow of the story to slow down a little but remain unchanged as it progresses with the quest for the girl with the correct key for the locket.

A lot less impact and enjoyment from this chapter than the previous few but still not bad by any means.