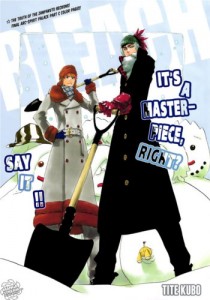 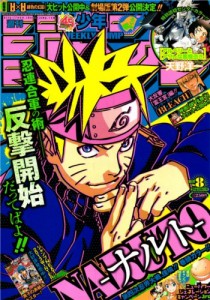 After a long break, Weekly Shonen Jump is finally back. A strong issue for sure. Great chapters from quite a few series - no surprises as to which ones. There's also some good news regarding a series from Weekly Shonen Jump.

Let's kick off the review, with one of the good chapters.

I swear that whenever Unohana and Kenpachi are mentioned in the same chapter, you forget about everything else. Case in point: I pretty much forgot about what happened to Ichigo and Renji. Not that what they're going through is boring, it just doesn't compare to the ultimate showdown.

This chapter left me feeling odd, because of the development involving Unohana. Whilst I love any chapter that involves Kenpachi, the fact that one of them has to die is a little strange. We only now know about Unohana's past and her "true" personality, and already we have to say goodbye to her. Nothing may be set in stone, but that seems all but guaranteed. I guess you'd call it a sort of sadness that we're saying goodbye to yet another character, even if we don't know much about her.

As I mentioned, Ichigo and Renji's half of the chapter becomes but a blip on the radar. Personally, I like this because it takes away from the very stereotypical shonen training scene, which Bleach has done before. In fact, this whole rehab arc has been far from the generic training arc because there are more things going on. In the end, it was so a Kenpachi chapter. His evolution should bring about one of the (potentially) most awesome shonen power-up's I've ever seen. 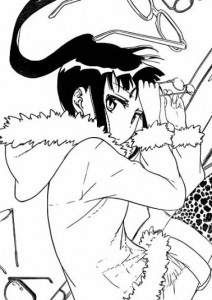 Apologies for the joke, but you have to understand how happy I was to see this chapter. For me Ruri is always a character with a presence - not counting the harem. That still doesn't mean she shouldn't have her own chapter! Komi-sensei did good with this one.

As one might expect, there was a lot of that trademark Ruri teasing going on in this chapter. She still pushes Onodera's buttons like no other character or scenario in Nisekoi and I absolutely adore her for that. With that going on, I was happy to see something more in this chapter relating to her.

How about that Shuu x Ruri scene

This is a side ship that many won't care about. I myself don't love it as much Onodera x Raku, but I still like that it was brought up. Their relationship is all banter and Shuu getting injured at her hands, and yet they're in similar positions. Being the glasses best friend of a blockhead isn't easy.

Since a few chapters back, we've learnt Shuu is a smart character. His act as the fool is always entertaining, never boring. That said, him showing a more serious side and helping Ruri see the error of her direct meddling was a defining moment for the both of them. It was then that Nisekoi fans said/wrote/shouted the word SHIP.

The best part about this Naruto chapter: the JoJo's Bizarre Adventure inspired cover.

I'm a huge fan of JoJo's art, and the coloured pop art style is just a visual delight. If this is because of the anime, then I'm even happier. Just good to see more of JoJo's influence on the magazine. Oh right, I'm meant to be talking about this chapter.

Still very average. It feels like Naruto is resting on the generic as it continues to involve all the other characters of the series. Before I was annoyed at the continuous cycle of Naruto coming to the rescue after his friends fail to accomplish what he will. Now I'd rather go back to that, because it at least provided more excitement than this current arc.

Not sure if it's the involvement of the other characters or my desire for the end of this arc. Yet another sub-par chapter from the series. 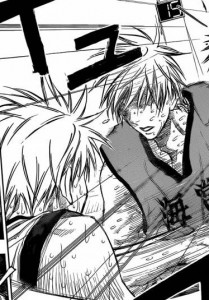 I'm a little surprised that the match hasn't concluded. Not a negative observation, just feels unnecessary if you ask me.

Seeing as how we're expecting Seirin to win, their road to victory has become more complicated than it should be. Sure I understand that this is for the sake of Kise giving his, like a fighter in his last stand. Nevertheless, the impact the initial chapters had has now worn off.

For me, all that's left is to wait. Kise's become the perfect penultimate rival to take down. He keeps surprising everyone with his increasing powers and eventually he could reach a state close to the zone. I'm just not feeling the excitement or an impending conclusion coming on. A pity, considering how well done the all-colour previous chapter was.

It's really down to the final stretch of the showdown. I'm ready for a conclusion so that we can move onto the final boss: Akashi and Rakuzan. Seirin vs Kaijou has started to drag on a little too long for my taste. Hopefully we'll get a move in a more conclusive direction, or an actual conclusion, next chapter. 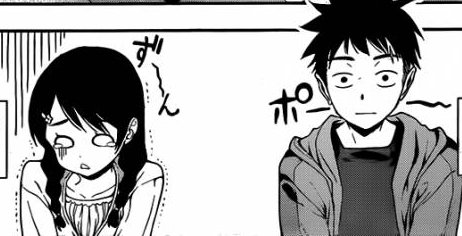 I'm truly happy that SnS finds itself towards the top of the ToC. Nothing official yet, but for the time being this series is safe. That means more cooking comedy to bring us joy and laughter!

After deciding not to over-analyse my liking of the series, it dawned on me why I hold it in high regard. It's the comedy! SnS may not be intended as a comedy, but it sure makes me laugh more than Kiruko-san which is meant to be a comedy. Nothing against Kiruko-san - it does have its moments - but this series is just better.

In a continued effort to keep things as Weekly Shonen Jump as possible, we get a development in the plot. The ten elites - AKA a number of adversaries to be defeated. Nothing says Weekly Shonen Jump as set of characters our protagonist has to take down, and for this series it works. Certainly the series lends itself out to this type of plot, and most importantly, it's having fun with it.

Looks like Erina isn't at the top. It only makes sense that the first school mate Souma enticed wasn't the best. His nudist senpai, Isshiki Satoshi, on the other hand could be more dangerous. I for one am looking forward to the craziness of the cooking challenge and the inevitable orgasm. While all this is happening, Megumi remains an adorable character. She's still the pushover/dazed character you want around. More-so because Souma causes her so much grief. 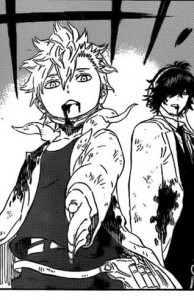 Right now I'm about ready to throw in the towel with HJ. It's gone from early D.Gray-man to slightly better than any average series to run in Weekly Shonen Jump. Unlike Souma. this series has lost its flair, little by little, after the first four to five chapters. Now it's less of a joy to read......

At least the fight concluded in this chapter. Not the best choice for the second arc of the series; a little sloppy and lazy. Even the conclusion of the fight didn't sit well with me. Almost too textbook/cheesy, the poses and dialogue just made cringe.

I fear the series is making rash decisions based on a not-so-great performance on the rankings. It's unfortunate, since the series started off strong but wasn't well received in Japan. Not the first time a series has rushed because of its unimpressive performance at the start.

The next arc may bring about more rushed battles. If the ending of this chapter is any indication, we're in for more ill-planned action. Unfortunately, that's how it goes sometimes. 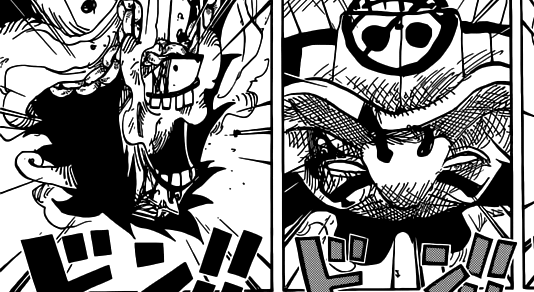 Finally we're come to the end of the Punk Hazard arc! This chapter essentially finishes off what the previous one started. Not before we get some more questions to be answered.

After more of Franky's domination, it was amusing to see Usopp and Nami finish off Caesar. A little anti-climactic in the loosest sense, although I was just happy to see an end to this arc. At the very least, Nami and Usopp ended the arc having accomplished something other than keeping the children sane.

Now comes the next part!

Different groups are moving. Doflamingo is en route to retrieve Caesar and of course there's the mysterious man at the end. My money is on Mihawk, just because of the silhouette though I do think it's too son. Whoever the person is, it's great to see One Piece heading onto the next arc with a big bang. 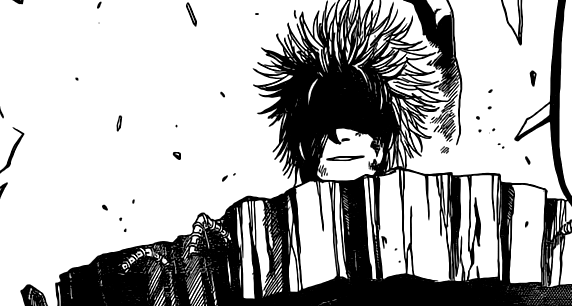 For the most part, I enjoyed the recent comedy arcs. They were good; a little long but there was some great comedy. Regardless, I'd be lying if I said I haven't been waiting for the return of the action. And now it's back! With some new characters to boot.

With the precursor that was the previous chapter, this chapter throws us right back into familiar waters. Oga's situation is reversed and now he's the one defending the title of strongest. It won't be all one-hit K.O's for him, as proven by the new challenger that managed to tag his hand.

Lot's of fun ahead of us!

Just for sheer excitement and entertainment, Bleach came out on top. There's a lot going on and it's being handled very well. One Piece had a better conclusion than a start this week, meaning it missed out on being the best.

I'm about ready to put Naruto on indefinite hold. Until it gets to the final fight, I don't see the series improving. Hungry Joker also took a large dive in quality with the fight's conclusion.

[Author's Note] Haikyuu!! and Nisekoi continue to be grouped together. More additions to their colour page counts.

The nominees for the Manga Taisho Award have been announced. [Source]

Amongst the list of nominees, Ansatsu Kyoushitsu has made the short list. Adding more success to Yusei Matsui's already monster hit, the series is bound to get more recognition.

It's competition is steep - Otoyomegatari (last year's runner-up) is nominated again, but we can hope. Results should be out in March, so until then!