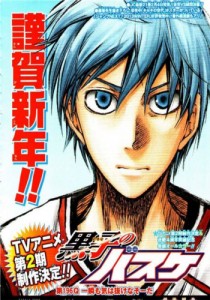 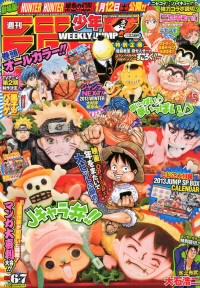 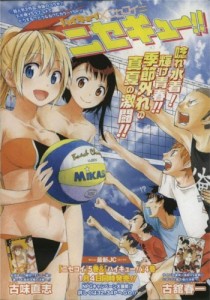 This review may be late by a week or so, but I'm sure you guys can understand the holidays have been busy. This issue of Weekly Shonen Jump marks a special occasion with the all colour chapter of Kuroko no Basket as well as the Nisekoi x Haikyuu!! crossover called Nisekyuu!!

A lot of chapters up for review, so let's get to it:

It's no secret that I had nothing but high praise for Hungry Joker's first four chapters. I thought for a new series to go at a quickened pace and to introduce the main antagonist early on was a great idea and gave the series a lot of possibilities for the future. Now I've begun to lose my interest and praise for the series.

I don't know if this is the best way to describe it, but it seems to me that HJ is either loosing its sparkle or it has already been burnt out. The recent chapters, chapter 8 included don't seem nearly as interesting as the lead up to the White Joker arc of the story.

Partly because there is another fight, it doesn't feel like the series' most interesting arc. A lot of this has to do with this arc's fight following a very intense showdown from the first 3 chapters and not living up to it. The fight could have been delayed, allowing for more build-up but instead it feel flat upon delivery. Even a chapter like this was sub-par and with the added nuisance of a new gag character trait for Alan, it wasn't good.

Hungry Joker won't survive much longer at this rate. 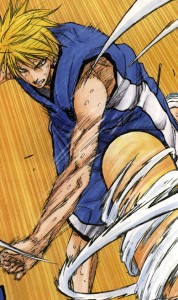 First off, one needs to appreciate the rarity of getting a chapter with all colour pages. To my knowledge, this has only happened once before and that was for a big moment in Weekly Shonen Jump's history - Bleach chapter 162 when Ichigo activated his bankai. With this, KuroBas stepped up its game once again.

The series has really picked up the intensity for this chapter. After a drought of Seirin dominating, Kise's return really brought up the intensity of the story. Hitting the ground running, Kise's continuous growth on the court led to a levelling of the playing field between Seirin and Kaijou. Now it really is a close game which could end up with another showdown in the zone - doubt it, considering it's already been used twice and only a few minutes remain.

In many ways, this chapter had a lot to live up to. Any one who finds out that the last time an all colour chapter was given was for Bleach's bankai chapter, will expect a lot from any other series. No matter if you read it or not, curiosity will prevail for most and people will check out the chapter.

All in all, KuroBas did a pretty good job. Now the final moments of this match can be resolved in the next 1-2 chapters and this chapter itself brought up the intensity just in time for the climax.

Giving Naruto shit has become such a regular act that I'm questioning whether the manga was ever as good as I remember it. This latest addition to the "I can put out shit and it'll be popular" pile of chapters that Kishimoto-sensei has churned out for the better part of 2012, really make it hard to stay positive.

I had a big issue with the way Neji's death was handled last chapter. Now I have a problem with this chapter entering the most generic route, with even more generic, dialogue in shonen action manga. It's almost astounding how bad the dialogue and the writing was this chapter.

Had I not been following this series for years, I would have dropped it by now. 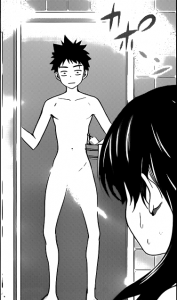 In trying to figure out why I actually like this ecchi cooking manga, I stumbled upon some kind of vague explanation. You see, Shougeki no Souma is like an avocado: you have no idea what it tastes like but you know you like it.

Some may go as far as to classify this as a guilty pleasure type of series. I'm not one of those people but I'm more than willing to admit the difficulties I had in figuring out my unusual attachment to this series. On another note, this chapter is more of the same.

Perhaps it's the simplicity and my liking of the main character that make this series work. This chapter is yet another one with a character being introduced and seduced by Souma's cooking - the ongoing style of the manga. After five chapter of the same, you'd think there was no reason to continue yet I persist in reading this manga!

It's not the best, it's not the worst, it might be the most enjoyable. The three new series are all of higher (than the average) quality, making it harder to see one of them go. Unfortunately Souma may not last in the long run, but it might outlast the other two newbies.

My love for Trafalgar Law always goes up when I need it to. More oceans, more problems for Luffy & Co. as the conclusion of the Punk Hazard arc also brings about new developments.

Let's go back to Law for a second. The cunning fox he is managed to pull off a win situation for himself and the Straw Hat's whilst simultaneously taking out one of his enemies. With this Law really has shown his darker side. A side no one really knows about yet.

Throughout the arc he'd been made a fool of and he's been beaten down by one or two people, but he still came out on top. His secrecy about his powers and capabilities are giving an impression of some major and possibly ominous developments for Luffy in the future - we still don't know what Law did when he operated on Luffy.

Law's coming up as a big character for the series, and what better time! By the looks of it we're being thrown into more excitement with the upcoming arrival of Doflamingo. My only question: how can he fly We know it's not his devil fruit.

Since I last spoke of Kiruko-san, I've grown more fond of it. This may or may not have to do with the arrival of a brand new character.

Without so much as a second thought, I've got my new and only favourite character of the series: Chiaki. I just love her over-the-top expressions and reactions to the smallest things, because for me she adds comedy whenever she interacts with both Kiruko and Haruki.

Improvement is present in the case of this manga. It may not have started off strong but it has improved considerably since its first chapters. By doing things like introducing new characters, the series has changed the dynamic of the comedy to fit my tastes, however how it will continue to be funny is the real challenge. After all these chapters, I feel more confident in this manga's potential to keep funny.

That would be my reaction if I met a guy who made all those female zanpakuto. Then again, I am on the normal and not crazy side of the spectrum.

With that joke out of the way, I have nothing insightful to say about this chapter. Every once in a while Kubo-sensei decides to progress the story without accomplishing much with the chapter. Chapters like this are patient zero in the ongoing struggle which curious otaku face everyday! Damn you Kubo......

If there's one thing I've noticed, it's the overall change in tone. The past few chapters put aside a few panels just to make jokes and have fun in a conclusively serious situation. In the same arc we've had big revelations and some stupid humour on the side.

Presumably the bulk of the next chapter should give us a good idea of what'll happen. 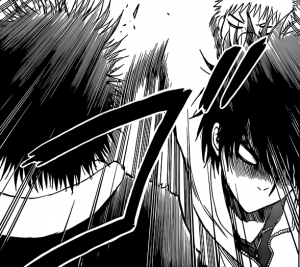 As hard as it becomes to blog about Beelzebub, this chapter at least makes things easier to write about. Mind you it's still no picnic, but we're at least given something to talk about in regards to this series.

At least we're moving back onto the main story, although it doesn't look so relevant to the demon plot of the series. What we're moving towards is the delinquent on delinquent side of the story that we saw at the start of the series. It really looks like the battle for the top of Ishiyama will commence once again and this time with Oga at the top.

It's a return to the familiar. Right now I don't have a problem with this idea, nevertheless I won't know until it actually starts. This chapter was a good transitional/arc start chapter that got the ball rolling with some comedy centred around Beel for a change. I found it amusing and a nice change of pace from what we've had for the past few arcs - no Beel included in the comedy. 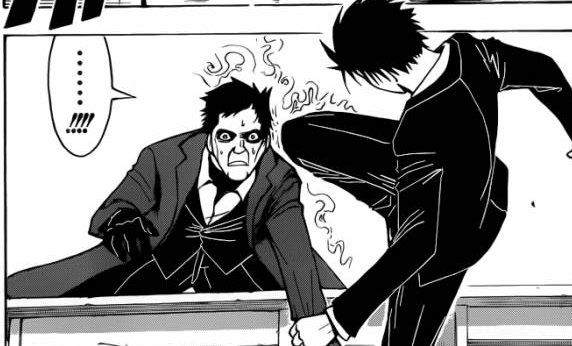 Kurasuma-sensei, didn't know you had it in you.

Genuinely happy about the direction this arc has taken and also excited about the choice of focusing on Kurasuma. Often overlooked or put lower down on the hierarchy - Irina's attention seeking at work here - we've yet to learn more about him.

It only makes sense that he is in fact a boss character that can stop one of the best assassins in the world effortlessly, thus making him higher than Irina in the hierarchy. Whether this was a surprising development or not, I think people would agree it was a great one because of the impact it has on this arc. For me it's also a matter of personal preference, but I can't imagine non-Kurasuma fans complaining so much about it. 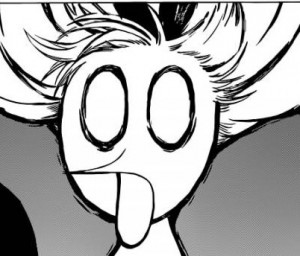 Here's the Chitoge chapter that a good percentage of you have been dying for. I personally think most chapters end up going back to her, so wasn't squealing with joy - also being on team Onodera, I can't express overt joy for a chapter like this.

Putting my preference of Onodera over Chitoge on the back burner, I actually found this chapter fairly enjoyable. As per the norm, Nisekoi stuck to a simple and clich d plot and then gave it its own flavour with the comedy and over-the-top art for the facial expressions.

Even I can't hate a chapter where Chitoge goes to ridiculous lengths to get Raku to notice her. It was a good chapter no matter how I look at it, so no complaints from me.

Something tells me that this chapter will illicit three types of responses:

For those of you who had the third response, Haikyuu!! is a wildly underrated sports series about volleyball. It started 2 months after Nisekoi and so I guess that made it most viable for a crossover - Weekly Shonen Jump has these once in a while e.g. One Piece x Toriko.

The balance of the chapter was very much equal. Fans of either and/or both of the series can find some type of joy from the chapter and for the small number of fans that like both (like me) can really enjoy the silliness of the chapter by seeing the characters act like they usually do.

If I had to speculate, this crossover was to further promote these two rising stars. Incidentally, both are by authors who have had a series axed - makes you feel happy for them, knowing they found success after striking out. 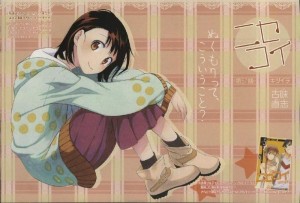 This was a hard decision to make. As much as I love both series, each of them had a very strong chapter and for different reasons. OP had a great plot twist that lead to the next part of the story whilst AC revealed the power of one of my favourite characters.

I really didn't have to think about this one. The choice couldn't have been easier; even if all the good action scenes couldn't stop this wreck of a chapter.