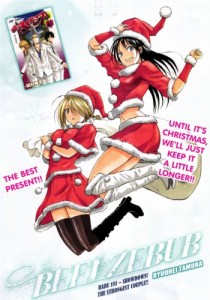 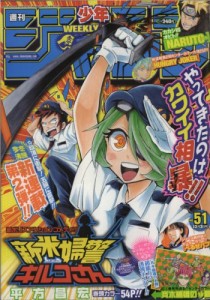 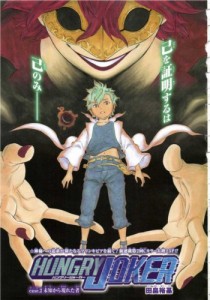 Weekly Shonen Jump #51 marks the start of Shinmai Fukei Kiruko-san as well as the end of Koisome Momiji. One Piece was absent this issue, leaving the other series to pick up the slack. And boy did they deliver.

Anjou Haruki was eagerly awaiting the day he would get his first junior in the police station at the rural town of Nagashima, so without a second thought, he accepted the responsibility of training and looking after someone who was just transferred to his post. However, not in his wildest dreams could he imagine that his new junior, Otonashi Kiruko, is a former mercenary without an ounce of common sense. Along with her superhuman strength, how will Haruki cover up for all the trouble she stirs

So how was the actual manga

Far be it for me to condemn any new series, but this one was not good. Not Takamagahara bad, but certainly not good. The comedy felt too obvious and not in a good way. Anjou as a character failed to be likeable and played on the perverted idiot stereotype a little too much. Otonashi is meant to be a moe character with delusions and homicidal tendencies.....how original. It would have been acceptable if the interactions were funny, but they weren't.

The art and the idea of the story reminded me a little of Hokenshitsu no Shinigami, with less clarity. Much like the aforementioned series, this one is going down the comedy with some plot route and unfortunately hasn't started strong. Of course this is only the first chapter, so I can't write it off yet.

That said, not a good start. Doubt it will last in Weekly Shonen Jump. 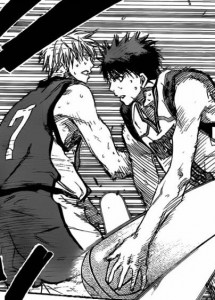 And there you have it! Definitive proof that Kagami has reached the Generation of Miracles.

Not exactly exciting or new. My guess is that many have thought this since he beat Aomine and Murasakibara, not to mention Aomine's comments last chapter. Still, one can't help but enjoy the moment.

Quite an empty chapter otherwise. Barely any developments occured....well nothing major until the very last page. Until then, it was more of the same and of course Kise had to leave because of his injury which means that Kaijou has to step up their game to stop Kagami. Something tells me Kise's struggle may be exactly what he needs to enter the zone.

It's only logical to expect him to do so, as the other two Generation of Miracles did before him, and I'm excited to see a full on battle. One thing I am worried about: losing interest in Kagami. He's entered the zone twice already, and that's an easy way out for Seirin to win again.

One thing I do have a problem with, is Kaijou figuring out Kuroko's vanish shot. This feels a lot like the Touo match, where his vanish drive was stopped. In a way it's good, because Akashi and Rakuzan would have stopped it anyway but apart from that, the story is being recycled. 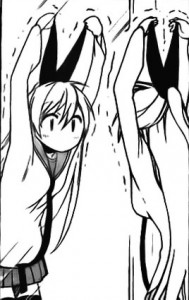 And we're back to the original story.

Finally the locket is back in our focus and now the romantic competition is bound to heat up. I always assumed that the locket would be brought back into the story, and now it plays a significant role. Ultimately, I don't think the locket will play the deciding role in which girl gets chose, but as we see here it does stir up the girls' feelings.

There was a slight satisfaction seeing Chitoge all jittery. She isn't my favourite character but I must admit seeing her all nervous was fun. I don't mean that in a weird way, just that she's been so headstrong and abrasive so seeing her docile is fun and refreshing.

Even so, my favourite moments in the chapter included Marika. She always brings some craziness that you just can't help but love. Case in point: stirring up the pot by suggesting an engagement ring is in the locket.

So far, so good. I do hope the story doesn't become fixated on the locket, because it seems like an easy way out. What Nisekoi has to do now is properly develop the romantic relationships, and it's doing just that.

This is genuinely one of the moments I've been waiting for. Since the Royal Guard was mentioned I have pined for their introduction, more-so when Bleach didn't end. Suffice to say, their introduction was as badass as I'd hoped.

I like that there's only 5 of them. Yes it is a ridiculous power up, but that's what I always suspected. Since Squad Zero is comprised of promoted captains, I had always assumed they were on a different level; even if that level is equal to the entire Gotei 13.

Interesting character designs as well. I'd never though Kubo-sensei was one to draw a pompadour character and to have some goofy looking characters. Well it doesn't matter now that we have a new crop of characters to learn about as well as about the Royal Guard in general.

Should be a fun few weeks. 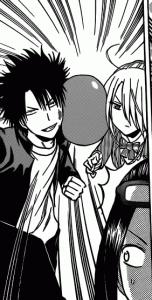 Leave it to Beelzebub to take it one step further on the crazy scale. Soon it's not going to be making sense, and for now we must embrace the funny.

For me this arc doesn't carry the same charm the Furuichi arc. It's fun, but it's not overly original and that's what makes it inferior to the previous arc. The previous arc was great because it did something new, and this one isn't providing the same joy.

This chapter was good, leaning on okay. I foresaw something like this happening but I wasn't ecstatic about it.

For some reason though, I can't figure out if I'm happy that Hilda is back to normal. Again I was expecting it to happen soon, but not this soon. There's possibly some wasted potential here with her returning so quickly, but I didn't mind so much.

Kind of an average chapter for Beelzebub. Not really exciting. The arc isn't moving two fast, but between this and the Kanzaki x Hanakawa shipping in the previous chapters, there isn't much. The arc is slowly loosing its charm.

Interesting that alongside Bleach, Naruto had a pretty great chapter this issue.

It's one of those chapters you read and enjoy for the action. There was certainly plenty of action, all leading to the big plot twist: the Jyuubi has been unleashed! This should definitely spice things up a little bit, and speed up the war.

Quite the surprise, but when Obito started losing it became the more obvious choice. Obito was never going to loose to Kakashi and admittedly, there was a moment where I forgot about Madara; perfect for a dramatic ending like this one.

Now I assume there'll be more fighting and less whining from the characters. It's doubtful that Naruto, Gai and Kakashi will fight the Jyuubi on their own, so reinforcements must be showing up some time soon. If anything this is also the perfect time for Sasuke to appear; not necessarily now but soon.

Finally something decent from Naruto! 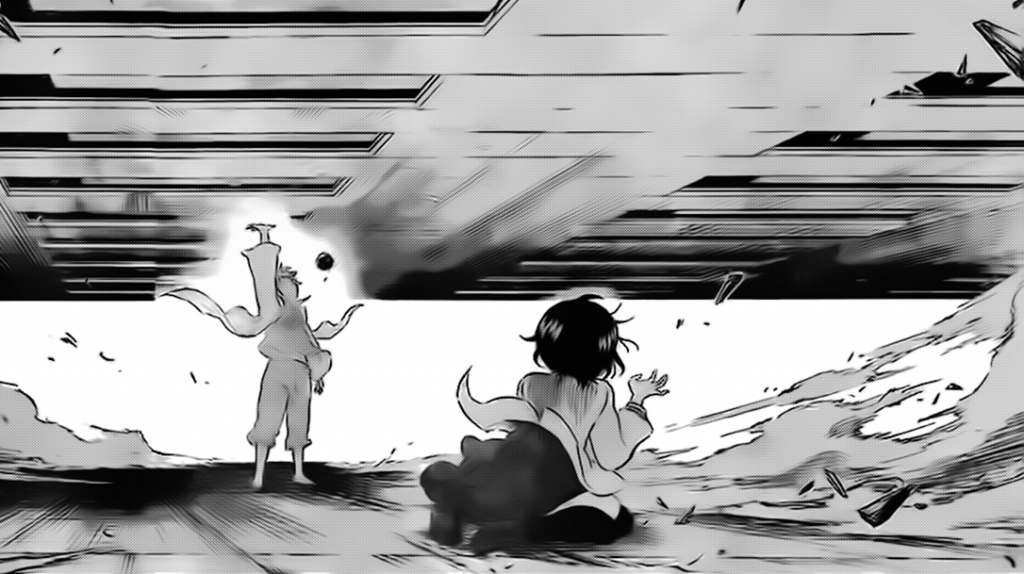 It may be too early to be optimistic, but I like this series.

Hungry Joker has had one of the stronger starts in Weekly Shonen Jump in recent memory. There's a dark feel to it with both the sci-fi and the mystery, something that works very well.

I'm still getting some D.Gray-man vibes. Now I know as of late that series hasn't been great, but early on it was a force to be reckoned with. What really brought that nostalgia was the encounter with the villain. It's happened already and it provides instant excitement to the story.

My only concern is that this sudden introduction is just to keep the manga in the running. For the mean time it works, but at some point the fast pace could be detrimental. Minor details aside, Hungry Joker has had a good start. Now let's see it improve.

Bleach was the obvious winner to me. Squad Zero has been my most anticipated arrival.

Shinmai Fukei Kiruko-san did nothing for me and that's why it was the worst. Some series underperformed but this one was the least impressive.

[important]Weekly Shonen Jump #52 will be the last of the 2012 Issues. This is only in name, and a few more issues will be released before the end of year.[/important]