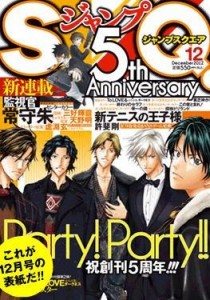 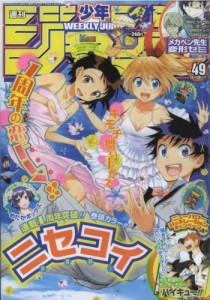 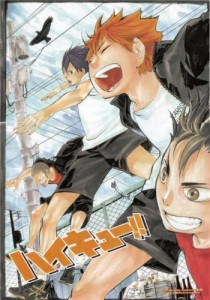 Weekly Shonen Jump issue #49 marks the one year anniversary of Nisekoi with a cover and lead colour page. This issue also marks the end of Takamagahara's short-lived run in the magazine; ending at 17 chapters.

There is also some news about upcoming series at the end of the review, but for now let's check out the chapters of this issue. Also there was no Naruto this Issue. 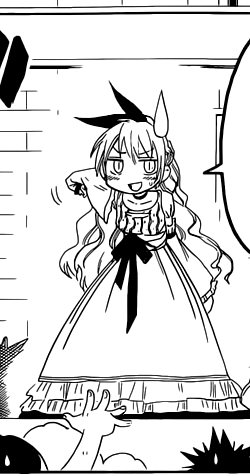 O Romeo, O Romeo, this is just the unholy mess that one could expect from Nisekoi at times like this. If you recall the whole love charm ordeal, this one follows in its footsteps.

As usual, the mess is what makes this chapter hilarious. There was just so much going on and because of Shuu adding gasoline to the fire in the background, the chapter was even funnier than usual. Marika's little OniAi moment just felt like Komi-sensei's way of saying he's watching such a garbage anime and it was disappointing because it felt like an easy way out for comedy and it was just a little over-the-top.

Amidst all that craziness, there was better comedy and Claude stepping into the play was the highlight for me. Cluade's entry being my favourite moment was simply because he's always there in a somewhat creepy way that works well with the comedy, and in this chapter his stupidity is at its highest.

The end is what you'd expect from any romantic series. Chitoge has now admitted her feeling, which for me should signal the end of the series but a few comments online and the wording of the final chapter's tagline lead me to believe otherwise. I do think it's time for Nisekoi to end but given the circumstances, it could easily be stretched just because it's popular. If this happens, the series will just get boring, so I hope there isn't much left in store for us. 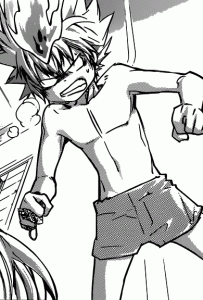 Speaking of series that will end, it as been "confirmed" that this is the penultimate chapter of Reborn! Confirmed is in quotation marks simply because ANN refuse to report it until it has been published and Manga News reports it earlier on its twitter feed.

Something tells me this chapter will have readers annoyed. It must have felt a little disappointing knowing that the question of Haru vs Kyoko wouldn't be answered, leaving many unresolved bets with only bragging rights as the prize. For me, it was a better choice not to have the confession out there. Call me hopeless, but I've really grown to like Haru and seeing her rejected would make me sad. Before anyone calls me out on anything, I'm making it clear that I wasn't interested in the romance aspect of this series.

Penultimate chapters are usually used to tie up loose ends and to answer as many questions as possible, but in Reborn!'s case there wasn't anything left to answer. This was just a reminder of what the manga was like back in the day, with the main question being answered next chapter. Will Tsuna ascend to the title of the Vongola Decimo

I'm not going to voice any opinions about that since the series is ending next chapter and all I'll say is that Reborn! has left no stone unturned in terms of the story, so the ending should hopefully be Tsuna-centric.

Final Note: Check the preview of the next issue of Weekly Shonen Jump for why I think the next chapter is the last. 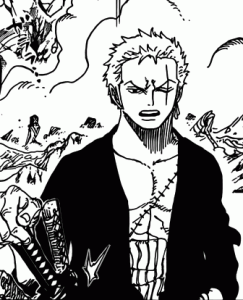 Best way to sum up this chapter of One Piece, is the word boss. Roronoa Zoro is truly a boss and he's not even trying to be.

No surprises that I love anything Zoro-related, because I find his stoic demeanour and unlimited swagger in battle so much. It's also great that this particular chapter works so well in improving our understanding of where the characters are in terms of power.

Last chapter left a little confusion in terms of our understanding of Zoro's powers. It appeared like he couldn't use haki because Tashigi ended up staying behind to help him. So much for Tashigi's help! I'm honestly glad that Tashigi could't be of any use to Zoro, because the idea of him being able to lose to her just doesn't work with the story. Unlike Smoker and Luffy's relationship - Garp and Gold Rogers' incarnate - there is a completely different dynamic.

Zoro has some kind of issues as it were with women fighters. Oddly enough, this deeper part of his character doesn't really go with One Piece's happy mood and on its own it's a little too serious. Luckily with all that looking cool he was doing at the end, the chapter came together quite well. 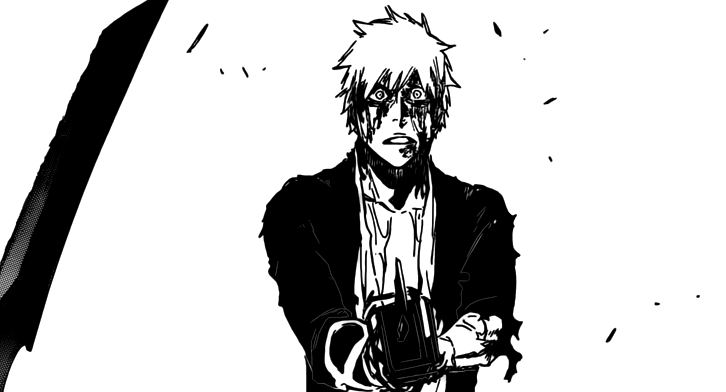 What do we have here More plot twists !

It's interesting that this chapter brought up something that happened so long ago and has been off my mind throughout the entirety of Bleach. Anything to do with Ichigo's mum (that I can remember) was in the early days of not only the manga, but also the anime making it easy to forget her.

I do think Ichigo's genetic make up is getting a little out of hand with all that is going. At this point it can easily come across as poor judgement from Kubo-sensei due to his inability to keep it simple. Ichigo is now part Shinigami, part Hollow and part Quincy and of course part human.....so he's the one to unite all the worlds right

Not really what I was hoping for from Bleach and at this point it's a little too convoluted for my liking. This new development certainly has promise, but I feel like it's been overshadowed by the sheer volume of new information we've been exposed to.

One thing I did like, was that the arc wouldn't be settled in one continuous sweep. There is simply too much going on right now, and I'm looking forward to a regroup of all the characters and whatnot, although I suspect there might be another power level up in store for us. 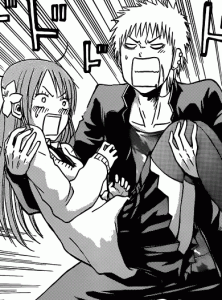 Shipping has never been more fun than here. I am all but convinced that I'm going to love the rest of this arc.

Whilst it doesn't give me the same joy as reading the most recent arc with Furuichi at the centre, there is a certain hilarity that comes from pairing up all of these miscreant characters. Kanzaki and Yuka end up as the main couple in this chapter for pairings, even though they only appear at the beginning and at the end. This was my personal favourite, because of how long they have had their relationship built up in a very aloof way. Just seeing everyone pair them up made me laugh.

As usual, with a comedy series like this it's hard to really talk about anything else. The arc is moving in a direction we're all too familiar with and love because it makes Beelzebub the series I got into, and finally the romantic comedy element is really getting some focus.

Final thought about the chapter: love how Furuichi weasled his way into the story as Nene's partner. Love the pairing.

Just to inform those who read the series, the English scans are behind and so I'm reading the up-to-date Spanish scans for the series.

Furihata didn't last long in his debut match, and that's okay. His departure from the court was met with a moment of happiness which really came through and left me satisfied with his brief yet contributing performance. Furihata represents many benched players that try their hardest to get onto the court. As someone who knows that feeling, I was extremely happy to see it brought up in Kuroko no Basket even though it may not be understood.

Keeping the focus off Kagami and Kuroko, the chapter continued to show us the fruits of labour for the other team members. Finally we had a chance to see someone other than Hyuga, Kiyoshi, Kuroko or Kagami show off their amazing growth! And with the Rakuzan match right around the corner, the other members really had to be brought in to keep the final match interesting.

Izuki being in the focus still means that we're being shown the starting five's growth but all things considered, his progress is long overdue. In recent memory, he's been about as present as the benched players and has contibuted almost nothing to the story. His new attack suits his 'hawk-like' personality rather well.

As a chapter dedicated to introducing a new move, there wasn't much else going on. It followed a simple and formula that most other shonen sports/battle series use and that was that. The match is steadily improving by focusing on the other players, and I'd be happy if we didn't see Kagami v Kise until the very end.

Can you say boss without thinking of Zoro That's why One Piece was the best chapter this issue. There weren't really any terribly bad chapters, but Kuroko's was a little less exciting than the others.

I'm guessing those enjoyed Hungry Joker's one-shot are ecstatic to finally see the winner of the 2011 Golden Future Cup get serialised . Reborn! had a colour page in the last issue, so I believe this colour page is to celebrate it's ending.