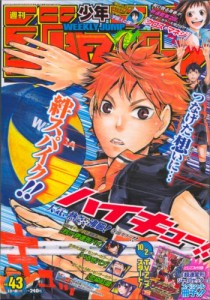 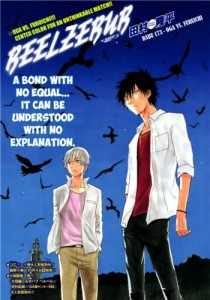 A rare occasion to see Haikyuu!! on the cover of Weekly Shonen Jump but always a pleasure! Some good chapters this time and only one series failing to meet the standard.

Care to guess which series that might be Read ahead and find out:

[NOTE] Review is going to be short since I'm moving house and thus don't have time to give a full detailed breakdown.

With the biggest concern being Yamamoto's downfall, it's hard not to have fun with Bleach.

Yes it's another chapter of him being completely badass and unrivaled but it has to come to an end and when that happens we will never get to see him again because he's bound to be taken down by Jura Bach any day now. That said, even Jura Bach seemed a little worried, and that fear is testament to Yamaji's unreasonable power.

If you can't remember all of the powers, here they are courtesy of Bleach's Wikia page on Yamamoto:

As a last note, I'd add that his latest version of his bankai is on the ridiculous side. Reviving the dead is bordering on Naruto territory. 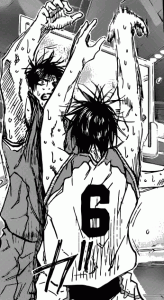 Midorima and the rest of Shutoku were always going to lose, so what was more important for this chapter was the execution and not the outcome. I personally really liked how the chapter gave Akashi another layer of frightening power, showed us a little bit of one of the other Crownless General's skills and made Midorima look good. One of the things that I'm most anticipating is seeing the remaining skills of the Crownless Generals but that's definitely one for the final match.

A loss like this is for Midorima is esentially the same as Kise's loss against Aomine. He came in expecting to stand a chance but in the end he couldn't do anything against his former team mate. There is an obvious difference between these two rivalries and that is to do with Midorima and Akashi's one being longer lasting. If you remember back in the early chapters, Aomine and Kise were more friendly since Kise was yet to become a threat but Akashi and Midorima were captain and vice-captain as well as the more calculative of the bunch.

Sad end for Shutoku but I think this match was well done. It actually showed the teamwork at one of it's best and summed up Midorima's growth as a trusting member of the team very well. With this and the length being just right, it was a nice end to the arc.

The highlight of this chapter was when Oga shouted 'Stop Wasting Panels.'

I honestly forgot about Behemoth, so I had a few doubts after last chapter about how Oga and Furuichi's fight was going to turn out and luckily the solution was logicl(ish) and made for an exciting and slightly hilarious fight.

Got to say I wasn't expecting the final part of the chapter and what's more I wasn't expecting there to be more to the story of the arc, especially not about Oga and Furuichi's past. The surprise comes from the lack of any real character development in Beelzebub - the same with many comedies - which I've never considered to be a bad thing because it doesn't detract from the comedy which is the series' selling point; the story comes second place to the comedy.

I'm intrigued to see what happened between Oga and Furuichi in the past, even though I honestly have no idea how it'll turn out.

Doflamingo's crew is so damn weird.

Besides that small observation, he continues to be an impressive villain. Even amongst a shady group such as the Shichibukai, Doflamingo continues to be the shadiest and the snippet above is the perfect depiction of that. He's not just living the life of a Pirate Warlord recognised by the World Government, he's living the life of an underground broker which apparently is close to one of successful drug dealer and clad in women, wine and general decadence.

I'm not quite sure what Oda-sensei was trying to achieve by having his entire appearance be made into an assassination attempt gone terrible wrong but it wasn't actually humorous. No complaints on my part, he looked even more of a badass character though I would have liked to see someone from his crew take out the assassin to give him more of a boss look. It didn't really matter in the end, since he did give the order to kill Law mercilessly.

Now that I think about it, the chapter was mixed in terms of quality.

I hate this chapter.

This totally case of personal preferences, which is an essential part of enjoying romantic comedies. My disappointment stems from the sudden cut-off with Raku and Onodera, obviously because she's my favourite girl in Nisekoi. Up until that point I was loving every moment of their continued pure "relationship" which suddenly ended in an abrupt and forced manner.

Personal preferences aside, it does feel a little unfair to give Onodera more chapters when she had 2 dedicated to her personal story not too long ago but I was quite annoyed how it went back to Chitoge at the end of this chapter, and we didn't even get to see anything new from her.

I still maintain Chitoge is the most unlikeable out of all the heroines and on occasion she gets way to much attention. This may have been fine when Nisekoi was all about the love triangle but when it changed into a harem series, her attention should have lessened also.

Now I realise that she could be considered the main heroine of the series but I think she looses out when compared to Onodera and on occasion Tsugumi. This might be petty and childish but GIVE ME MORE ONODERA! 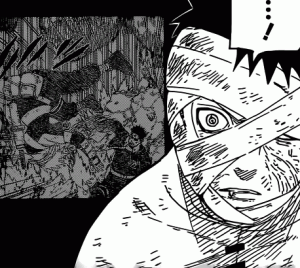 Yeah I purposefully put Naruto at the bottom in order to make you scroll down and only then find out that it was the worst one this issue.

I was so bored with it I've decided to sum up the flashback using the narrative:

It was then Azeriraz realised how unlikely it was for Naruto to regain it's momentum. The pettiness of Obito's quest for revenge was looming over his head as he suspected it would soon be made into the reason for the Ninja World War. Azeriraz could have forgiven this at one point way back but after suffering through weeks upon weeks of uninteresting flashbacks, he felt less inclined to do so. He understands that men have started wars for less but the lack of ulterior motives on Obito's part was definitely a big disappointment.

That's about it. I don't like where the story is going because it doesn't fit the current situation and feel that Naruto has developed. Worst chapter of the issue. 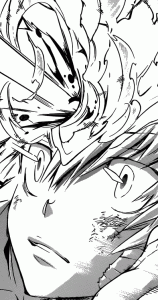 Almost forgot about this chapter, but it wasn't for any reason. In fact it was very good.

With a sense of finality present, it didn't feel at all inappropriate that Reborn reverted to his adult form and sent a dying will bullet at Sena for possibly the last time ever. The moment was great because it showed Reborn entrusting Tsuna with his life and the life of the other Arcobaleno's instead of calling him useless Tsuna.

The fact that Tsuna only now realised who the adult hitman is does make it a little more obvious that Reborn has put all his faith in him and hopefully this final fight should bring about a heart-warming and conclusive end to the arc, and possibly the series (though I'd expect an epilogue of some sort before it truly ended).

Now it's Bermuda v Tsuna, but not just regular Tsuna. This time he's been shot when he's already in his dying will mode, which could be the weak link if not explained logically in the next chapter. How long the fight will last is also an issue but we have no way of knowing that until the next chapter at the very least.