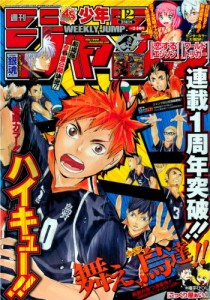 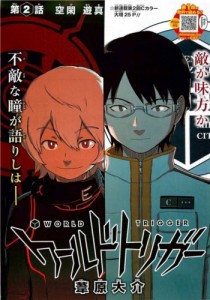 Without my usual dose of One Piece, there's something empty about this issue of Weekly Shonen Jump.  It didn't help that the usual series had transitional chapters, leaving no lasting impression.

There was a lot left unexplained, that kind of hampered this chapters overall quality.  My biggest qualms were surrounding the obscurity and lack of explanations surrounding Unohana's bankai.  A pity to say the least since my heart leapt in excitement after reading the words on the page.

We're it not for the lack of description, or better yet rushed feeling, this would have been a lovely conclusion to the fight.  Seeing as how it's not being dragged on, we should see it as an important stepping stone on the road to the series' completion.  It had a beautiful sadness to it that we've seen in previous chapters, and that too made the chapter a little more enjoyable.

If only it wasn't so convoluted. 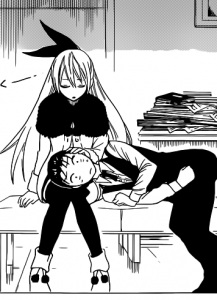 So I ended up enjoying the Chitoge arc more than I like to admit.  This chapter is proof that, whilst I'm rooting for Onodera, Chitoge is not a bad character whatsoever.

There were definitely a lot of adorable moments in this chapter.  The artwork on Chitoge's crying face was just too much, and then the "girl talk" scene to round it out.  As much as I hate to admit it, this is one of the few chapters that make me like her more despite Onodera still being my favourite.

The romance continues to escalate, but to what end? We've now reached the point where Chitoge can more or less admit her feelings for Raku, so logically, I'd expect for us to move onto the next girl.  We still have the remaining girls who need to get their time, each with their own plot - Marika's drama for example - and presumably, Raku's becoming a little wiser along the way.

A very cute and adorable chapter to bring a close to a better-than-expected arc for a girl I don't care about.  Since it was starting to wear out its welcome, I'm ready for the next arc.

Not much went on in this chapter, but that doesn't mean it wasn't a good build-up/transitional chapter.

The Ishiyama originals all regrouped and stand united in their fight against the new generation.  Even if they try to cause grave injuries to each other, they're the only ones that may do so.  Not those young pups.

As this took up the majority of the chapter, I don't have much else to say.  Good to see some more comedy featuring a very shy and in love Kunieda, and the build-up was good.  You just get the feeling that we're headed for one of the more important Beelzebub arcs - could be an ending or not.

With expectations and tension being built up, it only makes sense to end on a new piece of information.  Apparently Nasu could be allied with the opposing force of the demon world.  That should come in handy for some more over-the-top fights and scuffles, so let's wait to see what's in store for us next. 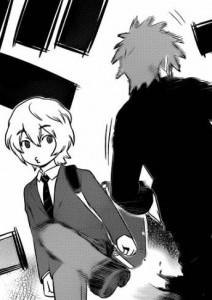 Judging new series is no easy task, especially when it comes to Weekly Shonen Jump.  Some start of strong but fizzle, others start off weak and improve and others just don't make enough of an impact to register as good or bad.  I guess World Trigger falls into the last category.

With the first chapter being relatively average, I was wondering what direction the story would take in the second chapter.  Expecting something a little more action-paced, I was a little taken back by the uneventful nature of the chapter.  Usually new series have to "overcrowd" their first few chapters to make any type of impression on the readers.  This is something I've found to be a product of the double-edged sword that is Weekly Shonen Jump's vicious ranking system.  I'd like to say, I was pleasantly surprised by this chapter but I just can't.

It just doesn't do anything to give the story depth.  There are still many questions about the world and our main character that remain as vague and ambiguous as my feelings on the first chapter and that worries me a little.  It could be bad scans but I just didn't understand what was going on.  Our main character is, I guess, part machine beast (forgot their names) and that's why he acts as strangely as he does.  Sounds about right; generic and obvious for this type of story.

Nothing much happened in the chapter.  There was a series of attempts at humour, although it didn't do anything for me. 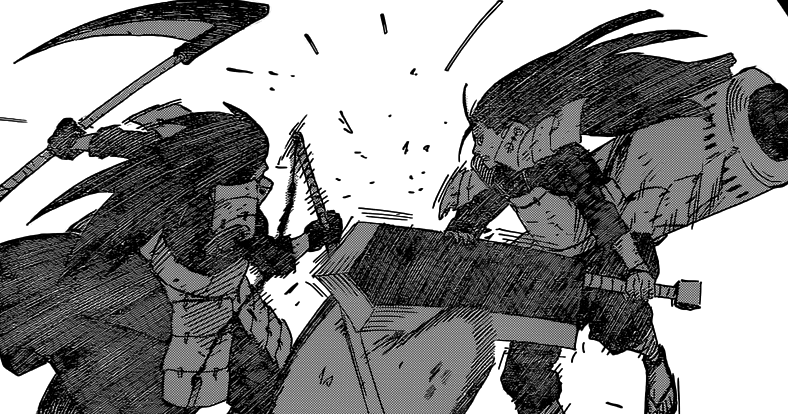 So there was a lot of talking in this chapter.....I just can't remember any of it.

It's still early days with this arc, and that means it can go either way.  As much I'm happy for the change in focus to something more interesting, I can't help but feel uninspired.  There just isn't anything here that stands out or is worth being remembered.

The hokage are still hashing out information we're very familiar with.  Nothing new or exciting, and even Hashirama Senju's presence feels somewhat useless.  We already knew he was the strongest shinobi ever, we didn't need a feeble demonstration of him breaking out of Kabuto's control.

I fear this arc may go end up going down the route I fear; the flashback.  Regardless of the flashback being more interesting in theory, the sheer number of them used in recent memory is ridiculous.  I just hope Naruto can churn out something fresher with this latest arc. 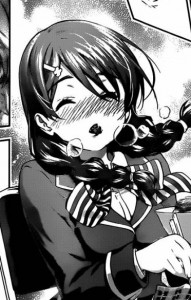 I have to say, out of all the build-up chapters in this issue of Weekly Shonen Jump, this was my favourite.  It may or may not have to do with my bias and tendency to favour the infamous ecchi cooking manga.

There's nothing I can really add to the series by blogging about it. In short, this was a simple build-up chapter in anticipation of Souma's first shokugeki that was well-paced and enjoyable to read.  Partly due to there being more to the chapter than Souma cooking up a dish and dominating - which I still love - but also because this first battle will most likely set the stage for the rest of the manga.

Since this was a less packed chapter, I found myself saying, "Next chapter, where?" at the end.  I usually reserve that for series with slower scans, but I'll make the exception for Souma. 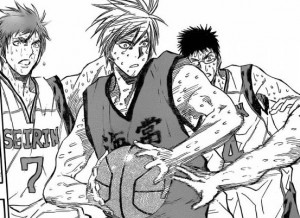 As tired as I am with the Seirin vs Kaijou showdown, I found this chapter to be more enjoyable than I expected.

I'm still very much over the drawn out nature of the second half of this match, but I can at least appreciate what Fujimaki-sensei was trying to accomplish.  What he couldn't create in the last few chapters, he managed to do so with this one.

There was an actually sense of urgency and tension in this chapter, that I didn't see in the last one.  It doesn't seem like the hardest decision to have Kasamatsu be the one aside from Kise to pull up Kaijou in their hour of need, but that really is how it should be.  The captain is always the last bastion of hope for his team mates, and Kasamatsu is one of the best captain characters in Kuroko no Basket.  Because of that, he deserves his moment in the sun.

Much like Souma, blogging Assassination Classroom is hard.  It's a manga that speaks for itself and that is enough (for the most part).

We're still following a set formula in the series.  It doesn't matter who the student is, including the most recent one, the "recruitment process" so to speak doesn't change all that much.  As such, it makes getting though each arc an easy read and the addition of new students to the story is hardly a bad thing.

Like Nagisa said, it just doesn't feel right for someone outside of Class E to assassinate Koro-sensei.  They're working hard to take him out, so having someone else swoop in and take away their kill is just plain wrong.  I'm also guessing they've grown attached to him by now, and memories of chapter 28 just prove that they're becoming a very dysfunctional family of sorts.

I suspect next chapter will bring about the conclusion to this arc.

I hate to admit it, but it was just so damn cute.

I know this just looks like me being bitchy about Naruto, but I just forgot what happened in this chapter.

A new spin-off issue called Jump Vs is being released.  It'll include various one-shots centred around the battle genre. [Source]