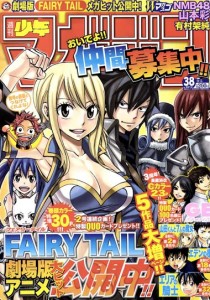 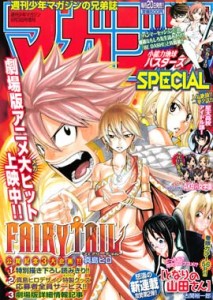 In response to the readers poll I posted a little while back, here's a weekly manga recap for manga not running in Weekly Shonen Jump. Depending on the scanlators' consistency, you might see a few chapters that come out later than normal and thus ending up in a different weekly review.

The list of series that can come up in this review isn't set but will most likely consist of the following series:

This time round we have Fairy Tail, Gin no Saji, Kami Nomi, Yamada-kun, Kimi no Iru Machi and Denpa Kyoushi.

Well, not boring but definitely weak when you compare it to the previous chapter. Sting's fighting just didn't bring up any excitement for me much less make me care about his promise to Lector.

I am glad that this chapter didn't turn to the clich of Natsu and Gajeel being beaten down heavily and then having to rally back by calling upon strength they shouldn't have. In that sense, the part of the chapter where they got up and were ready to kick some more ass followed on nicely from the previous chapter where they dominated like bosses.

The ending was nice and humorous (Natsu putting Gajeel on a cart and sending him off) but I seriously hope that Gajeel isn't taken out of this fight, just so Natsu can show off even more.

Some of you might know how much I love Yankee-kun to Megane-chan, so I was deligthed when I discovered an ongoing series by the same author with a similar name. Unlike Yankee-kun, which apparently ended (I'm waiting on chapters to be scanlated) with no solid romantic conclusions, this one's more promising if your actually looking for a romantic story. Now on to the chapters up for review. 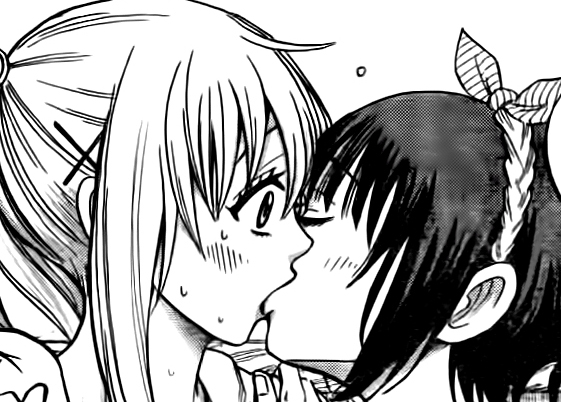 This is a rare occasion since Miki Yoshikawa-sensei's last manga didn't really have any moments of fan service, which is unacceptable for a romantic comedy like this one.

The chapter didn't really accomplish much, but left me suspicious of the girl in Yamada's remedial class. The way she's silent points towards her hiding something. Besides this, all the kissing comedy this series is famous for was great and filled with the so many hilarious moments (girl on girl, guy on girl, guy on guy) before ending with Itou and Miyabi back in love with Yamada. I know the ending shouldn't have been that funny since the scenario has happened once before but it still made me laugh. 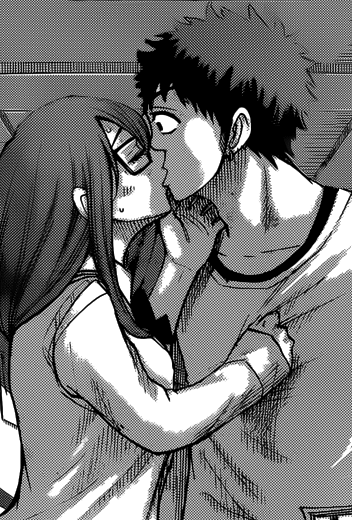 26. Suspicion confirmed! The girl in Yamada's remedial class, Otsuka Meiko, is in fact a witch.

This chapter sure took its sweet time in getting to that particular point. The pages with Yamada in Shiraishi's body sure seem pointless, nevertheless they were fun to read and were probably the only chance in this chapter for the more "in your face" comedy.

Meiko approaching Yamada (it's actually Shiraishi) was somewhat expected but she is different from the other witches in that she's very shy and actually a flunky like Yamada. Leave it to Shiraishi to figures this out instantly and end the chapter by telling the crew.

I'm guessing that we'll find out about Meiko's powers in the upcoming chapters. It makes sense that we don't know her power yet since witches powers don't work on other witches, so it'll take Yamada kissing her once more to find out what her power is.

A time travel arc was the last thing I was expecting from Kami Nomi, so when it happened a few chapters back I was left with feelings of confusion and a lacking of any guesses as to how the story may proceed from now on.

I'm liking the whole game set up where Keima has to be at the right place at the right time. It's a nice dose of irony for our protagonist who is so used to situations where he has to go online to conquer a gal game and now he has to do it in real life otherwise there could be serious repercussions. It's even pointed out by him how similar this setting is to when you reset a game, although this is more serious.

The gravity of the situation could have been portrayed better and at times the chapter felt a little slow but that has more to do with the whole arc feeling slow, rather than just this chapter. It also doesn't help that the Goddess arc which just ended was beyond fantastic, further making this arc seem weak. 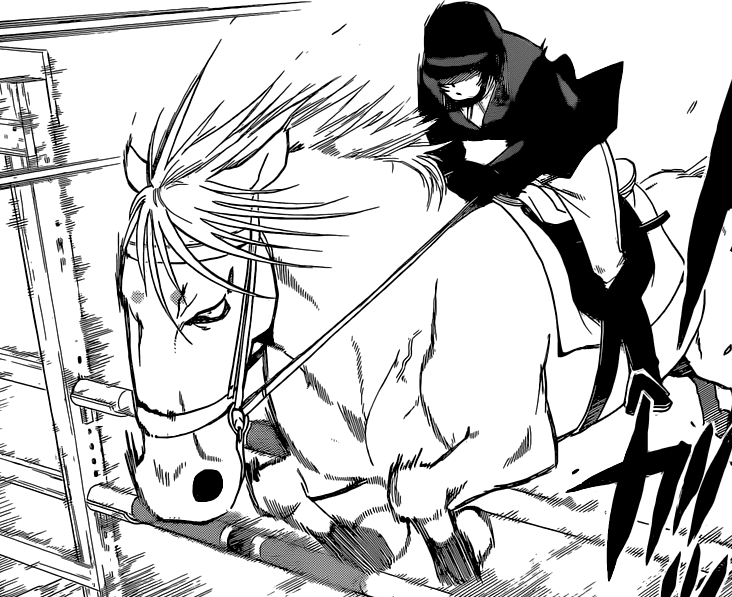 Silver Spoon has never been much for picking up the pace or having a story that's predictable, thus making this another regular chapter. This series never goes fast and those of you familiar with the series will agree (I hope) that the term "slow-moving" doesn't really apply.

With the focus of this chapter being mostly on Mikage, it feels like the autumn arc (since chapter 32) has been building up to this. Mikage's secret has been brought up once or twice during this arc but never for too long, making me forget about it on many occasions.

Something tells me that this competition is a very important part of Mikage's story. The chapter gave off a more serious feel towards the end (when she started riding) than it did throughout the entirety of Hachiken's race and made me think the outcome will serve as a big turning point for her character's story. Win or lose, I hope her secret is revealed soon. I didn't really care about it until now but since it's been brought up again, I'm interested again.

Overall, another solid chapter of Gin no Saji. The additional comedy provided by Ayame was still funny enough to make me want to see her more than just as a recurring character, maybe even give her a chapter or two with Tokiwa.

For all of you who don't know this series, let me sum it up in a few words. Think GTO meets Kami Nomi and then you get Denpa Kyoushi, a school life comedy starring a genius otaku teacher. Now let's move onto the chapters:

37. A nice little way to continue on from the end of the game tournament: keeping Araki and Nanami in the virtual world.

It made sense that Araki's confession about his gender was aimedd at Nanami. Being the first trouble child that was helped by Kagami-sensei, there's no one better to accept him for who he is and to not judge another person. Nanami' also happens to be the only male who has shown a lot of respect towards Kagami-sensei (all the other characters are women), which may have been a contributing factor for Araki's sudden confession.

That was pretty much the best part of the chapter. The rest of it was just okay and not that special, though I did enjoy the clich d scenario of a girl being hounded into hanging out with a guy happening in a virtual setting; have they not considered the possibility of it being a guy

38. Carrying on from the previous chapter, we still don't see much from Kagami-sensei. 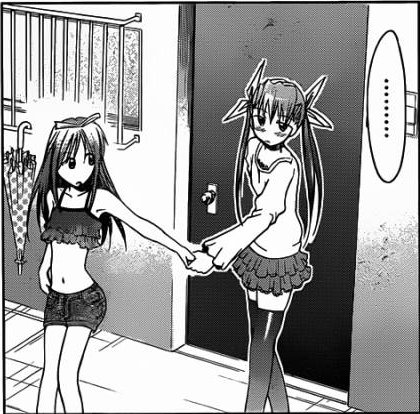 In a away his absense is understandable because he's trying to help Araki accept himself for who he is but it also helps by giving other characters a chance to get more involved in the story. In this chapter, the latter was very relevant to Sachiko, another student he's brought back to school.

Just like how Nanami told Araki it doesn't matter if he dresses up like a girl, Sachiko went one step further and bought him very girly clothes. Sachiko's involvement is just an extension of the "saved students helping to save another troubled student" plot this chapter has adopted. This works quite well because Kagami doesn't really appear.

It's also the first time Kagami hasn't really put that much visible effort into helping a student. Him acknowledging that he cannot help some of his students by doing stuff for them just proves how smart he is ( it also goes hand-in-hand with his lazy attitude).

I'm sure he'll be involved again when the tie is right but for the time being I like how he's not the centre of attention AGAIN. 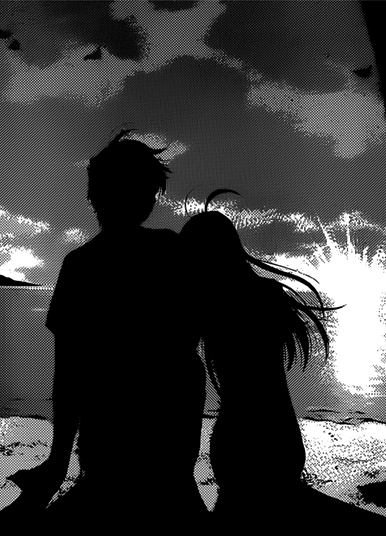 It's been a while since I've truly loved this series and this chapter on prolongs that time. Now I'd like to make it clear that I don't hate Kimi no Iru Machi (otherwise I would have dropped it a while back) but I am at that point where I can't really understand what the author is trying to do with the series.

This chapter was nothing special. The Haruto and Yuzuki finally made up after some confusing lost-in-translation moments courtesy of Miyu...... Boring and unoriginal. The fight however, did bring up an important point about Haruto and Yuzuki not being able to talk about their dreams, a problem in the relationship that will most likely end up being brought up again in the future. That was actually the only good thing about the fight and when Yuzuki admitted she got mad for such a stupid reason I got pissed of with her and the author for wasting more time with such a useless addition to the plot; it makes it look like those two haven't learnt shit from all that pain and sorrow.

Now that they're back together, I don't think I want to see much more from this vacation arc. I'd rather the story get back on it's overextended road to completion.

Yamada-kun isn't a series that'll get much attention from a lot of readers but it's consistency in quality is what allows it to rank as the best chapter on occasion. The chapters that we saw this week were both enjoyable, even though they didn't really accomplish much.

The fight in this arc has been stupid and quite frankly too pointless to be included in the manga. I still don't get why the author Kouji Seo-sensei makes his male leads to damn annoying; you'd think they would have learned how to make up with their girfriends by now.

Until next time manga fans!