A full line-up for this Weekly Manga Recap, which includes chapter reviews for Nisekoi and Assassination Classroom (the scanlations are catching up). As opposed to the usual banner, the image above are the latest tankobon covers for Gamaran, GE - Good Ending and AKB49.

Let's kick off the review: 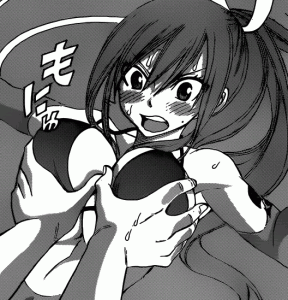 The filler arc in the manga starts and well....umm.....it's what you would expect from Mashima-sensei.

Fan service to the extreme in this chapter because let's face it, Mashima-sensei adds it whenever it's not appropriate but now that he's got the freedom to add it in a more appropriate setting, he's going to do so.

Much of the focus came back to shipping and gags. Of course in a series like Fairy Tail, this is more obvious than in other series of the same genre but still there it was. We had Jelal x Erza in the most fan service way imaginable (check the snippet from the chapter on the left) and Elfman x Evergreen (you know it's going to happen soon), so nothing new. Then to top things off we had a few gags, most notably Juvia's BL remark regarding Grey and Lyon.

Evidently this is only the first of three filler chapters from Fairy Tail, so expect more of the same or maybe something different but equally useless next chapter. 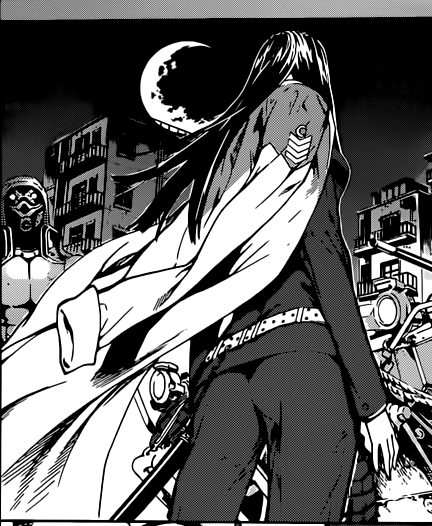 Enter the Jailer! She looks suspiciously like the one from Deadman Wonderland.....

Then again this entire series feels like an alternative version to Deadman Wonderland, so I'm not going to delve too much into the similarities of each series' jailer.

Much like with any series where the prisoner (some of them) is the victim, the Jailer's presentation as a ruthless and power-hungry emissary of justice was nothing short of textbook. I always find it funny when the Jailer is a woman, because in most series female are overlooked as the ones most suited for a role of dominance and hate, I mean you can't hit a woman can you It goes double if she's the one holding your life in the balance.

More about Jin's background began to revealed a little sooner than I anticipated, but now that the cat's out of the bag it'll be good to find out about the Lotus Flower incident. Just from the information about the 20,000 people who were killed the series is venturing further down this dark road, thus distancing itself from all of the other manga currently running in Shonen Sunday.

I'm not ecstatic about the timing of this possible flashback arc because it came after a filler-like arc but as long as it gets the right amount of attention it could bear some decent results.

Final Note: The song on the mp3 player is real. It's Edward Elgar's Land of Hope which is associated with being a possible UK national anthem. My best guess: that Japanese view of oppressive British rulers, suiting the image of the Jailer. 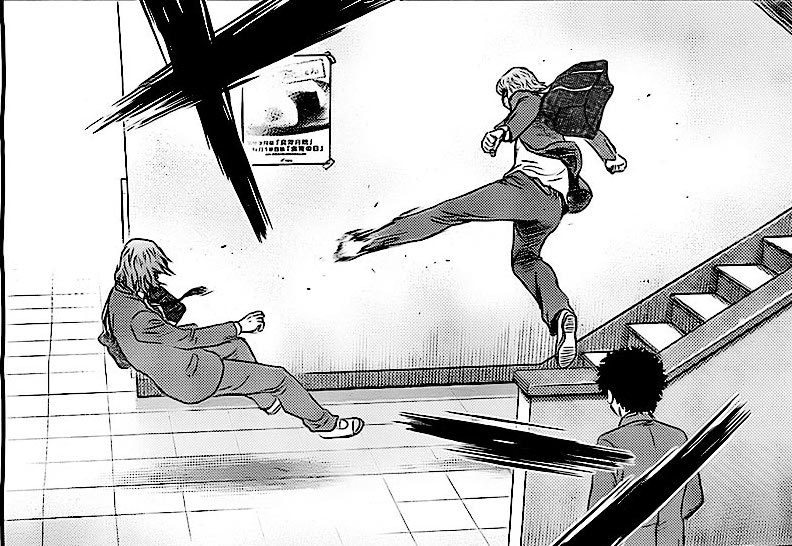 Azuma Watari..... why does that name sound so familiar Oh wait!

This chapter is proof why sometimes having a large cast, especially for a series that starts from elementary school, is confusing. It took me a while to remember who Watari was and that was only after looking through old chapters and the MAL forums.

Regarding the element of surprise, it was probably because I couldn't remember him. This isn't necessarily a weak element of surprise, considering he was out of sight for who knows how many chapters but Watari was also introduced as a championship contender, so that definitely added to the surprise.

With his reintroduction to the main cast of Buyuden I see another mini-arc centred around him and maybe a few flashback chapters. It's also probable that Watari isn't at a high level of boxing like he used to, which will result in them eventually starting the high school boxing club. 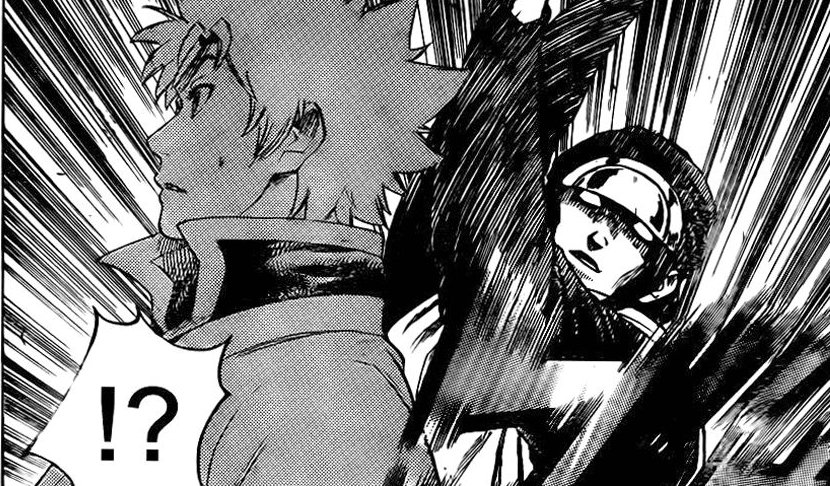 It's questionable why Gamaran moves on with its fights so quickly, though I suspect it doesn't have much choice in the matter.

After last chapter, it felt like the series was moving into its final arc(s). Jinsuke was always going to be the final boss but now all that stands in between him and the Ogame school are his personal guards. When you tie in the previous chapter's "break" before the final assault, it's hard not to think about the end coming.

Even with all this sense of finality, I just don't get why Gama was the first one to be forced into battle. Since the others will just end up progressing without him, it's very likely that it'll end with him appearing just as his friends are about to be killed.

In that sense his next opponent is perfect for the situation. He's Jinsuke's most skilled guard, so Gama will have to defeat him otherwise he has no hope of defeating his father.

Now the fight itself should last longer than Zenmaru's most recent one did. We've actually seen Gama in action not too long ago and what's more against a very important opponent, so this fight doesn't give of the same feelings of gravity but that's fixable as long as the fight plays out well enough. 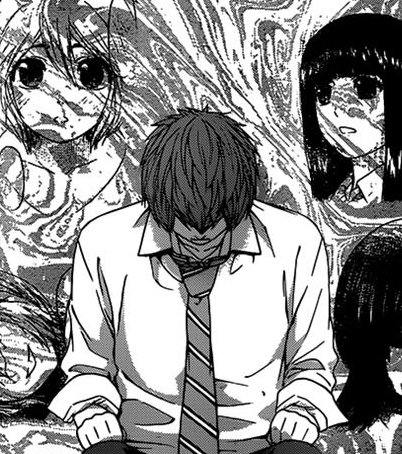 And so it begins!

The inevitable break up between Shou and Seiji has officially been started and it came at just the right time. GE is most definitely a repeat offender when it comes to excessive use of emotions such as angst, an offence that puts readers off this otherwise decent romance.

This time, there was just enough turmoil. It was never going to be an easy decision for Seiji to break things off with Shou and it's good that the chapter captured the difficulty of this decision and the chaos into which his heart was thrown into. Of course Shou wasn't a victim either.

Shou's decision not to tell Seiji the whole truth means she too feels like they are just "licking their wounds." Just like how hard it was for Seiji to move on and start dating her, she came running back to him the second she was dumped and it wasn't just because she had feelings for him, she was hurting and needed someone by her side.

Something tells me the break up will be amicable which is good. We've had enough of Shou and Seiji fighting in the past, so to see them end things on amicable terms would be a great display of maturity from a couple that otherwise acts like a pair of kids (Shou in particular). 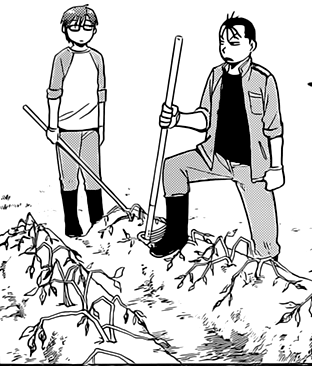 The start of new arcs never bring about excitement and Silver Spoon is no exception. However, what it lacks in excitement it more than makes up for in comedy.

With more of the usual and loveable comedy coming from reactions and interactions of the cast, it's hard not to breeze through this chapter. Tamako being skinny was hilarious as always and didn't feel as stale as I thought it might have been.

This arc already feels more direction-less than the previous one, but after weeks of leading up to the horse competition and still not knowing about Mikage's worries it's a nice change. With this Silver Spoon has gone back to its more random antics which I've missed and hope to enjoy for at least a few more chapters. 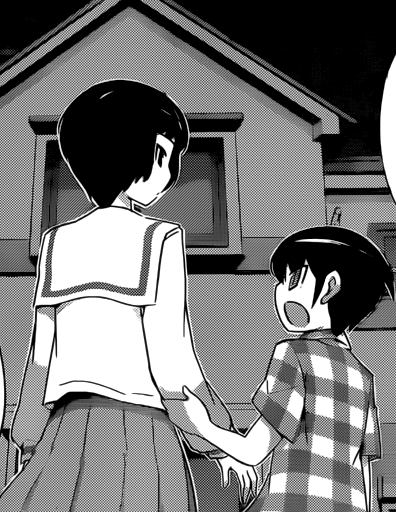 It's not over. Thank God!

In a way the almost abrupt ending made way for a possible mystery in The World God Only Knows. Keima still has to conquer Dokurou but he doesn't know how and the only thing he can do in the meantime is to keep kissing her. I'm liking the mystery introduced, considering how KamiNomi hasn't done it in a while.

This chapter managed to make up for the rushed feeling of chapter 200 and might bring with it some more interesting plot like what we saw with the goddess arc. Let's see how it play out.

The thing about Assassination Classroom is that it's a very formulaic series.

The concept is interesting and the first chapter of the series was something special but after all this time it's becoming harder and harder to see the series branching out.

This arc is no exception and keeps reminding me of GTO in the way that it tends to introduce people who hate Koro-sensei at first but then start liking him. Now that he's diminished the bodacious female assassin's capabilities, I can't see anything different happening.

I would have thought that she would cause him more trouble than Karma did but I guess her being made a joke of is just an extension of the humour used in the series. The humour is probably the biggest selling point of the series even if it's pretty basic; it still works well and always squeezes a laugh or two out of me.

Still I'd like the series to change it up a little bit, seeing as how it's not one which can run for a long time (the 1 year deadline in the story hinders it's ability for a 5+ year run).

39. Goddamn! I loved this chapter.

It may be because I'm of the opinion that Onodera deserves more opportunities for romantic development or because I still find Onodera and Raku's communication to be endearing but that still doesn't change how good this chapter was.

Both Onodera and Raku's reluctance to act is quite cute, however Raku really stepped up his game in this chapter. Now that he's acquired Onodera's number, I can only wait until the love triangle/square/pentagon (whatever you want yo call it) becomes more complex.

Onodera still comes of as shy which is part of her charm and I don't really want to see her change that part of her. Still, if push comes to shove I'd like to think she'd fight for Raku and even though she was satisfied with him taking the lead, she should do so herself sometime (take Ruri-chan's advice!) 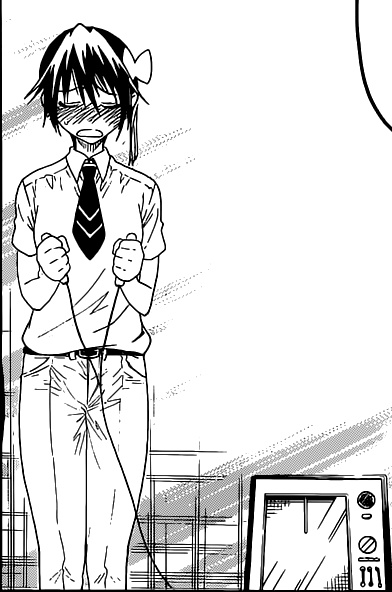 Throwing in a lie detector to complicate things was an interesting choice and this being Tsugumi's chapter made sense as well. Just like the chapter when she got confessed to, she's more suited for dispersed appearances which progress her romance and of course this has to be done with an abundance of humour.

This chapter is a good reminder that Tsugumi brings the most outrageous comedy out of all the girls because she's conflicted with being in love with her "master's" "boyfriend." Even the contents of this chapter which brought about all the laughs was ridiculous; to the point where Shu's facial expression made him resemble one of the guys from Daily Lives of High School Boys.

And at the end, just when you thought Tsugumi was going to be true to herself, she manages to find another excuse. Frustrating Maybe, but I don't mind her still being conflicted because it always adds that little extra comedy to the series.

Worst Chapter - Fairy Tail because it was pure fan service.