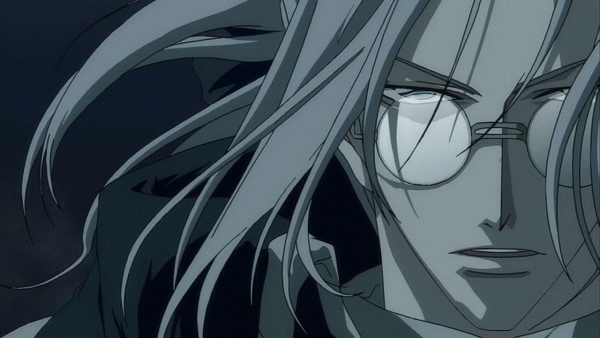 Trinity Blood was originally a set of novels written by Sunao Yoshida and serialized in The Sneaker . Sadly in July 15, 2004 Sunao Yoshida died, this left the novels in a difficult situation. The novels are now being continued by Kentaro Yasui, the friend of Sunao Yoshida. But Kentaro Yasui has yet to release a new volume of the light novel series. The latest release was on December 28, 2004 and was titled Apocalypse Now ( Apokaripusu Nau) which is a volume of the Rage Against The Moons set. The story has yet to be completed, and whether it will be completed is a question mark still.The story is set 900 years after a war of apocolypse (meaning: the end of the world), between the humans and vampires. Abel Nightroad, who is the antagonist is on the site of the Vatican, and also a Cruznik which is a vampire that feeds on the blood of other vampires. There are two sides, the Vatican which represents the humans, and the Empire which represents the vampires. Both sides seek peace, but an organization of radical people (mainly vampires) do not want both sides to join hands in peace.

There are many differences between the novels, manga and the anime. Mainly the differences are of order, all of the 3 different adaptations have different orders in which things happen aswell as the artwork being different. The anime ends early, and the manga goes past the anime. But since the novels are incomplete, Trinity Blood is still incomplete.