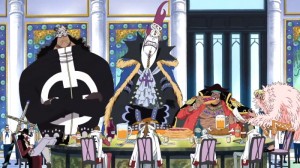 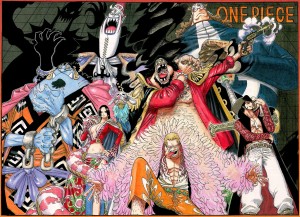 So having already discussed who the next Fleet Admiral is likely to be, I thought it was only appropriate to do a piece on who could become the next Shichibukai. If you don't read the manga don't worry there is no spoilers here as us manga readers have yet to discover anything regarding this topic and at the current state of the anime everyone knows that 3 of the Shichibukai have resigned (well in Gekko Moriah's case forced to resign) so that opens up the discussion as to who can replace them

For starters my money is on Buggy! I know seems unlikely but not as outlandish as you think. First of all since Buggy's past has been brought to the marine's attention he has garnered a heightened reputation amongst many pirates who don't actually know about his cowardice so he has the intimidation required to do so. Then we have to consider additional reputation gained from "being responsible" for the Impel Down break-out and the fact that his newly amassed followers all have high bounty's on their heads puts him further up the list of candidates. Finally, because of his relationship with Shanks and Luffy the World Government may plan to try and use this to their advantage to corner the Red Haired and Straw Hat Pirates. Of course who can also forget the message that was delivered to him by the World Government shortly after the end of the Marineford war (where he proved to be unbeatable against Dracule Mihawk)! We all know he's lucky and I think he's lucky enough to bluff his way into becoming a Shichibukai.

So that leaves two spaces for the position: who can the world government choose

I personally think out of the current pirates it will be one of the 11 Supernova's whose made it into the New World. So if we takeaway Luffy, Zoro, Jewellery Bonney and Trafalgar Law that leaves us with X. Drake, Urouge, Scratchmen Apoo, Killer, Eustass Kidd and Basil Hawkins. I can almost guarantee that Killer and Kidd won't abandon their goal of obtaining the One Piece and would probably make one of the best future rivals for Luffy so we won't count them. X. Drake is a former marine so he's an unlikely candidate to be considered and would probably not accept because of his relationship with the World Government and ambition rivaling Kidd's and Luffy's. And then there were 3: Hawkins, Apoo and Urouge, so if I had to choose it would probably be Hawkins. If we think about it, he has a high enough bounty to be considered plus has already taken over an island in the New World so the government might consider it more of a necessity than a choice.

And the final spot I'll leave this to all your imaginations but here is where it gets harderst to choose as none of the other Supernova's seem adequate. Gun to my head I reckon it'll be someone new (or rather I'm hoping it will be someone new) because as much as I have enjoyed all the characters, I can't see any of them as a new Shichibukai!

One thing I also haven't forgotten is Donflamingo threatening to abandon his post if he were to recieve any orders and Hancock's status is yet to be confirmed. So it could end up being 5 new shichibukai, however unlikely that would since it would cheapen the position even more than it already has been.