We have a few additions to this monthly manga review this time round: Half & Half by Kouji Seo of Suzuka and Kimi no Iru Machi fame and Big Order by Sakae Esuno of Mirai Nikki fame.

Just a reminder that CLAMP have put Gate 7 on hiatus until November. Also I've decided to put Kaichou wa Maid-sama! on indefinite hold. Let's get to it: 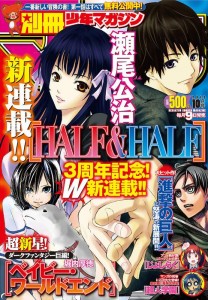 Whenever Kouji Seo has a new manga out, it's worth checking out. Sure my experience tells me that eventually I'll start to resent both him (for what he's writing) and myself (for still continuing to read his series) but I figured if it's the beginning it'll be good. I may have been wrong....

We're immediately introduced to our male and female lead: Nagakawa Shinichi and Sanada Yuuki. Funnily enough they are the only two characters in this entire story. Of course this meeting had to happen in a ridiculous way, and that happened to be Yuuki trying to commit suicide. Unfortunately for Shinichi she succeeds but also ends up taking him with her, and to make matters worse a voice tells them that in 7 days time only one of them will live. Here's the kicker: they have to decide.

The idea of the story is quite good. Being bound to someone by fate and the need to stay close to them at all times reminded me a little of Double Arts but the execution was not all that impressive. With the ecchi being on full blast and...umm...certain choices (one scene involving tissues to be exact) with the plot being a little too immature and downright disturbing, the series almost lost from the get-go. 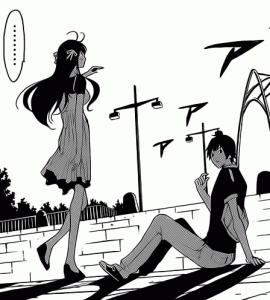 Given that this manga is running in Bessatsu Shonen Magazine, which I find to be a better publication than its weekly counterpart, I was expecting a slightly darker and different tone. Don't forget this is the magazine which has Shingeki no Kyojin and Sankarea in its line-up, so my expectations were higher than usual. Alas the magazine cannot make up for what the author lacks.

I will say that I liked the idea of a 1 week time limit and the possibility of being screwed over at any given moment by the person closest to you (literally), gives this series potential to be enjoyable and probably short. There's also the character designs which I find better than the ones from Seo-sensei's previous works. They're still signature Kouji Seo but the male lead looks more manly.

Just because of this, I'm willing to stick with the series for a little while longer.

Final Note: This was actually Kouji Seo's debut piece. It was originally a one-shot that was published back in 1997 and it's been altered to run as a new series. 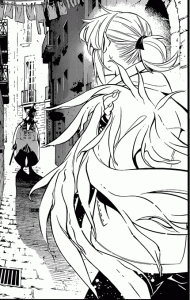 After taking it slow for quite some time, I'm finally happy to see D.Gray-man pick up the pace and give us the readers some long overdue quality action scenes.

Kanda's fight scene with Apocryphos was well paced and reminded me how some of the action in D.Gray-man is very much to my liking. The lack of text also made it possible to focus more on the action, and gave the fight an overall increase in intensity and quality. That did mean there was a trade-off and the rest of the chapter felt short but when compared to last chapter's wordiness.

Of course the action wasn't the only thing going on for this chapter, there were some plot twists as well. I think it's about time the Millenium Earl appeared, considering how little we've seen of him throughout the whole series and how much Allen has progressed. It does annoy me a little that after all that chasing after Allen, it's possible that Kanda and the other exorcists will have to embark upon yet another search journey for him.

The biggest shock of the chapter however came right at the end when Timpcampy was destroyed. Funnily enough, Tim's often forgotten about for no good reason but in reality he's pretty important to the story. As a mascot character he carries a lot of importance, especially as he's currently the last remaining link to Cross Marian who's been MIA for quite a while now. Something tells me Timcampy isn't gone for long and might be back if Johnny has something to do with it.

The stage is set and now it's time for D.Gray-man to get to a part of the story we've been hearing about for a long time. 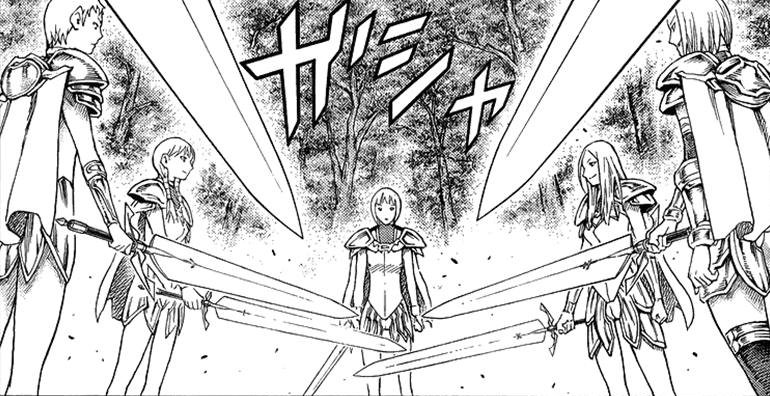 It feels like Claymore is rushing and that's a pity because it could do so much better.

A rushed reunion mixed with numerous hints about the possible end of Claymore being not too far off certainly didn't make me happy about this chapter. I'm not annoyed that Claymore is hinting towards an end being near but I am irked by the rushed feeling I'm getting from the series.

A reunion after such a long time for Clare and Rakki as well as Clare and her fellow claymores should have been handled with more care and given more attention. In fact it would have been fine to dedicate this entire chapter to the reunion, which I've personally awaiting but to just speed things up and miss out a very important part of the story.

The build-up to this chapter and the choice of dialogue makes me think that Claymore is really entering its final battle". If that wasn't enough to convince me, all the Claymores putting their swords together after not having done so for a while, has me almost certain. Let's hope the conclusion to the series doesn't feel as rushed as this particular chapter. 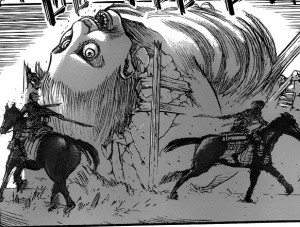 I think I've been too nice to this series, so I'm going to be a little harsher with my review. .........can't do it, it's still one of the best series out there.

With the plethora of themes that Shingeki no Kyojin has already covered, I didn't think there could be anything left but as usual the series brings up another very relevant and important point about human survival and does so with fantastic writing style and just the right amount of art.

Man's greed knows no limits and even times of distress and dire survival there will always be a few men who wish to look out for themselves and not their fellow-man. This was conveyed very well and the fact that it was the religious organization's fault only added to my enjoyment; I tend to enjoy plots that criticise the self-interest that morally upstanding organisations tend to hide away. Even without the priest revealing anything more than he already has, he came off as a pretty deplorable man.

With not much else revealed, the plot thickens and now there is more for Shingeki no Kyojin to explore and possibly bring altogether as a mystery. I'm quite excited about the mystery the series has created, which allows it to diversify and keep us interested.

Speaking of mystery, the end of the chapter brought about even more of that with the discovery of a infant titan. Presumably the baton has been passed onto Connie now and he'll have his own mini-arc, another great use of the extensive cast of characters in this series. 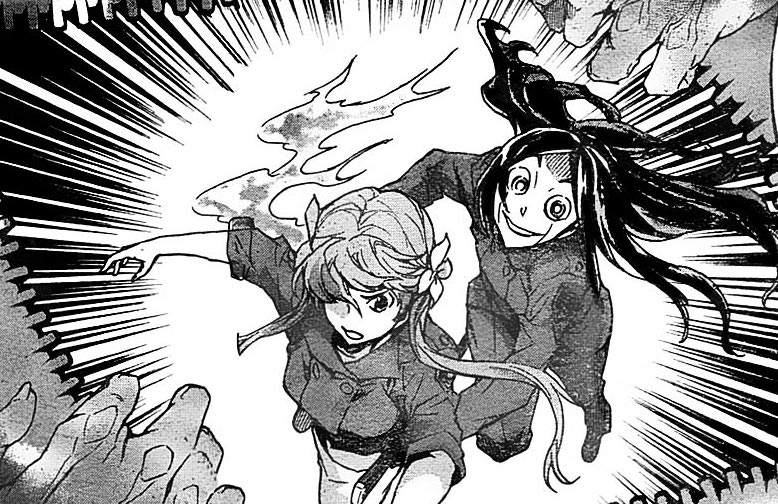 Big Order thus far has been a series of mixed quality. The series has a great idea and is just as violent as bloody as the author's first work but a little voice inside my head keeps telling me to expect something more from the series.

Now that Eiji has managed to avert the crisis, I'm interested to see how the story develops. Clearly a lot of the current focus is on the organisation and with the numerous reminders about all the betrayal going on, it's hard not to think about the internal state of affairs of this group.

The conclusion of the arc was pretty bog-standard and there wasn't much excitement. Even with the addition of a new female assassin to the cast, I didn't really have any strong feelings or reactions. Probably the most exciting point in this chapter was Rin's sudden appearance through the big gaping hole in the sky. 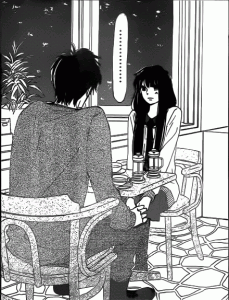 After arguably the most important development in the entire series, Kazehaya continues to impress as the male lead.

With this chapter, he grows closer to being that ideal boyfriend all the girls want. This happened when he sat down with Sawako and proceeded to explain how he was scared he couldn't hold himself back and all he wanted to do was to keep her purity....blah blah blah...yes it's all nice. While I can't actually sympathise with the guy, my liking of him is back where it was when the series started.

Not only has the issue been resolved but Kazehaya and Sawako are finally communicating! The issue between them has been present for a while now so unknowingly I've built up a little frustration but even I have to admit this chapter certainly made me feel better.

Just to be clear, not much actually happened but that's how it usually goes with each chapter of Kimi ni Todoke. It looks like the main couple are getting closer together, which should make for a nice few chapters.