This monthly manga review should have been posted sooner because quite frankly there weren't many chapters this month. CLAMP's hiatus means no new Gate 7, D.Gray-man is also on break and I put Maid-sama! on hold for the time being.

On the plus side, I'll be reviewing the chapter of Ao no Exorcist that didn't make the September review because it was scanlated really late. Let's start with those two chapters:

The new arc has begun and it's back to the main storyline. I can't help but be a little excited about the upcoming arc(s) because these chapters provide some solid groundwork for the future chapters of Ao no Exorcist.

Chapter 38 did a good job in the set up of what could possibly be the final saga and didn't reveal too much about what's going. Rin's involvement was purely for some much overdue character development coming from a new friendship outside of the group of exorcists. It was only a matter of time before this happened and its nice to see Rin finally branching out outside of his usual group of friends. It also happens to work because of the lack of awareness on his part which builds up for the next chapter rather nicely.

I also quite like how Arthur Angel was reintroduced. His first appearance didn't do a good job in making him memorable and afterwards it was almost like he disappeared from the world of Ao no Exorcist. There is a lot of mystery surrounding this new arc so it did make him appear less important in the end, but if he's involved from now on he could turn out to be a central character.

Moving onto chapter 39, it makes sense in an odd way.

It's been obvious since the beginning of the series that Mephisto is a demon. - No ! Just me - and now we know his true identity. Not intended as a plot twist, he is revealed to be the second in command out of the 8 Demon Kings and is appropriately named Samael. Just by reading the wikipedia entry, you can tell that this name was chosen after some research and fits Mephisto's character perfectly. If you're too lazy to read it, then the basics is that Samael was an archangel thought to be both good and evil.

Mephisto still shrouds himself in mystery, making it hard to predict if he'll help the human world in the end or if he's plotting a coup d'etat himself. This has been his MO for a while and eventually it became a selling point of the series. Notice how just by revealing the bare minimum in terms of information, Mephisto is still the most interesting character.

All the talk about Demon Kings makes me wonder when we'll get to meet them. Kind of like how One Piece talked about the shichibukai early on in the series, now it seems like a matter of time before Rin & Co. will have to face off against all of those demons. If that wasn't any indication, the Gehenna Gate at the end of the chapter felt like a big clue.

Chapters like these are not meant to be discussed buy simply enjoyed.

There isn't much I can say about this chapter, except that it gives all fans of fantasy action series joy to read and then re-read. As you might guess, content wise there is very little and the ending is the most eventful part of the chapter.

Action-wise, it's the same Claymore we know and love. It's not just Clare kicking ass but also her fellow sisters in arms and that in itself is enough to keep me satisfied. With plenty of text-less panels spread out throughout the chapter, it's impossible to view this chapter as anything but a favour to all of us fans who have missed all that crazy action.

Don't really know what to say about the ending, so I'll leave that up to your imaginations. Rakki being approached by male claymores is a mystery and hard to predict. 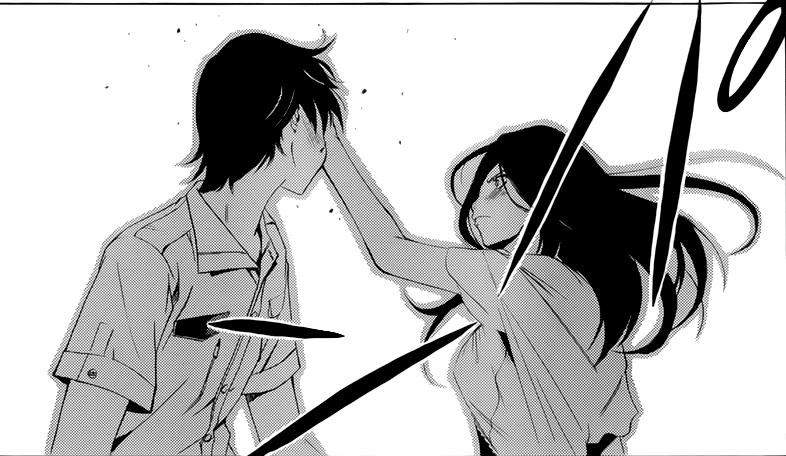 In that whole space of time between the first chapter and the second, I took the time to read the original one-shot that came out in the mid-90's. Considering the first chapter was weak, I was about to call this a failure in comparison to the one-shot but this chapter managed to improve the situation.

The original one-shot of the series had more innocence to it, which for me is the foundation of any good shonen romance series. Of course in the case of this serialised version, I wasn't expecting the same kind of innocence that Seo-sensei might have favoured way back when.

Introducing a girlfriend into the situation is definitely a new take for the series and one that works. It's a little obvious, a little clich and a little too predictable but it at least manages to give us a catalyst for prompt romantic developments should the need for that arise. The girlfriend doesn't actually get much panel time so she may be forgotten already, although a part of me is glad that there isn't so much focus on her from the start.

With that being the only new thing that we learnt, the rest of the chapter concentrated on the two affected. The tension between them is mounting and that works well with all the angry emotions being harboured by both parties. Ultimately, the series so far has been about two people trying to best each other in order to live and that's being continued in this episode much to my liking.

No much going on here, although this turned out to be a good chapter.

It's a little hard to predict if Shingeki no Kyojin is entering a big arc in the next chapter or so, but at least the build up has been nothing short of fantastic.

With such a big cast of characters, it is hard to keep track of who they are as well as to remember details about them. In some cases, like this chapter, we don't know anything about the characters at all and this makes it even more difficult to keep track of what is happening. Luckily we're slowly learning about all the secondary characters and hopefully by the time another major development happens, all will be more clear.

For plot progression, this chapter was a little low-key until we got to the part where Ymir read the canned food. With the mystery about the titans hanging around the story, it is adding to the suspense and interest I have in the series. I did think there would be more humans with titan abilities and it feels like we're leading up to the revelation which has been started by the second appearance of the ape-like titan with communication skills.

Good chapter overall and I'm excited about what's to come.