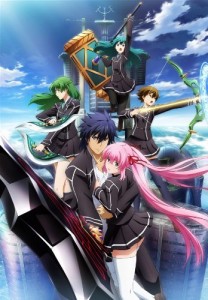 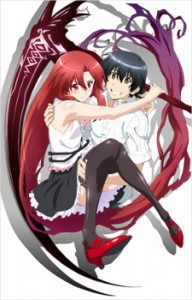 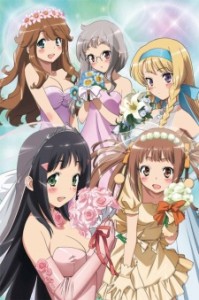 I've decided to group together all the anime of the season which I've immediately dropped after the first episode. This list doesn't include Uta Koi and Kingdom for which I've already given my first impressions.

Before the start of the season I thought this series was going to resemble a Sword Art Online like series but after it's first episode I can say that it's far worse. The story isn't to my liking but what really put me off was the excessive fan service and the lack of clear explanations about the powers of the characters and the overall setting of the series.

To make things worse, the "rogue hero" of the series is one of the least likeable douchebag characters this season who is clearly going to end up having some type of harem whether its an intentional part of the story or not.

When you add that to a rather unimpressive animation and soundtrack combo, the series automatically disqualified itself from my watch list this season.

It's not like I was expecting all that much from this series and closer to the release date when I saw the previews I was expecting even less from it. With a disturbing setting for a school harem/romance and generic plot developments, this series almost immediately didn't make my watch list and made me wonder how I managed to sit through the entire first episode without stopping halfway through.

The only time I laughed or remotely enjoyed the first episode was when the main characters mother told him the reason he's getting an apartment and not living in halls is to allow for his romantic relationship to progress, but that ended up being a one-off and the rest of the episode went along in the boring and uneventful direction that 99% of harem anime tend to go.

All this and the fact that I find the "big brother complex" plot elements to be extremely annoying (even in Hatsukoi Limited where it was just a fraction of the entire story), so to have it be the basis of an entire anime series seems like torture to me.

Feel is a studio that's well known for bringing out light novel/visual novel adaptations for romances/romantic comedies like Da Capo, Mayo Chiki and arguably Papakiki which aired in the Winter season, so they always have a "hit or miss" effect with me and this one falls into the "miss" category of their anime.

I also dropped Oda Nobuna no Yabou and Muv-Luv Alternative: Total Eclipse after skimming them and confirming that they are not series I'd enjoy.