Just woke up this morning and decided to update My Anime List when I saw it there first. Moments later, the ANN news post shows up on my twitter feed. Although ANN reported that Kodansha's website listed the anime for a brief moment and then took it down, its likely that the December issue of Bessatsu Shonen Magazine (out on the 8th) should/could confirm it.

Hajime Isayama's super popular, Manga Taisho nominated, 300,000 opening week selling manga was due for an anime some time. Incidentally, the Spring 2013 season is also when fellow Bessatsu Shonen manga Aku no Hana's anime is listed for. This means the anime will air before the live action movie which was announced a while back.

My love for Shingeki no Kyojin is unlimited at this point. Though it only has 40 chapters out (by next issue), it's performance this year was close to flawless. Very thought-provoking, great tension and intensity have led Shingeki no Kyojin to the top of the shonen manga field in my opinion.

My only concern is that it is too early. Unfortunately, an announcement this early can either mean a short adaptation or possibly a longer adaptation with an original story part way. No studio or cast information as you might have guessed, so for the time being I'll be jumping for joy. Once that stops, I'll be praying for a great studio and director-writer combo to do this series justice. 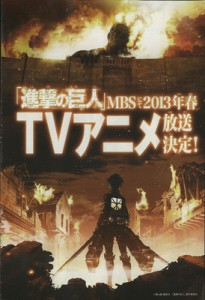 Shingeki no Kyojin gets an anime!! No news could top this. Best news of the year.

UPDATE: The next issue of Bessatsu Shonen Magazine will confirm a few of the voice actors as well as the staff. It also confirmed that the Project Attack was indeed this anime adaptation. [Source]

The anime will be handled by the director Tetsuro Araki (DEATH NOTE) and writer Yasuko Kobayashi (Shakugan no Shana, Claymore JoJo's Bizarre Adventure) at Wit Studio in cooperation with Production I.G. Wit is a newly formed studio owned in part by IG Port and a few other entities, essentially making it a subsidiary of IG.

The project is definitely looking bigger. Essentially it's a Production I.G anime, which means the animation will be amazing. Especially given the popularity of the manga, which could mean a bigger budget altogether.

Hype is building. The whole Project Attack thing was a nice touch.