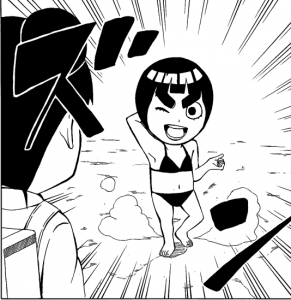 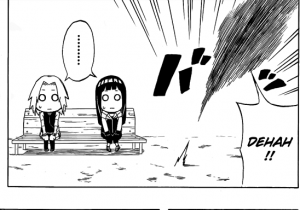 Many of you might not have heard of this manga and for those of you have heard of it but not read it you might have thought what the hell is it Well the latter was my initial reaction when I somehow stumbled upon it. Before all you Naruto fans get over-excited you need to know that even though this manga uses a lot of the original characters from Naruto, it is in fact not a work done by the man responsible for Naruto but rather a gag/comedy manga drawn in a chibi style by Kenji Taira. So would I recommend this Absolutely! And here's why:

There's only one real reason to read this manga; it is hilarious! I mean the jokes are childish but if you're looking for a quick laugh you should be able to appreciate this manga if you love the antics of Rock Lee. So if you're already convinced that you wan't to read it, stop reading here and go get your hands on a copy but if you want to know more the next part is a review of the first 5 chapters.

Chapter 1: We're introduced (re-introduced if you read Naruto) to Rock Lee; a Konoha ninja who is unable to use ninjutsu but still dreams of becoming a great ninja. He becomes disheartened when he thinks his sensei (Maito Gai) expects a great ninja to be able to use ninjutsu, so he enlists his team-mates Neji and Tenten to try and fool his sensei. He succeeds at fooling Guy into believing that he has mastered ninjutsu, but when Gai finds out why he "mastered" ninjutsu he punches Lee and explains to him why it doesn't matter if he knows ninjutsu or not.

Chapter 2: Lee, having been rejected by Sakura, finds a copy of Kakashi sensei's "Make Out Tactics" and believes that by using it he can succeed with Sakura. The plan obviously fails miserably with Lee constantly injuring her! This sends him into a depression mode until Kakashi shows up with news of a rogue ninja close to the village and sets Lee straight about what it means to be cool. Lee then rushes over to save Sakura, who was captured by the rogue ninja and actually succeeds in looking cool until he makes another stupid mistake.

Chapter 3: Lee defeats a group of enemy ninja, only to see Neji defeat the boss. Later on he challenges Neji because he feels inadequate and Neji accepts to battle Lee in one week. So one week passes and Lee arrives having literally doubled his body from an extreme workout but he has lost his speed and this leads to a comedic fight between the two.

Chapter 4: After seeing Gai being beaten by Kakashi with a move called "A Thousand Years of Pain," Lee tries to learn it. On top of this he tries to now imitate Kakashi because he thinks Gai has lost 20 consecutive fights to him. So Lee, now dressed like Kakashi even down to a Sharingan contact, attempts to take out a group of rogue ninja with "A Thousand Years of Pain" but fails and needs to be rescued by Gai.

Chapter 5: The ninja of Konoha make their way to the beach where Lee is determined to see Sakura in her bikini! During a "training" exercise with Gai, he finds a pair of trunks believing it belongs to Sakura but he soon finds out that it's Gai pair and they fell of during the exercise which obviously doesn't sit too well with Sakura. But will Lee ever see her in a bikini

The review doesn't do the manga justice but hopefully gives you a good idea about what it's about. The jokes make use of Naruto references but even if you haven't read or watched Naruto you would still find it funny! The manga is so short that you could probably read all the chapters (including the special) in 15-30 minutes and is a great little addition to anything Naruto based.