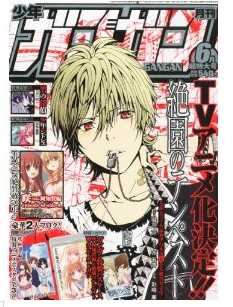 This time round it's a bit of short news blasts, some information revealed regarding upcoming anime projects and a review of the Biglobe anime poll. First off:

1. Tiger and Bunny's 2nd anime film is scheduled to be released sometime in 2013.

3. Mangaka-san to Assistant-san, the manga running in Shonen Gangan will end in the July issue.

4. Hajimete no Aku, a manga running in Weekly Shonen Sunday will end in Issue 25, about 2 weeks from now.

5. Claymore has not ended and will appear in the June issue of Jump SQ. Seems like an error was made.

6. The editor for Nyaruko san has revealed that 1 million copies of the novel have been sold.

8. Bleach will have 2 novels released on June 4th entitled "Spirits Are Forever With You 1 & 2"

9. Deadman Wonderland, the manga, has been put on indefinite hiatus because the illustrator is taking pregnancy leave.

Now for a few detail revealed about upcoming anime:

This ANN post has revealed quite a few details about the sequel including:

Just at a quick glance, I see that the new cast are for the role of the characters from England and there are quite a few of them.

Another post from ANN, has revealed more about the elusive anime project K which was announced by King Records' Starchild Label. Starchild is a heavyweight when it comes to music production in anime having been involved with any number of projects.

The post revealed the characters and the cast who will be voicing them. The cast is impressive, boasting the likes of Daisuke Namikawa, Tomokazu Sugita, Daisuke Ono, Mamoru Miyano just to name a few.

The projects plot still remains unknown but it's shaping up to be a force to be reckoned with,

NOTE: I've been recently informed these polls aren't the best source for gauging popularity but I'm including it in the post anyways. Total number of votes was 11,698 and here are the top 36 choices.

-Hyouka's result is a little surprising, I'm surprised it beat out Fate/zero and Accel World's rank is also surprising.

-I'm glad to see Sankarea where it is, since it's the romance I'm currently enjoying most this season.

-Sakamichi no Apollon and Uchuu Kyoudai ranked well but I'm surprised they were beaten by Haiyore! Nyaruko-san.

-I'm a little disappointed with Zetman's ranking considering there are a few anime above it which I find to be inferior.