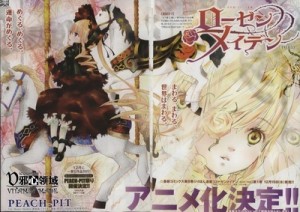 Been a while since I posted about manga and anime news. Here's some recent stuff: