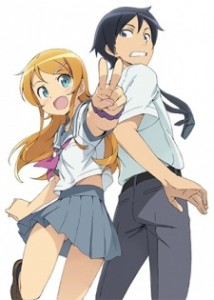 One of the up and comers in the world of animation, White Fox have announced their anime adaptation of the novel Hataraku Maou-sama!. The anime is due to air in 2013 and will be White Fox's second time adapting a light novel. [Source]

The sequel to Ore no Imouto ga Konnani Kawaii Wake ga Nai has been confirmed for the Spring 2013 anime season. Animation production will switch over to A-1 Pictures (from AIC Build). [Source]

I mentioned that there was talks of an anime for this manga not too long ago, and it looks like they are impatient to get this out there. Another manga being rush adapted with only one volume available for purchase and only 1 year of serialization thus far. Dogakobo and Orange are co-producing, and the manga is by the author of GetBackers. [Source]