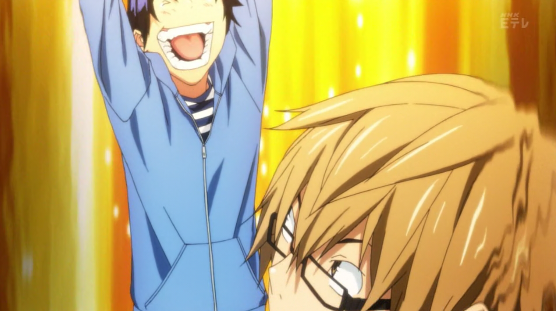 Well it's another random post about my strange thoughts, ideas and what have you. Actually this post is a little special and if you want to know why, keep reading.

As of the previous post, Anime Aura has accumulated 300 posts and incidentally we recently passed the 300 comments milestone!

Oddly enough this happened to happen not long after my 1 year mark with Anime Aura, so I'm really pleased and would like to thank everyone who visits and takes the time to comment on my posts. Pay no attention to the Intense Debate comment counter on the right-hand sidebar because it's excluded a few comments from when we're still using our old theme.

I know that probably half of the comments on the site are mine but what the hell!

I'm a little frustrated...no that's not right, I'm torn. I still don't know how many series I want to blog this upcoming season but the list could be potentially huge.

I choose series to blog episodically based on what I think I'll love or what has potential to be great which unfortunately means my choice is especially hard this season. After struggling a little, I figured it was time to put my foot down and decide on the guaranteed series to be blogged and the maybes that will only happen if I find the time.

First off the series guaranteed to be blogged:

Bakuman 3 (airs Saturdays): I may not have blogged the first 2 seasons - season one because I hadn't started blogging yet and season 2 because I don't tend to blog manga adaptations of ongoing works which I read - but because the manga is finished, I don't know what J.C Staff actually plans to do with the series. That and I haven't touched the manga since it ended back in February, so I want to reminisce through blogging it.

Jormungand 2 Perfect Order (airs Tuesdays): I did blog the first season and I refuse to stop just as the story is becoming more continuous. Incidentally, the scans for the manga stopped halfway through what I think comprises season 2, so I don't actually know what will happen after a few episodes. Really excited to get my dose of Koko Hekmatyar!

JoJo's Bizarre Adventure the ANIMATION (airs Fridays): Maybe because I feel this series won't get the praise it could deserve and because many might not watch it simply because it's more niche nowadays but I want to see what David Productions can do with Part 1: Phantom Blood. I haven't seen the Phantom Blood movie, but I went over the manga not too long ago to refresh my memory. I might even watch the movie to see what that was like in order to give myself more perspective and material for the posts.

PSYCHO-PASS (airs Thursdays): My noitaminA blogging choice for the Fall 2012 season goes to the original work written by Urobuchi-sensei. Urobuchi, Akira Amano and this being 22 episodes long makes it a potential monster hit or a second coming of Guilty Crown, but more than that it interests me more than Robotics; Notes. This will also be the first 2-cour I plan to complete episodically (I handed off Sword Art Online to racoons and ShonenBeat).

Shin Sekai Yori (airs Fridays): Now this series gives me the chills in the best possible way. It's sci-fi but dark, it's an apocalyptic tale but with children as the main cast. That combined with the amazing previews are enough to convince me that this is this seasons dark horse and most under-hyped contender for top anime.

Now we have the maybes i.e. I'm still on the fence and will have to decide on a later date.

BTOOOM! (airs Thursdays): Say what you will about it's synopsis and setting, there could be something here and since this is an action series with Madhouse behind it I'm inclined to give it a shot as a wildcard for the season. I don't know why I'm a little confident with this series but it could be a very action series to watch.

Code: Breaker (airs Saturdays): Admittedly the only manga adaptation I'm nowhere near up-to-date on but I don't know how long it will last. My guess is 2-cour at the least but the possibility of this being multi-cour is high and with plenty of source material to back it up (give or take 190 chapters).

K (airs Thursdays): Another addition to Thursday's blog backlog is a double-edged sword. K looks like it can dominate the competition but being an original work and not to mention one I don't know the full synopsis for, makes it harder to predict it's quality.

Robotics; Notes (airs Thursdays): I'm not familiar with the source material, nor am I great at blogging slice-of-life series. There is potential but at the same time this is the least popular of the 5pb. visual novels.

Tonari no Kaibutsu-kun (airs Mondays): This is a series for which I ended up reading the available chapter the manga and can foresee where the anime will end. I like how it airs on Mondays, since there isn't much else of interest for me on that day, and for that reason I may make the effort to blog it.

Zetsuen no Tempest (airs Thursdays): You might have noticed that almost all the series on the maybe list (all but one) and that's another reason I'm not sure if I want/can blog them all. My issue with Zetsuen no Tempest is that it'll take a little bit to get the story going and even then BONES' shonen manga adaptations tend to be on the long side (multi-cour 50+ episodes), which I don't think I could commit to.

And finally the stuff that's unlikely to get blogged, even though I'll be watching.

Chuunibyou demo Koi ga Shitai! (airs Wednesday): Despite being the only series I want to watch on a Wednesday, I'm always reluctant to blog slice-of-life series. Chuunibyou falls into the typical KyoAni category which for me isn't all that interesting to blog about.

Little Busters! (airs Saturdays): Everyone is jumping up and down for this Key VN adaptation, but I'm mainly watching out of curiosity. I haven't even attempted to play the VN so I don't think my interest will be enough to blog the series.

Magi (airs Sundays): I'm up to date with the available scans, so I'll now how the story will progress. When I also consider that my Sunday is usually used to compile the Weekly Shonen Jump Issue Reviews and the Weekly Manga Recaps, I feel even less inclined to blog.

Note: Anything not on these lists are series I'm not sure I'll be watching.