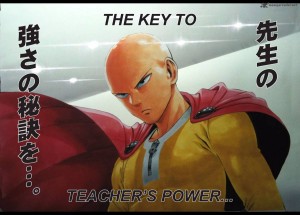 The chapters keep getting shorter and shorter. Well here goes.

Since I am eager to post about the latest chapter, here is a summary of what happens. Saitama gets attacked by the Paradise Group, and things get weird. He defeats the strongest guy in the group with one punch, as usual. Then Genos notices a cyborg and questions him regarding his mortal cyborg enemy, however it ends with a dead-end. Genos joined Saitama to train to become stronger and defeat this mortal cyborg enemy of his, but we barely know much about him. I wonder if there is a connection between this enemy of his and Saitama, also we don't hear much about Saiatama's family either.

Saitama then defeats the strongest person in Z city with one punch, but gets no recognition for it. He then infiltrates the Paradise Groups laboratory and fights the ultimate creation of the mad scientist. The scientist seems extremely weird and it wasn't clear if he was actually still alive because of all the clones he had of himself. He didn't seem to have a clear plan on how to achieve human evolution. The so-called "ultimate" creature gets easily defeated by Saitama in one punch! This shocks the scientist by seeing a normal human defeat his strongest creation. Then when Onepunch Man tells them all his secret to his strength Genos won't believe him, and neither does the scientist. How can someone get that strong with pure physical training? I wonder if Genos became a cyborg to become stronger or whether he was injured in someway before and forced into being a cyborg.

Onepunch Man, Saitama, then complains about never being mentioned on the news and Genos tells him that he'd have to be part of the Hero Association to be mentioned! So they go and get registered and the funniest bit is how Genos gets S rank and Saitama who is clearly much stronger than him gets a C. I wonder if he will get more recognition now, I doubt it though.

There is a peculiar ninja who attacks Saitama, and gets easily defeated by him. And the arc is over.

I have to admit the series is interesting but the whole Onepunch Man concept is getting a bit over kill. I would be interested in seeing more battles where people with higher agility and speed come into play, resulting in Saitama being unable to land his one-shot death punch!