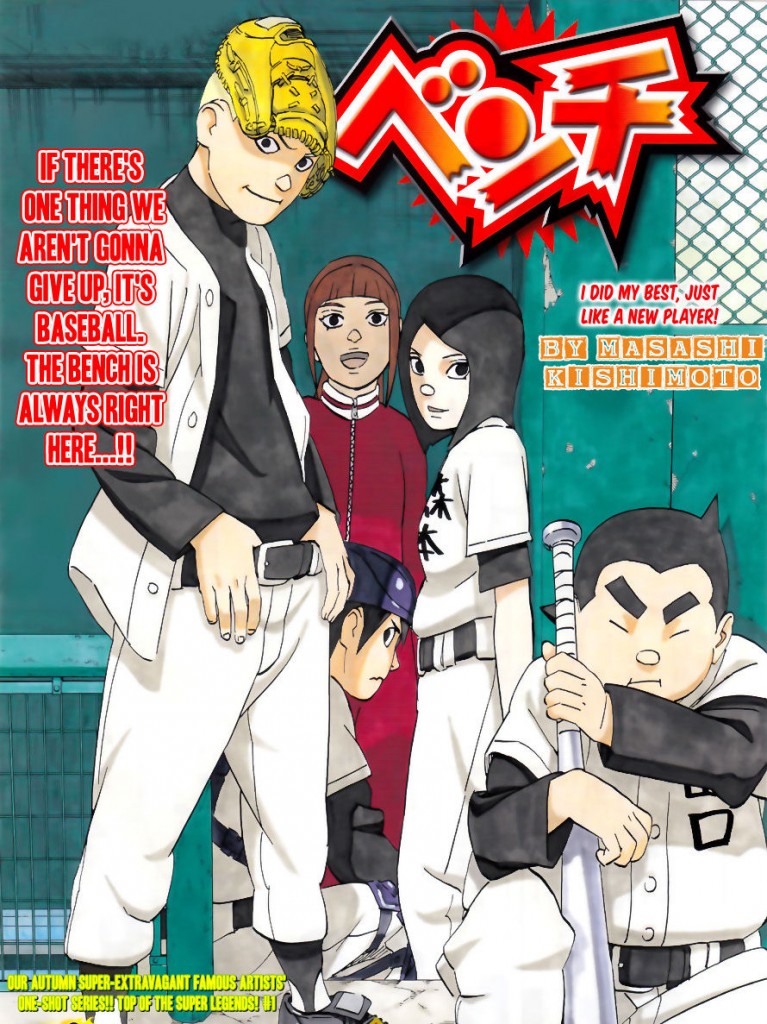 So I remember reading this a while ago because it's a work done by Masashi Kishimoto (author of Naruto) and now I thought I'd review it since it's possible that this will end up being a regular addition to Weekly Shounen Jump or some other major manga publication. For all you Kishimoto fans, this 48 page one shot is about baseball.

The Plot: It's baseball season and everyone kid who plays is ranked and placed in the team according to their skills. Yamaguchi Tsutomu is a new 8th grade transfer student who is placed in the D Team in his baseball club with Ou, a former A Team injured pitcher, but unbeknownst to the coaches and everyone else in the club Tsutomu used to be a member of the best Japanese baseball club for his age group. After butting heads with the A Team pitcher and best hitter, a challenge is laid down by the duo in order to prove that anyone who loves baseball can make it as a professional, but this poses a problem for Ou who is unable to seriously pitch due to his shoulder injury and Tsutomu is overweight, slow and has lost the ability to hit since the 6th grade.

But we soon discover that Tsutomu's ability to hit has been impaired due to his eyesight so once the problem is fixed, the duo take on the challenge and manage to beat the A Team pitcher and number 4 batter (best batter on the team) although Ou pitches with his injured arm and causes more damage to it. At the end there's nothing left but to tell the losers to try harder!

What do I think : I really want this to get serialised! The drawings are well done and to be honest there aren't many big sports manga's out there currently, however the probability of it getting picked up is much less. You see baseball in Japan is almost as popular if not more-so than baseball in the USA, so if this were to get picked up it would either do really well or could fail miserably, but because I can see Naruto coming to an end in the not too distant future (by that I mean less than 5 years easily) Kishimoto could work on making this a great manga. Though the plot may seem overused, the characters are definitely likeable and this manga has promise if it were to be picked up!