Oh yeah! Since the last chapter I have been dying to read this one since it involves Big Mam; another one of the Yonko! Not only does this chapter introduce more characters, it also progresses the story to the point where the Straw Hat's will soon be leaving Fishman Island and entering the New World!

Pretty awesome Boxing Day to just wake up and find out that a new chapter has been released!

The monster trio are out and about searching for Caribou since he stole all the treasure (which will become theirs since Neptune was so generous). So they find Caribou, knock him out cold, steal all the treasure that he was hiding inside of himself and make their way back to the palace. On their way to the palace, they encounter a group of fishmen outside of the factory having a slight dispute with a pair of odd creatures.

Well these creatures happen to be Big Mam's messengers and they are there to pick up the 10 tonnes of sweets that she requested otherwise, they warn the island that it will be destroyed by Big Mam's crew. This all happens while Big Mam herself is informed about the happening on Fishman Island, which prompts her to make a call.

Well obviously Big Mam is not pleased that her favourite sweets may not arrive, so she puts in a call to her messengers on the island. The messengers don't want to answer - so naturally Luffy does and the outcome of the conversation is not pretty. To sum up:

1. Luffy takes the blame for no sweets being available for Big Mam and as an apology offers her the treasure they have.

2. Though one of her messengers tries to tell Big Mam that this is a good deal, especially since Eustass Kidd managed to sink a couple of their ships which need to be repaired, Big Mam cares more about her sweets and tells Luffy that all her wrath will be concentrated on him - come to the New World.

3. Luffy accepts and declares that after crushing Big Mam in the New World, he will make Fishman Island his territory.

Another great development in the story, however the thing that I enjoyed most about the chapter was the character designs of Big Mam's crew. Every single one of the characters was drawn in a monster like way, especially Big Mam who was drawn in a Jabba the Hut like manner which was a nice way to depict her greed and personality. 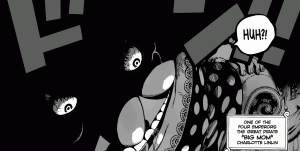 One complaint would be that the 2 messengers that were sent to Fishman Island were lacking in creativity - one was a Lion and another was from the Long Leg Tribe - so not the most original creations for characters but the rest were done very well.

So whatever is in store for us next week should be exciting! Probably not Luffy vs Big Mam but hopefully a meeting between the two.