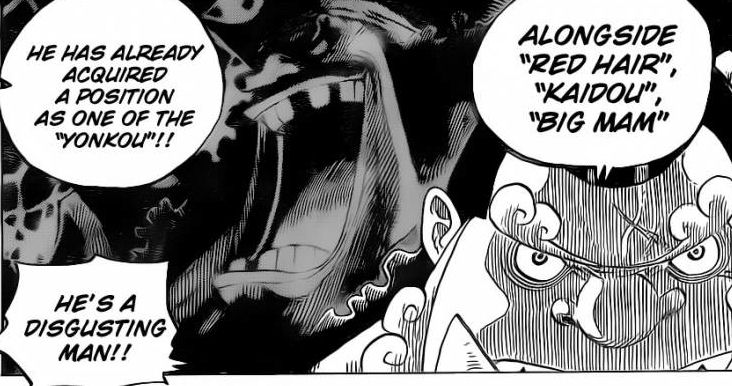 I hate using the abbreviated form of the expression 'Oh My God' but seriously OMG! This weeks chapter is a huge fond of answers to the questions I've been asking myself regarding One Piece ever since reading the chapters straight after the Whitebeard War. Following in Oda's style of expanding a character base and/or adding more information at the conclusion of an arc, this chapter definitely needs to be read as soon as possible!

The chapter first starts off with Robin and Neptune's conversation regarding the 3 ancient weapons, one of which is Shirahoshi (the mermaid princess who used to go by the name of Poseidon). Unfortunately this conversation is overheard by Caribou, who is delighted to hear about such a rare treasure and relishes the opportunity to try and kidnap Shirahoshi. 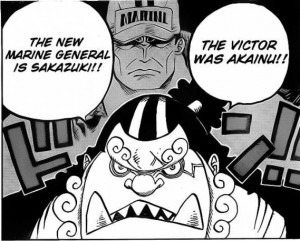 Our focus next turns to Jinbei and the rest of the crew. Jinbei expresses his shock towards Luffy's lack of knowledge and proceeds to fill him in on the major events that had occurred during the 2 year time-skip. I'm just going to quickly sum up what he said:

1. Aokiji duelled Akainu on an island as he was opposed to the idea of serving under him as fleet admiral (Akainu had the government's support i.e. the Gorosei) but lost! He was spared by Akainu but in disgust left the marines. New Fleet Admiral= Akainu.

2. Blackbeard conquered Whitebeard's territories in an instant and didn't even have to use the Gura Gura Fruit he stole from Whitebeard. New Yonko= Blackbeard, but that's not all! His crew is now hunting down pirates with the most powerful Devil Fruit powers in order to steal the fruit's themselves.

Then the rest of the chapter looks at Caribou who is trying to kidnap Shirahoshi but flees when the monster trio arrive, the New Fishman Pirates have all aged to become decrepit old men (the side effect of the pills which were supposedly a "treasure") but the best part was yet to come; Big Mam's messengers have arrived and are waiting to collect the sweets the island owes her!

I'd expect nothing less from Oda! I always loved when he concluded arcs and was slightly more happy about the conclusion of this arc, since it felt drawn out and not very exciting. Finally we have confirmation of who the new Fleet Admiral is and that Blackbeard is in fact a Yonko, but what's made this chapter even better is that it has already set up the introduction of another one of the Yonko! Even better it's one who I suspect is the mother of Lola and someone Luffy said he wants to meet!

Next week's chapter should be interesting for many reasons. First of all, the messengers themselves could be very strong but what I hope more than that is the possibility of the Straw Hats meeting Big Mam. Another thing to consider is that they will now be leaving Fishman Island and entering the New World.

Last thought: I really don't want them to be stuck on Fishman Island any longer!