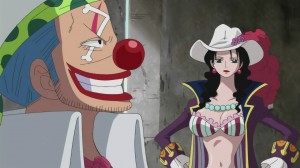 The episode gives a glimpse of the New World, and how some of the rookies are faring in it. One of the new world islands is constantly under a lightning storm and it shows the harshness and difficulty of the new world. It seems that the new world is more of a pirate versus pirate battleground.

News of Luffy being in Marineford is now circling everywhere and all of his crew have received the News Coo newspaper with article where he revisited Marineford with Rayleigh and Jinbei. It seems Luffy was in fact sending a message to all of his crew members, and everyone apart from Zoro understood what the message meant. It's no surprise that Zoro doesn't understand the message because he isn't exactly the smartest member of the Straw Hat pirates. I'm guessing the message has something to do with ringing the bell 18 times, maybe Luffy is doing more than signalling the end of the marines era of control and signalling the beginning of the era of the pirates (as well as signalling the end of White Beards era).

Well, I can't wait to see the upcoming episodes. I expect that there will be more information into the pirates and the perils of the new world.