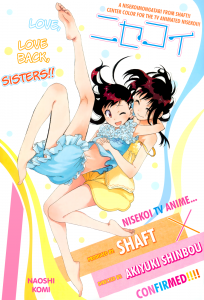 A little while back Nisekoi had its anime announcement.  Something that readers of Shonen Jump weren't surprised about and a number were excited for.  Even I find this to be good news, and was pleased to see Komi Naoshi's romantic comedy get the green light for the small screen.  What came next - studio news and staff announcements - was something out of left field.

Now I'm not saying SHAFT isn't a good studio with a decent resume to back it up, but they weren't the studio I had in mind.  Their style is signature, it's overly artistic to some and what's more they tend to deal with more offbeat source materials.  A good example of that would be their other anime adapted from manga; Arakawa Under the Bridge, Sayonara Zetsubou-sensei etc.

If that wasn't enough, the man heading the direction will be none other than Akiyuki Shinbo.  SHAFT's top dog and a polarising figure in the anime world is going to be putting his creative hands all over Nisekoi, leaving a few like myself confused.  Shinbo has tried his hand at romcom harems before but that was Negima! which ended less than favourably and thus makes this decision all the more unsettling and intriguing.  How will he adapt it? Will it be for the better or worse? Just two of the many questions people should be asking.

With all my reservations and downright confusions over the news, there is something exciting about this pairing.  A manga like Nisekoi would have usually gone to the likes of J.C. Staff or A-1 Pictures, so SHAFT is an out of the box choice.  We may be shocked by it for now, but at least it gives us the element of unpredictability and that in itself has value.  Sure this may fail, but from one point of view it's better than handing it over to another studio that would do nothing interesting with a source material like this one.  A source material that's far from original and has been done many times before.

All that's left is for us to wait and see.  Could be good or it could turn out a disaster.