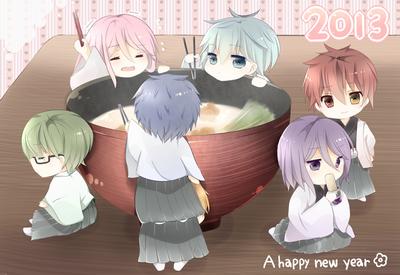 Happy New Year one everyone!

2013 has already started with a bang because of Nekmonogatari: Kuro and by the looks of it, will only get better once we start progressing through the year.

This is just a post about some recent stuff for the site.

Recently I've written a lot of posts about the best anime and manga of 2012 (you might have noticed) because you can't really move onto the new year without reviewing the old one. For those who missed any of these posts, here they are:

Now for some other site news and what not.

Anime Aura - More Popular Than Lichtenstein (According to Jetpack)

It's that time of year where almost all bloggers receive an email from Jetpack about our site performance. This is the first full year that Anime Aura has been active and I'm happy to announce we got more or less 250,000 page views!

I certainly wasn't expecting such a huge statistic for the first year, and I thank all the readers who keep coming back. It's nice to know that there are a good number of you who enjoy reading what I write - even when I don't. This one's for you.

The winter season has already started (more or less) and as some of you may remember, I'm cutting back on episodic blogging. This is mostly to do with me joining Anime Audio Log, where I'll be contributing in a few ways - more on that when things are actually set in stone. It was also a happy coincidence that this season looks dreadful on paper.

I can at this stage confirm a few things:

I'm going to put off writing first episode posts for most series, and will probably only write ones for the viable options. After that, I'll probably give it another episode to decide which series I'll blog.