I have finally gotten round to checking out the Hellsing Ultimate Episode 8 after rewatching the first 7. Episode 8 packs quite a punch, with an unexpected turn of events and it ends on a big cliffhanger. 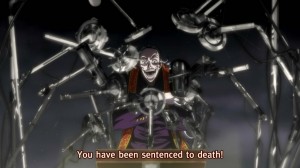 The episode starts with the new appointed Archbishop Enrico Maxwell declaring war on both the Last Battalion and Great Britain, and leading his forces on a blood filled genocide of London. Meanwhile the Major is conducting the battle as if the soldiers are the instruments. However Father Alexander Anderson does not agree with Archbishop Maxwell and becomes enraged since he believes Maxwell is no longer carrying out the will of God but is abusing the power of God. The Iscariot then are about to attack Integra when Seras suddenly appears in her complete Vampire form and saves her. Then a ghost ship is sailing down the Thames, and Alucard then jumps out and enters the battle and lands in between the Vatican's army and the Last Battalion. Anderson and The Captain follow suit and approach Alucard, then they all look at each other and Alucard calls Integra for his orders. Integra tells him to destroy both the Vatican's army and that of the Last Battalion, she also releases his Control Art Restriction to Level Zero. Alucard then gets attacked by everyone and says "The bird of Hermes is my name, eating my wings is my tame" and this opens up his coffin to release an enormous amount of familiars into the ongoing battle. Once this happens both Maxwell and Anderson suddenly figure out that Alucard's real identity is Count Dracula (also known as Vlad the impaler). Alucard's familiars change the direction of the battle and it now becomes completely one sided, namely Alucard's side was destroyed the other forces. Maxwell also dies at the hands of Alucard's familiars, but with a bit of help from Anderson who breaks the tektite composite glass allowing the familiars into the glass box of Maxwell's. Alucard is then seen with Integra and Seras, Alucard is greeted by Integra as "Count" and he greets her as "Countess". Anderson then attacks Alucard, but he is overwhelmed by Alucard and one of his arms is broken. Anderson is then backed up by the remaining Iscariot, then Anderson uses an object called Helena's Nail to transform into a monster capable of destroying Alucard. He then attacks Alucard and is fighting on the same level as him if not stronger, soon after this he sends a bayonet through Alucard's head. Alucard then looks like he has lost and all his familiars set ablaze and so does he.

The Major seems to enjoy the battle very much, he also seems to have everything planned out. If he planned everything out then does that mean Alucard will die Isn't his aim to destroy Hellsing completely I assume that the act of Alucard and the Hellsing Butler destroying the Last Battalion 50-odd years ago must have really put a hamper on his plans.

Why does Anderson believe suddenly that Maxwell is abusing his power Does Anderson draw the line when it involves people rather than just Vampires, because it seems that Maxwell is against anyone who isn't a Catholic. Maxwell seems to regard both the Vampires and the Protestants as one and the same, they aren't Catholic and therefore have sinned. I wonder why Anderson went as far as helping Alucard's familiars kill Maxwell, I assume that Anderson's beliefs are that Maxwell should die for abusing the power of god.

It seems Level Zero is the highest release for Alucard, remember the other release levels he has used in previous battles Maybe they only allowed certain abilities of those he had sucked the blood from. Another thing is that it seems if Alucard sucks someones blood completely, then he also absorbs their soul. Seras also has a similar ability, which was shown when she sucked Bernadotte's blood in Episode 7. Alucard also seems to be able to summon those people as well. Also it seems every time Alucard dies he is using the life of a familiar to die instead of himself, well thats what I figured from when Anderson asked how many lives Alucard had. The funny thing is Alucard is Dracula backwards, I'm surprised the Vatican had not made that connection sooner.

Could there be a Alucard x Integra romance maybe Seems like they seemed very happy to meet each other, and Alucard in his Level Zero release seemed a lot more refined and caring. Integra and Alucard both called each other "Count", but maybe I'm just over reading things.

I noticed that after Alucard was in his Level Zero release, he seemed no longer to be the battle loving person he was. He seemed like he was sad inside, he showed more emotions rather than pure enjoyment of the battle. Maybe no longer having all those different souls within him allowed his real emotions to come to the surface. He also seemed to give off a vibe like he didn't want to live any more, he wanted a strong enough human enemy. It could be that he wanted someone on his same level that is human, or that he wanted to die at the hands of a human. It must be very hard to live many years, well at least more than 500 since he mentioned a human tried to kill him 500 years ago.

This episode had a lot of food for thought, the trailer for the 9th episode is out. I'll have to get round to watching that. So this means 2 more episodes left! About 1-2 years and Hellsing Ultimate comes to an end.