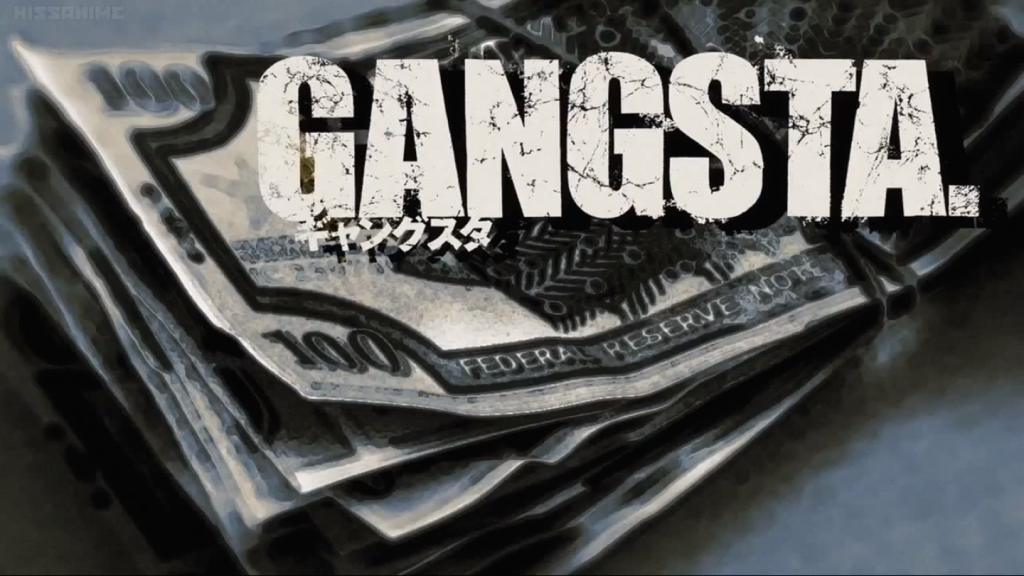 The Summer 2015 anime season kicks off with one of the more anticipated series of the season.  The story of the Handymen will seem all to familiar to fans of a certain anime, but the first episode suggests this series will stand on its own feet.

If you haven't guessed by now, the anime Gangsta. resembles is Black Lagoon.  Both series are set in corrupt cities and feature less-than-conventional main characters.  In the case of this series, it's the duo of Worick and Nicolas who are better known as "The Handymen" - a job that deals with taking care of jobs for everyone, be it the mafia or the police.

The episode gave us a very basic introduction to the two protagonists, without divulging too much.  We do get confirmation that Nicholas is deaf and an expert lip reader, but a big part of his identity - the Dog Tag - is only mentioned.  Based on the episode, it's likely he'll get a little more screen time so we'll probably learn about it later on.  Otherwise, not much else is revealed. Worick's background is gets no attention and the rest of the episode introduces other characters in Ergastulum without focusing on details.

By not throwing a lot of information at the viewer and giving a taste of action scenes to come, the first episode followed Black Lagoon's first episode formula.  That said, in terms of style, the series have pronounced differences.  The first of episode of Gangsta did a far better job of setting the scene.  There were numerous moments involving sex and drugs that effectively portrayed the rough conditions of the city and the grittiness of the series.  Another effective tool used in this episode were the cutaways to Alex (the prostitute), which reminded us constantly the harsh nature of the city in which Gangsta is set.  By doing this, it became easier to ingrain her as a main character at the end of the episode.  Instead of forcing it, it was a smooth transition.

Most impressively, was that the episode managed to be both more crude and more stylish than Black Lagoon.  The instances in the episode involving sex were blunt and, at times, something you'd expect to see in an American TV series.  The violence was also escalated, but we only got a sliver in this episode with expectations of more to come.  Style was added thanks to the very well-selected soundtrack, which gave the episode some refinement.  Instead of giving off a vibe of unbridled violence, it felt more like watching an episode of a cool crime/gangster series with a more serious plot in store for us.

All in all, Gangsta is off to a strong start.  The first episode did a great job of setting the scene and the brief introductions to all parties and characters was a good move.  Luckily expectations have been met, and hopefully the series will continue in this spirit.