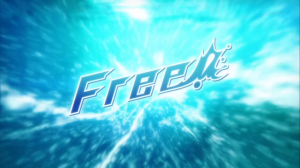 At a Special Talk Event for Free! Iwatobi Swim Club today, it was announced that there will in fact be a second season of our favorite swimming boys!

This news has not only been confirmed by ANN, but also Free!'s official twitter. This is welcome news, indeed, although it should honestly come as no surprise.  The end card in the last episode of the first season gave us the "see you next summer" message, which was a pretty conclusive confirmation in its own right of a second season.  That coupled with the series's popularity made it fairly obvious that a second season would make money, at the very least.

As excited as I am about a second season, though, I feel some trepidation about it.  What exactly will a new season entail?  What will the plot be?  The first season's plot was wrapped up very well: Rin is now friends with everyone again, and focused on his own goals rather than accomplishing his father's; Haru grew as a character from caring only about swimming to feel the water to wanting to swim for his friends and teammates.  Those were the basic plot points before.

The most likely thing that will happen is that Free! will basically be similar to other sports anime.  The focus may shift away from the characters' pasts and onto their futures.  There will likely be a lot more focus on training, on the Iwatobi Swim Club gaining more skill as a team, and on later tournaments.  I'm also expecting some focus on Rin's changing interpersonal relationships, given the changes in his perceptions at the end of the first season.

Whatever the plot is, fans of Free! will be happy to see more swimming bishonen.  Although this series doesn't necessarily need a second season, I'm looking forward to it.  You can definitely expect to see reviews from me once it's released, at any rate.