My frustrations keep mounting! Why does Hiro Mashima insist on adding an insane twist that has a lot to do with original plot whilst making us wait for the climax of this arc (i.e. the magic tournament) Why !

Another reason why I enjoy reading this series. 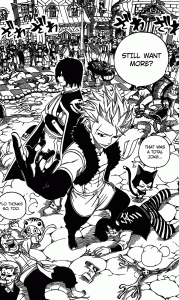 With the last chapter being a little bit too shojo for my taste, it was nice to get back to the original story as it gets closer to the magic tournament. As far as content goes there really wasn't much in terms of progression towards the climax of this arc, but a rather bigger progress in the dragon slayers story.

A nice bit of humour mixed into this chapter focusing on the new love "triangle" between Leon, Gray and Juvia.

It was only a matter of time before we were officially made aware that Rogue and Sting, the new dragon slayers, are this arc's antagonists. If anything, we can expect them to end up utterly defeated or turned into new comrades, the latter being very unlikely due to Natsu, Gajeel and Wendy's connection to their dragons.

I really did feel that Mashima-sensei did a great job of keeping us on our toes with Rogue and Sting; will we come to like them or will they stay as detestable as they are. It would be a shame for there to be another addition of dragon slayers to the guild and on top of that it would be better to actually have a few of the dragon slayers as enemies - hopefully that was Mashima's intention when he made the duo dragon slayers so unlikeable. 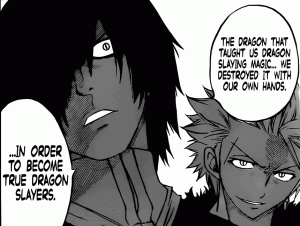 The only thing I really didn't care for was the separation of dragon slayers into "generations" - the whole concept was just so useless but more than that it makes me feel that when the battles ensue there will be some very predictable dialogue. Otherwise the chapter had a nice intensity to it, something we can expect to pick up from the next chapter.