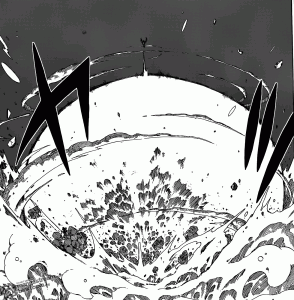 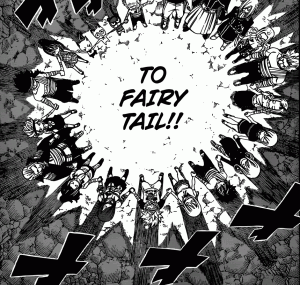 Last week we saw Master Makarov telling his "brats" to escape while he took on Acnowlogia but this week we witness one of the biggest turning points in the Fairy Tail manga.

Seriously surprising how the guild turned back to save Makarov and even more surprising how they essentially allowed the Island to be destroyed by Acnowlogia! But Hiro Mashima has made me love and hate that chapter. So all I can think about is who is the boy standing and staring towards the sea Have the main characters truly been killed off Who was the girl on the island praying What happened to the guild And of course, what can we expect from the 7 year time skip

Question 1: Well for all we know that kid can easily be Macao's son Romeo. This is easily feasible since he would have been back in Magnolia plus he had always expressed his desire to become a great wizard. Since a huge theme in all manga's is about protecting the next generation this seems even more likely, but what type of magic would Romeo be using

Alternatively this could be an introduction of an even younger dragon slayer, which I've been waiting for! But I am doubtful.

Question 2: A move such as killing off the entirety of the main cast is gutsy and very original. It hasn't been done before, so I do congratulate Hiro Mashima for shocking us all, but is it necessarily wise to do so A big part of enjoying manga is getting attached to the main characters especially as they develop and progress to achieve their dreams. If the main characters have been killed off, the manga could take a turn for the worse particularly if it's seems like a restart of an adventure. But I am hopeful because Mashima-san has been able to incorporate many different side stories and keep us guessing on what could happen next, so I could predict that this will be a side story like quest to find the missing survivors but I probably will be wrong! But all I can say for certainty is that I wasn't convinced by Zeref's of conviction of the idea that it was over.

Question 3: At first I thought it was a random image but who is that girl and what could she possibly be praying for Somehow she could be the reason that the members of the guild on the island actually survive. But where did she appear from And what kind of magic could she possibly be wielding

Question 4: Well the one thing we can guess to more certainty (still not 100%) is that the guild has lived on even after losing all of it's strongest members and somehow has avoided being taken out by the Council. Or again it could be that the boy (if we assume is Romeo) could just have that mark and the guild doesn't exist anymore.

Question 5: Unlike the One Piece 2 year time-skip this one has left me guessing. What indeed can we expect At this current point anything and everything. Whether it's outlandish or too tame, after this chapter we can only speculate! The guild might have gone into hiding, the members who were on Tenroujima might be settled down somewhere or we might be introduced to all the dragon slayers within the next 2 chapters.

One last note: damn you Hiro Mashima! You have dropped this huge bombshell on us and our now expecting us to be okay with everything you have done Yes the chapter was awesome but now I want the next 20 as to satisfy my appetite for Fairy Tail manga.

Next week's chapter will blow all of our minds no doubt!