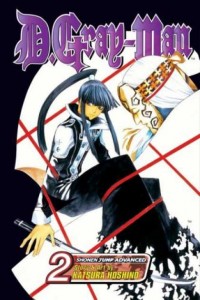 The second volume was something I was initially looking forward to reading, but after doing so I'm not so sure whether the feeling of excitement towards the series was premature or just this volume was quite a big let-down on it's own.

So which is it

So to sum up this arc in a few words: Allen is dispatched for his first mission with from the Black Order, to be completed with his new rival Yuu Kanda, in order to to retrieve "innocence" found in haunted town in Italy.

The story has been done before, but it's what's to be expected from a second arc from any series with this type of fantasy background. Even though, the story is a bit clich and something any fan of such stories would have seen numerous times, we do get to witness some good pivotal moments.

The best moment in this arc is actually the ending where we get to witness Allen's despair and his realisation of his situation - he wants to fight akuma to save them - so the realisation of how hard it's going to be to keep up his wish, whilst respecting the souls of the akuma, is a great moment in his character development.

Another good moment in this volume would have to be when more information is revealed about Yuu Kanda's powers, which does leave one with the desire to continue reading.

Not the worst volume I've ever read but not one I would gladly shell out cash for either. The problem with this volume was that it pretty much only displayed Allen and Yuu's battle strength and showed us an insight into their emotions and personalities.

As far as story progression goes, it sucked. Quite boring and a real let down after reading the first volume, so if you want to read D.Gray-Man just be warned that this chapter will slow down your momentum in reading it.