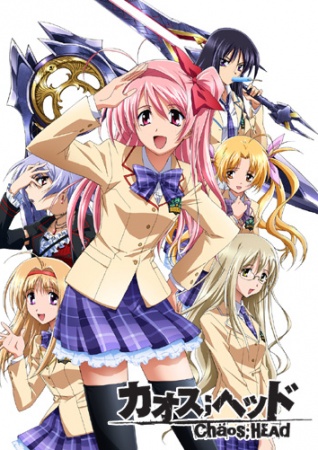 I had picked this anime after someone on Gaia, posted about a similar anime called Higurashi no Naku Koro ni. At first I felt like I shouldn t be watching this, it was weird. Felt like Welcome to the NHK at the start. Immediately felt like it wasn t my cup of tea. But I had decided I should finish watching it. Well, might as well get stuck into this Chaos Head review then shall I

The story was different from any anime I had seen thus far, had a similar feeling to Evangelion and RahXephon. There is a psychological background to the story. It isn t action packed, but there is action. It centres around a character called Takumi Nishij , who is extremely paranoid about everything. The story develops as he develops, and you learn more about him and what is happening. From the start to the end Chaos Head gives the feeling of something weird is happening here, then you get the run of the mill save the world story. But for a 12 episode anime, the story was developed quite well. [Score: 7/10]

The art is quite good, but similar to many anime s out there right now. Although I was delighted with the fact that the fighting scenes were drawn very well, and there wasn t a change in the style of drawing half way through the anime. All in all, the animation was good too. [7/10]

The sound track was decent, not great. The opening and ending were normal, not really something that I would listen to over and over again like I did with Trinity Blood s first opening. The music that came in the final battle was not that good, I was like you have got be joking me. But the music soon changed to a better one. The voices were done well. I liked Takumi s voice the most, I have to admit it was cool. [7/10]

The anime is one you can see, not epic like Code Geass (some may argue the other way) or Bleach (epic in different ways), but it is one that is great for a quick watch being at only 12 episodes. Just a 4 hour sitting, like watching 2 movies back-to-back, and you ve seen the anime. I think what I would say was good about this anime was its story, and the main character, the character is unique and unlike the main characters you generally find in animes. So I give it a 7 out of 10.