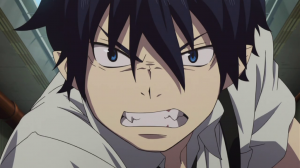 The younger Okumura brother has been approached by a man claiming to by his grandfather who has also created an Anti-Demon Task Force of his own. I wonder if he takes up the offer handed to him, even though he himself is undergoing some sort of transformation. Also since the grandfather didn't invite the older brother because he has already awakened as the Son of Satan, does that mean the Task Force will go after him Will the younger brother be ok with that I wonder.

Rin has seemed to even get Neigaus's wife on his side, originally she was the one who attacked all the people at the monastery and the boys dormitory. But eventually after seeing Rin protect her, she protects him from a bullet aimed at him. Then Neigaus and his wife escape. But at the end some bells ring, apparently they signify an urgent summons from the Vatican.

So some new questions were raised here. Who resurrected Neigaus's wife Is Mephisto really behind the artificial human experimentations What is the urgent summons by the Vatican about Most likely they are all connected! Mephisto does seem like a shady guy and it could well be possible that he is the answer to all those questions.