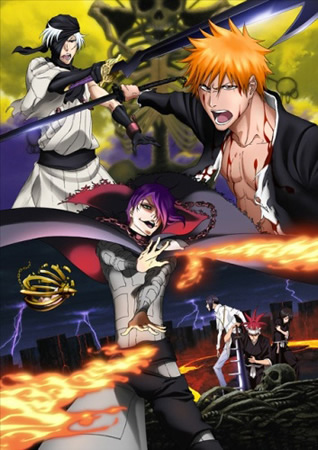 Just for the record, I'm not a big fan of anime films adapted from long-running shonen manga. Most of them have some ridiculous plot and the fighting is just a repetition of what we have already seen in the anime series but in a more stupid form (if you've watched most Naruto films you must understand where I'm coming from), but Bleach Hell Chapter (Jigokuhen) is quite different.

Seeing as how Tite Kubo-sensei was involved with writing the scenario for the movie, Hell Chapter ended up being a better watch than I expected.

First of all, the film when the film was first introduced through a special episode already tickled my fancy especially when we witnessed Szayel Apporo Granz and Arroniero fall victim to a mysterious group in what is later revealed to be hell. We then proceed to find out they need Ichigo; but not shinigami Ichigo, rather full hollow Ichigo. This already seems to be more of a believable and anime related plot (minus Ichigo still having his shinigami powers) and as we have already witnessed the gates of hell appearing once the plot just improves the film as a whole.

So we start off in Karakura where Ichigo and his crew are unable to identify a strange reiatsu. Naturally they encounter their enemy rather soon only to discover later from Renji and Rukia that they are "Sinners" have escaped from hell and to make matters worse they take Karin as bait to drag Ichigo to hell where they have some unknown plan to use him.

Before Ichigo makes the obvious trip to hell, we are introduced to Kokuto. Kokuto offers to guide Ichigo through hell (as he too is a sinner) and Ichigo gladly accepts as he has a time limit to bring back his little sister. But can he really trust Kokuto I'll leave that up to your imagination.

Not to go into too much detail, the fights between Ichigo's friends and the sinners is a good watch. But the main attraction of this film, is seeing more of Ichigo's hollow transformation.

As far as anime films go; probably my favourite since the first Naruto one!