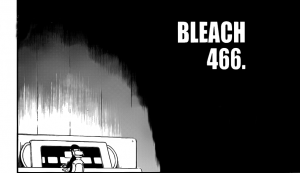 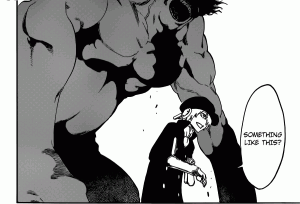 So this week we return to a continuation of the fights between the Gotei 13 and the Fullbring users. This week chapter mainly deals with Yujio and Hitsugaya, esentially a battle of the youngsters. Let's review:

First off the chapter begins with the conclusion of the fight between Jackie and Renji, with Jackie lying on the floor defeated and Renji refusing to finish her off because he considers any man who raises his hand against a woman to be scum. But soon enough Jackie reveals that Yukio has programmed the dimension to only allow one survivor and with that being said the dimension starts to collapse.

Even with this event occuring Renji still refuses to kill off Jackie and tells her that they will somehow escape together. Overcome by emotion she thanks Renji for being a good person and sacrifices herself in order to help him escape but back in his "room" Yukio considers Renji's chance of survival to be slim or none. Just as that happens, Hitsugaya bursts in and they start to battle.

Hitsugaya, unimpressed by Yukio's powers, angers Yukio and keeps referring to his long winded monologue as useless "chit-chat." Yukio then starts an keeps creating an array of monsters that ordered to follow Hitsugaya wherever he goes and kill him but he runs into a problem when Hitsugaya manages to catch him and freeze him to the ground as well as his fullbring. And that's check mate! Why Because with a frozen fullbring Yukio is unable to change the settings and is about to be devoured by the very monsters that he created.......An almost poetic ending if you ask me.

So with 3 fights down we can expect that next week we will either see Rukia or Byakuya fight and at this going rate we can expect to wrap up the remaining fights (minus Ichigo's) in about 3 weeks time! Obviously the fight between Ishida, Ichigo and Ginjo is going to take longer but I wouldn't call it a stretch to foresee the end of this arc by the new year.