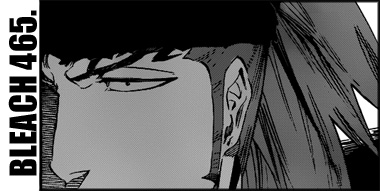 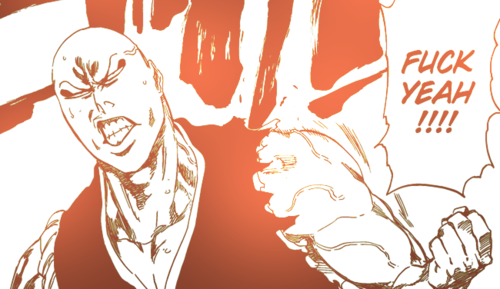 Back to the one-on-one fights between Fullbring users and Shinigami!

If you've forgotten what happened the last few chapters lets refresh your memories. The shinigami have returned to the ordinary world to restore Ichigo's powers and have now started battle with the powered up fullbring users. It's all one-on-one thanks to Yukio's Invaders Must Die fullbring. Kenpachi has already effortlessly defeated Giriko and now the remaining battles are Hitsugaya vs Yukio, Rukia vs Riruka, Byakuya vs Shokuro, Ikkaku vs Moe and Renji vs Jackie.

So let's see what this chapter has in store for us.

It begins with the focus now on the fight between Ikkaku and Moe. Ikakku still doesn't understand Moe's fullbring "Jackpot Knuckle" and is baffled by his punching power, especially when Moe lands a punch onto Ikkaku's shoulder. No reason to fret because Ikkaku has now a beefed up body, with which he managed to fix his dislocated shoulder by just tensing his muscles! I might have grown even fonder of him just through that act, and I'm a huge fan so I'm expecting even more from him in the upcoming chapters.

Then we move onto Renji and Jackie, where the page starts off with Renji refusing to attack a woman first even if he is weaker than her. He then goes onto comment on the "motorcycle engine" strapped to her chest, which she gladly shows off as her new fullbring; now instad of "Dirty Boots" her entire body becomes stronger when it gets covered in filth.

With this said she attacks Renji head on (at this point he still hasn't moved an inch) and lands a kick after Renji's initial dodge. Jackie thinks that kick was enough but becomes angered when Renji, unphased by the first hit, requests her best shot so she gives him what he wants. This is where I got really excited about the progression of the shingami's strength: Renji stops the kick with just one arm and injures Jackie by just drawing and hitting square in the stomach with the top of his sword handle. This is the result of training for 17 months in order to fight Aizen.

A pretty intense chapter, which has left me hungry for more and made me even more impatient! Especially since Hitsugaya has yet to show his true strength or even Rukia who has now been promoted to 13th squad vice captain. I was saddened when I realised as this arc comes to an end, Kubo only plans to draw one more arc!