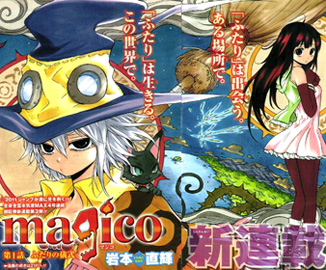 Ok so it's been a while since I've reviewed something so I thought I would start again with a relatively new manga running in WSJ; Magico. So as everyone should know Fairy Tail runs in Weekly Shonen Magazine, so it's not a huge surprise that a manga based around wizards has finally made it's way into Jump but the question I first asked was can I really be bothered with picking up another manga about wizards

The manga has an interesting premise. A young wizard by the name of Shion (who is already renown throughout the world as one of the 3 great sages) takes it upon himself to rescue a young girl by the name of Emma by marrying her right from the first chapter..........Why

Well there are 2 reasons: first of all this girl happened to save his life years ago and he has never forgotten this (although she has) and secondly this girl is an Echidna - a once in a 500 year beauty who can cause anyone to fall in love with her, the side effect of harbouring a demon in her heart which also happens to be a demon sought after by many. Evidently this means that she is in danger of getting her heart ripped out of her and that's why Shion saves her right from the first chapter and obviously she ends up marrying him.

So what's next for the happy couple Well there are a series of rituals they must perform in order to suppress the demon in Emma's heart and with this they start their journey in order to fulfil the conditions necessary to set her free from her cursed fate.

It's certainly different to Fairy Tail and does have a certain charm about it, but the question I was asking myself whilst reading up to chapter 7 was: Is this a fantasy romance manga There are obviously battle scenes in the manga so it's not all romance but somehow as the plot revolves solely around the love Shion has for Emma and her gaining more love for him with the fantasy battle aspect only coming in subtly in the background.

There are some refreshing aspects of this manga though, namely the fact that the author has chosen to go with a plot based in a world where magic can be acquired by anyone through completion of necessary rituals and the modernised aspects of patenting certain magic rituals. These aspects definitely appealed to me but that maybe because I am a business student.

All things said, considering this manga start being published in February and has managed to secure a colour centre for it's second chapter. Also it has all the stereotypical aspects of manga based around wizards, such as a talking cat and a pet dragon. Will it continue That's for the readers to decide but seeing as Jump was missing this type of manga it might become a hit, especially since it already has so many manga with battle centred themes (Bleach, Naruto, One Piece, Gintama, Hunter x Hunter and KH Reborn!).

I personally found it refreshing, but nowhere near as powerful as Fairy Tail so I think I'll take my time in reading