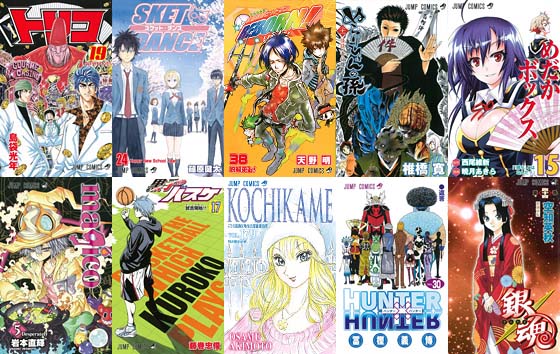 Lot's of changes this time round for Jump: the ending of 3 series to be exact.

But before that if you direct your attention to the picture above, you will see all the tankobon covers from these Jump manga that shipped on April 2nd. And now I would like you to consider the following: all of these volumes made it onto the Oricon Top 30 Best Seller List in their first week. Not only that, the first 10 spots are held by manga running in Jump (2 running in SQ).

(The manga in bold run in Jump SQ so I included them anyway).

Quite a few of these figures won't surprise many and they shouldn't but in particular 2 manga's stand out on this list: Hunter x Hunter and magico. I'm surprised with Hunter x Hunter's herculean sales performance especially since the manga has been on hiatus constantly and the fact that this was the first volume published in 8 months. Safe to assume that absence really does make the heart grow fonder Probably.

Magico on the other hand ended up being a surprise since it's done well and had to compete against the shonen heavyweights, most of which are in Jump. Not only has it been around for just over a year but since it's last volume it improved it's week 1 performance by close to 9,000 copies, Can people smell the anime Maybe and with so much change going on with Jump it's become a possibility for an adaptation.

We say our farewells to ST&RS and Genson! Kosai Seibutsushi Pakki. ST&RS was saved from being cancelled just as Hunter x Hunter was put back on hiatus, however it couldn't turn things around and ended with it's 39th chapter in Issue #20 which was released this week and Pakki is set to finish on June 4th by which time it would have only garnered 29 chapters.

Not particularly sad news for me since I don't read Pakki and never got into ST&RS, so I'm seeing this as an opportunity for Jump to bring out some new interesting series. This does mean that the manga that are most in danger of getting cut next are magico and Kurogane, but since they have been spared for presumably another 2-4 months I hope they pick up the slack and manage to compete with some of the new series that are starting.

A Sad Yet Understandable Farewell

So a lot of speculation has been circulating sites like Mangahelpers as to whether this manga will end in the next few weeks or not; the conversation is of course regarding Bakuman.

Even though it isn't 100% confirmed, the ending of the series is in sight and can occur in as little as 2-3 chapters time. Next issue of Jump (#21) the series has been given colour pages to celebrate a certain proposal and after having skimmed through this week's chapter I'm inclined to agree that the manga has now entered the stage of wrapping up. Starting with the previous chapter (174), it seems the manga has been tying up all loose ends in the story by going back to all the mangaka that Ashirogi Muto have encountered.

Am I sad A little but only because it was about time that Bakuman would wrap up and I like how Ohba and Obata-sensei are planning to leave no part of the story unfinished. As a slice of life manga, Bakuman has dominated like no other but much like a slice of life manga it had to end some time so for another great manga I would like to thank the two sensei's for their hard work and time spent on the series, for almost never taking a break and for officially getting me into the slice of life genre.

I just hope they don't go their separate ways.