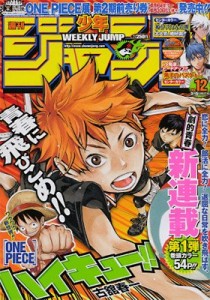 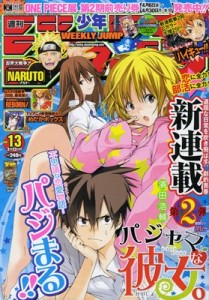 Ok, so this past few weeks Jump has seen a range of changes, from introducing new series to putting more emphasis on new ones and to cancelling (maybe more than one) series. Also since there is some relevant news regarding anime based on manga running in jump, I'll add some information on that as well.

Pajama na Kanojo - So in a rather unprecedented manner (for Jump anyway), they are now publishing another romance manga; of course since they already have Nisekoi and to some extent Magico counts as well a romance-type manga, this series goes to the traditional roots of romance manga for all Japanese boys by being a lot more ecchi than Nisekoi will ever be (he wrote this hoping that it will be the case since there is yet to be an ecchi chapter in his 2nd favourite romance manga currently running). Besides that rather obvious difference in the two manga, Pajama na Kanojo follows a much more western fairy tale/disney storyline, something that I have yet to approve or disparage but one thing that is definitely true is that this type of romance doesn't seem to appear a lot in Jump and in a way is very refreshing since most romances in Jump tend to stick with stories involving love triangles.

High Kyuu!! - This was the series that replaced Kagami no Kuni no Harisugawa and is about volleyball. Honestly I don't know what to think about this manga and it doesn't help that no scanlation group is interested in picking it up and the 4 chapters just have their raws sitting there untouched. Whether that's an indication of quality or not I can't say but it seems to me that volleyball won't necessarily be a popular sport in Japan and for that reason the series might already be at a disadvantage. I have not heard great things about it but who know's it might be the case that in a few years there might be an anime (however unlikely it may seem like right now).

I'm not sure whether Jump should be concerned that their current readers might not respond to these two new series. Frankly speaking until from 2009 until just September last year Kuroko no Basket was the only sports manga running but now with High Kyuu!! being added to the roster we have a total of 3. When it comes to romances, I'm not sure whether Jump are in the habit of running more than one at a time but I'd like to see which one will come out on top; a battle of ecchi vs pure romantic comedy. 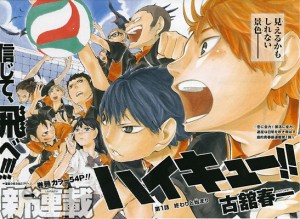 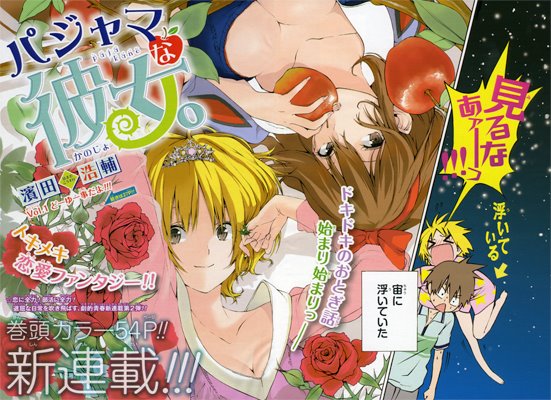 Who Jump's Betting On

Kurogane - When you only have 26 chapters but have been given 5 issues with colour pages, you must be very popular or sell well. In reality Kurogane doesn't sell that well, only around 16,000 for it's second volume so nothing to brag about yet it does do well in the ToC rankings. Maybe it's a series that people who buy Jump enjoy and possibly it's a series that will end up making kendo more popular not just in Japan but possibly worldwide. I say this, but in my mind I know the series is still lacking something essential for it to be a great read but Jump has faith that the series could potentially evolve into a flagship,

Nisekoi - Nisekoi has gotten a colour page or two 17 chapters in, an accomplishment on it's own if you consider how unlikely it is that a romance will rank that high in a magazine like Jump. Overall it seems to be solid in the rankings and unless Pajama na Kanojo can become more popular, it looks like it might stick around for a while.

Hunter x Hunter - Togashi-sensei has reverted back to his compromised artwork which he used for most of the chimera ants saga. This is a problem since not only are fans disappointed due to the low quality of artwork which is also guaranteed to affect it's rankings but the more serious concern is that Togashi-sensei might still have problems with his health. I do hope that this is relatively short-term but the priority is for the mangaka to get better.

UPDATE (14/03/2012): Hunter x Hunter is being put back on hiatus as of Issue #17. The latest chapter seems to be the second part of epilogue for the entire chimera ants saga and chairman elections which also sets up the new arc/saga (it might have been the case that Togashi-sensei knew that he wouldn't be able to go on for that long without a break). And that concludes the longest post-hiatus run this series has had.

Bleach - So Bleach will finally end on the 27th of March and it's timeslot will be given to Rock Lee's Springtime of Youth. I can't say I'm too surprised about Bleach's anime ending since they had to go about 1 year of showing just fillers, something that's already hard enough to do with series that lend themselves to several filler arcs but in Bleach's case the filler arcs themselves became unbearable and worst of all not following the timeline of the story. Since the manga itself hadn't progressed enough this news wasn't particularly shocking,

If any Bleach fans are saddened by this, some of you might like to know that Warner Bros. might actually be moving ahead with the plans for the live-action adaptation since they have put their re-imagining of Akira on hold.

And for now that shall do it!