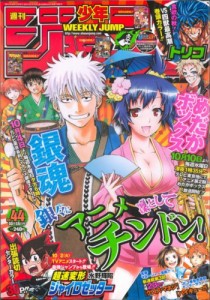 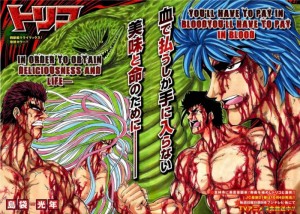 It's late I know, but I'm bedridden and reading Weekly Shonen Jump was a herculean task. I'm going to keep it short this time, since chapters from the next issue are already online, but stay tuned for the reviews if you want! 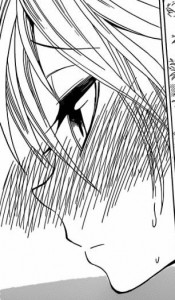 It's moments like this that I truly appreciate Nisekoi for the romance as well as the comedy. It's also a happy coincidence that these great moments include Onodera.

A beach episode is as romantic comedy clich as tsunderes but its always a cute little distraction from any romantic development; not in this case. I'm impressed that Nisekoi has managed to turn the typically pointless beach scene into something more, and even more-so by focusing on the main love triangle.

Recently the harem has taken a back seat to the Onodera-Raku-Chitoge love triangle and because of this chapter,, one can really appreciate the romance more. Onodera has always been that character who doesn't say much or simply shies away but it is her that always puts herself out there when it counts. In a way this chapter held a lot of similarity to chapter 27 when she admitted to making a promise with a boy.

Maybe this is a little premature or maybe it's my impatience but I think it is about time that Raku was forced to choose. As nice as the series continues to be, it has just about exhausted every option when it has come to anything but romantic development. This chapter gives me hope for something new and pleasant in the next chapter(s). 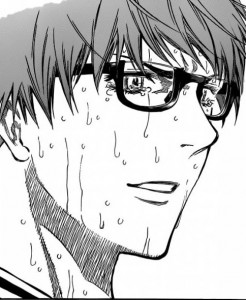 I don't know why this chapter works so well but it just does.

In any given series, a bitter-sweet result which is then followed by a light-hearted moment is just a recipe for disaster but somehow Kuroko no Basket pulls it off. Shutoku's loss was handled especially well, and we even got to see Midorima and Takao cry. This felt appropriate since its the first time these two characters have struggled with the odds against them and came close to playing at 100%.

A little annoying that Akashi's attitude and dialogue felt predictable and unoriginal but that wasn't unexpected. As the last opponent of the series it does suit him, but I would have preferred for him to be a little more original. It also felt unnecessary that Hirumo pondered about Rakuzan's true strength since I thought it was already implied that they weren't pushing themselves to the limit to win.

Then came the end. I don't know about anyone else but I certainly felt pumped up and warm inside when both sides declared war with their own variations of the lane-up. This also happens to be the first time that a match will be more fun to read than intense; we've had our share of nail-biting moments but reading something more fun is appreciated.

Now I guess it's time for Seirin to face off against their biggest rivals Kaijou, and it is time to see if Kagami can overcome Kise and the other Generation of Miracles moves all at once.

In Reborn!'s defence, if your not used to this manga being extremely predictable at times then you really shouldn't be reading it. However, it is because of chapters like this one that coming up with any relevant points of discussion is all but impossible.

With Tsuna at the epitome of his strength, Bermuda's victory has slipped away and most likely we'll be seeing the end of the fight in the next chapter. It feels like the arc will come to a close a little bit later when Checkerface is actually defeated but I don't foresee that being to soon since I'm also assuming that with Checkerface defeated, the story will end also.

Not much to see here if I'm being honest. 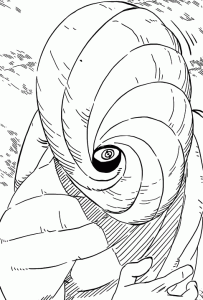 So by the way things are progressing in this chapter, it's safe to assume that this is one of those long and explanatory flashbacks instead of the short and sweet ones.

It's not all bad since we get to see more of Obito and the next chapter should clarify a few things about what happened with Rin. I'm still not the biggest fan of where the story is going but I'm hoping that the flashback will redeem the choice to make this war all about one guy and his quest for vengeance all for the sake of one girl.

Other than possible redemption with the flashback, the chapter felt half-assed and pointless. Did Kishimoto-sensei attempt humour with the conversation between the Zetsu's I don't know but I sure as hell found it stupid and not at all funny. Evidently there's a lot faffing about going on here and my guess is that it's a continued attempt by Kishimoto to extend this manga's life by as much as he can.

I wouldn't have felt that the majority of this chapter was unnecessary had there been more interesting dialogue or at the very least more relevant information as opposed to mindless dribble being passed off as comedy.

Average as always but let's see where series will go. 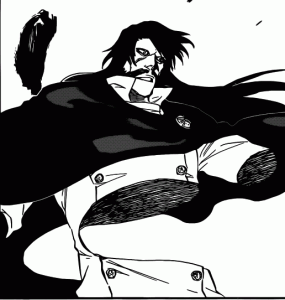 Yamaji's move is just ridiculous! However, that might not be enough for him to beat Juha Bach.

As expected with the conclusion of this fight, Yamamoto wins but doesn't really. Not completely surprising as Juuha Bach seemed like Ichigo's opponent from the moment he was introduced but nonetheless sad. Of course as expected, he didn't go down easily but instead with guns blazing until his last breath. Even his bankai's true strength bordered on the insane until his last move.

Now the next chapter should do its job with explaining who the impostor was - his last words being "Sorry Juuha Bach-sama" - and get down to Yamamoto's loss against Juha. A little sad to see Yamamoto loosing soon but what can you do. 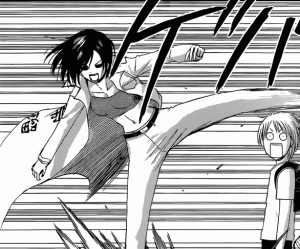 The flashback is a lot more serious than I had expected, thus leaving me conflicted.

I quite like it when Beelzebub has a more serious tone to it but I know it won't last. Besides this flashback, the most recent memorable serious moment was when Hilda lost her memories and was contemplating on never getting them back, but as we all know that ended in pure comedy.

The flashback isn't all serious but it's not the usual Beelzebub we're used to. Oga's sister definitely added some comedy to the mix - finally we get to see her as the leader of the Red Tails - and there were a few other moments that made me laugh as well as invoke some more serious emotion.

Not a bad chapter from Beelzebub if you like something different once in a while.

Author's Note: Sorry for the lateness and shortness, the next review should be more comprehensive.